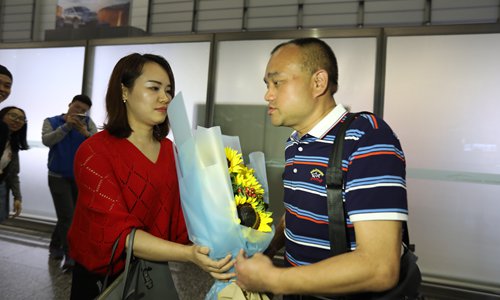 Tan Qingdong(right) receives flowers from his supporters after he leaves the airport on April 18. (Photo: VCG)

Three months in detention have left Tan Qindong a considerably changed man. On his profile photo, he is the picture of confidence: wearing his doctor's scrubs and smiling broadly with his arms crossed. Now, the 39-year-old doctor seems distressed and anxious."I want to cry. Freedom feels so good," Tan, from Guangzhou, South China's Guangdong Province, told reporters after he was released on bail from a detention center in Liangcheng county, Inner Mongolia Autonomous Region on April 17.Tan became a public hero after he referred to a popular Chinese medicinal tonic as a "poison" in his blog, and was then arrested by police from Liangcheng for damaging the reputation of Hongmao Pharmaceutical Company, which produces the tonic. According to an advertisement for the tonic, which contains over 60 Chinese medicinal ingredients, it can boost your kidney and stomach functions and also "cure 100 diseases," including bone aches and bad colds. Police from Liangcheng, where the company is based, travelled nearly 2,000 kilometers to Guangzhou to arrest him. This led to a public outcry, as people questioned why a civil dispute had to involve the police.Now free again, Tan said he doesn't regret posting the article. "But of course, I'll be more cautious and do it after consulting legal professionals. There have to be people who tell the truth," Tan told Red Star News."I want to share medical knowledge with people and promote popular medical science. This is what a doctor should do," he said.Hongmao released a statement on Thursday, apologizing for the negative impact the incident has caused. While it didn't mention Tan, the company admits that its dealers and retailers have violated advertising regulations. It says it will pull out all the commercials from China Central Television (CCTV), provincial satellite channels and local media, and launch a self-investigation in 31 provinces, regions and municipalities. Unforeseen consequencesOn December 19, Tan published a blog post entitled "Magical Chinese tonic Hongmao, a poison from heaven." In the article, he questioned the effectiveness of the famous medicinal tonic by analyzing its ingredients and effects. The conclusion, Tan wrote, was that the tonic was not only ineffective, but could actually harm one's health if consumed in excess.Later, Tan admitted that he used the word "poison" in the hope that it would get the attention of older people, who are more inclined to spend money on such health tonics.Tan isn't the first man to have questioned the pharmaceutical company. In fact, the company has been cited 2,630 times by food and drug authorities in over 25 provinces and cities for false advertising, according to media reports.However, small fines and punishments from the authorities did nothing to stop the company from investing huge amounts of money in advertising. Commercials for the tonic, featuring Chinese film stars and celebrities, can often be seen on Chinese television channels, including CCTV. According to CTR Market Research, the company spent 15 billion yuan ($2.37 billion) on advertising in 2016, and has a revenue of 5 billion yuan annually. In 2017, the company paid 350 million yuan in taxes, while Liangcheng's government revenue for that year was 400 million yuan. When Tan published the blog post, he had no idea of the consequences that awaited him. On January 10, four plainclothes policemen ambushed him in his apartment building, pushed him to the ground and handcuffed him. "I was completely dumbfounded when I was handcuffed. I've never encountered anything like this before. I only found out that it was because of my article during the first interrogation," he told Red Star News.After spending a night in Shenzhen, the men took him to Beijing for further interrogation, and then Liangcheng. Tan believes at least one executive from Hongmao also participated in his arrest. When he was being taken into a car in Beijing, he heard one man asking another not to smoke, saying "The chairman of the board hates that."Liangcheng police, however, denied Tan's claim that a Hongmao executive had anything to do with the arrest.Ethical motivesIn the detention center, Tan shared a room with seven or eight inmates in a 30-square-meter room. He was given two and a half steamed buns as staple food each day, and had carrot and potato soup for lunch.According to Liangcheng police, an employee from Hongmao called the police in December 22, saying Tan had made false accusations that misled readers. After the article was published, it was viewed 2,075 times. As a result, Hongmao lost two contracts worth a total of 1.4 million yuan.Tan's lawyer, Hu Dingfeng, said that as a doctor, Tan has no motive for defaming the tonic. "Tan Qindong said he published the article out of a doctor's professional ethics," Hu told thepaper.cn.Many of the facts in his article are from open publications, such as notices from China's food and drug authorities and reports from The Beijing News and Sina."There have been a lot of articles questioning Hongmao in recent years, and compared with them, this article is much less influential," Hu said.Hu's story drew sympathy from the public, and many media outlets covered his story. "It's alarming that some 'pillar industries' and major taxpayers can so easily and effectively criminalize civil disputes… What role Hongmao really played during the arrest is worth examination," said an editorial on Southern Metropolis Daily.On April 16, China's Food and Drug Administration said that over 137 cases of adverse drug reactions were reported by consumers from 2004 to 2017, and asked Hongmao Pharmaceutical Company to explain its false advertisements to the public. The next day, the official Weibo account of Inner Mongolia's Procuratorate said it had asked Liangcheng's public security bureau to carry out additional investigations and change its coercive methods. Tan was granted bail the same day.