BEIJING -- Doctors Thursday called for immediate diagnosis and treatment of Parkinson's disease when about 1.7 percent of Chinese people above 65 were overtaken by this disease. 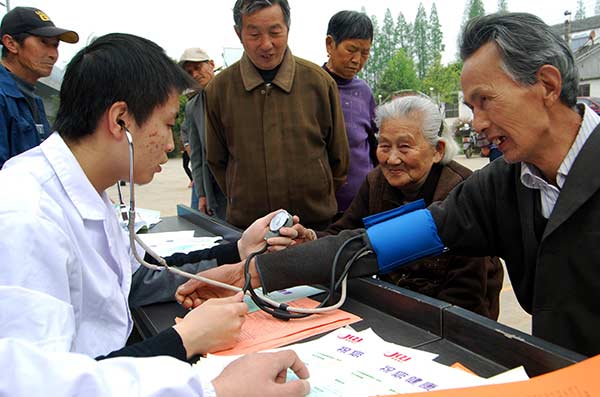 A doctor provides checkups and information on Parkinson's disease in a rural community in Zhenjiang, Jiangsu province. (Photo: China Daily)

Early diagnosis and intervention of doctors is very important for controlling Parkinson's disease, which is chronic progressive, said Chen Biao, chairman of the China Parkinson Alliance and chief of the Parkinson's Disease Research and Treatment Center of Xuanwu Hospital, Capital Medical University, at an event on the World Parkinson's Disease Day, which falls on Thursday.

"It is not the end of the world when a person is caught by this disease," said Chen Haibo, director of the Neurology Department of Beijing Hospital, at the same event. "With professional treatment and intervention patients can live a quality life."

China has more than 3 million Parkinson's disease patients, accounting for nearly 60 percent of the total in the world, according to the National Clinical Research Center for Geriatric Disorders.