Chinese doctors and scientists have pointed out the many flaws of a Harvard study that used satellite imagery of hospital parking lots in Wuhan to conclude that the coronavirus may have emerged as early as autumn last year. They believe the flawed paper, which has not even been peer reviewed, is yet another poorly organized attempt of the US to throw mud at China's hard-won battle against the virus. 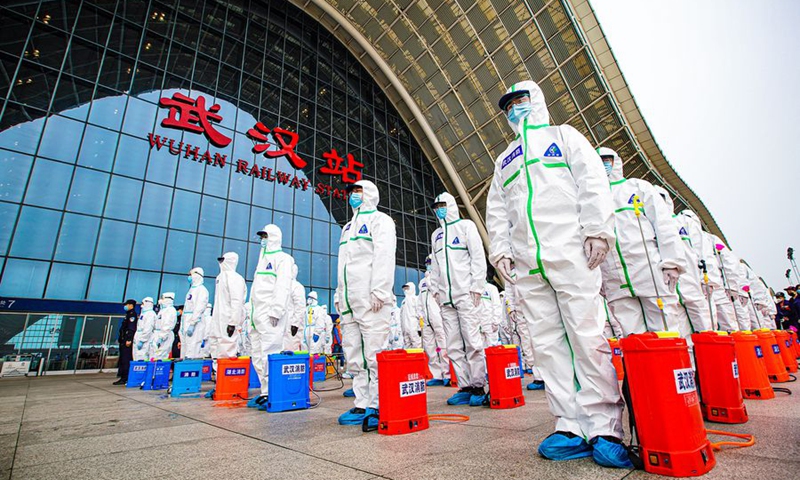 They rebuked the points of the paper, saying they didn't experience a surge of cars parked in the hospital parking lot or patients with COVID-19 symptoms in Wuhan last autumn as the paper claims. Chinese experts also said the satellite image, which supports the whole paper, was deliberately taken from different angles to show the sharp contrasts.

The fact that such a preposterous paper was published by the world-renowned Harvard University has stunned the Chinese public, with many netizens and experts saying the university's kowtowing to the US political conspiracy against China is a destruction of its time-honored fame in China and will obscure its reputation among Chinese students.

Researchers from Harvard and Boston universities came to the conclusion after analyzing satellite images of hospital parking lots in Wuhan, and queries in China's Baidu search engines about symptoms such as coughing and diarrhea.

"We observe an upward trend in hospital traffic and search volume beginning in late summer and early fall 2019,"  Elaine Okanyene Nsoesie, together with John Samuel Brownstein, professor of Biomedical Informatics at Harvard Medical School and several other researchers, wrote in a paper released online but was not peer-reviewed.

The Harvard scientists extracted data for Wuhan hospital parking volumes between January 2018 and April 2020 and found a steep increase in traffic that began in August 2019 and peaked in December.

Three doctors from Wuhan's Zhongnan Hospital and Wuhan Tongji Hospital, which were cited in the Harvard paper, all rejected the paper's claim that they received more patients with fever or diarrhea symptoms than usual last autumn.

"This is totally inconsistent with the facts. If what the paper said was true, that the virus was circulating earlier, the outbreak would also have emerged earlier given the virus' highly contagious nature," Peng Zhiyong, the director of the intensive care unit of the Zhongnan Hospital of Wuhan University, told the Global Times.

Those doctors also denied there had been a sudden surge in traffic around the hospitals.

The study also posted a picture of traffic conditions at the Hubei Maternal and Child hospital, where an area in front of the main building that appeared empty in 2018 was filled with vehicles in autumn 2019.

A source familiar with the area told the Global Times that the hospital in question, which was captured by satellite image filled with cars but empty in 2018, had been undergoing construction since 2019 to expand its parking area.

An employee from the hospital confirmed with the Global Times that the spot shown on the satellite map is a parking lot, and had just finished construction recently.

Comparing those satellite images, the number difference in the 2018 and 2019 pictures is only a few hundred. Chinese netizens questioned if a difference of a few hundred vehicles meant anything in a city with 10 million residents.

Wuhan authorities said the number of motor vehicles in the city was 3.2 million as of March 2019, an increase of 278,000 compared to last year.

Analyzing satellite pictures taken in 2018 and 2019, satellite experts told the Global Times that some of those pictures were not taken from the same angle. Take the ones taken at Zhongnan Hospital as an example. Fewer vehicles can be seen on the 2018 photo because it was obviously taken from an angle of inclination. Thus, many cars were blocked by buildings and couldn't be seen in this picture, while the 2019 picture was taken from a vertical angle, which gives viewers a clearer view of vehicles.

An anonymous expert told the Global Times that the satellite picture was taken by RS Metrics, who used a satellite system which transits China around 10am, while a 2018 picture of Wuhan's Tongji Hospital suggest it was taken by Worldview-1 satellite, whose transit time is around 1pm.

Comparing satellite images of traffic taken at different time is below par, as the number of patients in the morning obviously outnumber that in the afternoon, the expert said.

As for searches for coughing and diarrhea on Baidu, a Global Times reporter logged into Baidu's search tracing system and found no obvious changes in searches of those keywords compared with the same period in the last two years.

Tracing back the search of "cough" and "diarrhea" in the Baidu system dating back to June 2017, there was a steeper upward curve of searches of those two words in September to November 2017 and 2018 than the same period in 2019. However, the Harvard paper used only 2019 data and then jumped to the conclusion that the upward curve in autumn 2019 meant more people were contracted with the virus.

Brownstein did not reply to the Global Times as of press time.

But as soon as the Harvard paper was published, it was used as ammunition by certain Western politicians, such as US President Donald Trump, to attack China. Soon, his son, Donald Trump Jr., and Jimmy Lai Chee-ying, a key anti-government figure in Hong Kong and founder of Apple Daily, weighed in as well.

Ironically, Western media, including ABC, CNN and BBC, have been giving wide coverage of the paper without mentioning the obvious flaws.

Chinese Foreign Ministry spokesperson Hua Chunying dismissed the findings when asked to comment at a daily press briefing on Tuesday. "To derive these conclusions from phenomena such as road vehicle traffic... is preposterous," she noted.

After it was published, it was snubbed by academicians as not solid and cannot stand scrutiny.

Keith Neal, emeritus professor of the epidemiology of infectious diseases at the University of Nottingham, pointed out to the Reuters that one of the two hospitals in the study was the Children's hospital of Wuhan. But relatively few children have been hospitalized with COVID-19. "The comment that children's hospitals were affected … suggests this probably was not COVID-19," he said.

"The paper is a far cry and based on a lot of speculation and guessing,"  Bjorn Nashan, a former president of the German Organ Transplantation Society, told the Global Times, adding that those papers are published at a special time to attract attention. "It's coronavirus time, it's Harvard and the normal review process does not exist. So, a lot of ridiculous stuff was published."

"From this, we can see that US politicians and certain academicians are so short of materials to attack China with, they even used this unverified and cheesy fake paper to throw mud at China," Peng said.

Public discontent simmered over the publication, with many China's net users accusing Harvard of damaging its time-honored reputation. One net user said: "Since when have satellite pictures of vehicles and search results can be used to support for studies about viruses? I guess now we can count on the day when we consult on search engines to cure diseases for us."

"How could such a top-notch university downgrade itself and fall into the US politicians' finger-pointing game? It actually shows that everything in the US, from politicians to academicians, are engaged in this blame game."