CHINA Documentary ‘I'm Going to Xinjiang’ to premiere in March

Documentary ‘I'm Going to Xinjiang’ to premiere in March 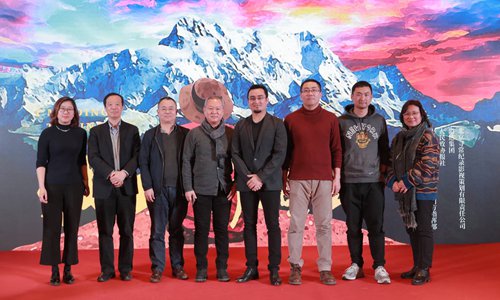 I'm Going to Xinjiang, a full-length documentary sponsored by Shanghai Jahangir Culture &Media Investment and Development Co.,Ltd is set to premiere in the capital at the Great Hall of the People in March, stakeholders at a January 12 news conference for the film at the Shanghai International Convention Center said. The documentary's chief director and general producer Uyghur photographer Kurbanjan Samat introduced the film which tells the stories of 24 people from the Xinjiang Uyghur Autonomous Region. According to Samat, the documentary took six months to shoot and is now in the post-production phase. During the filming, Yu Zhengsheng, chairman of the National Committee of the Chinese People's Political Consultative Conference (CPPCC) gave important instructions on how best to shoot the documentary. He said that great work could be done if the crew stuck to the reality in Xinjiang and focused on promoting positive energy.In addition to its planned premiere in the Great Hall of the People in March, the documentary will also be shown on many local television stations, including national broadcaster CCTV, and online video platforms like Tencent and iQiyi.