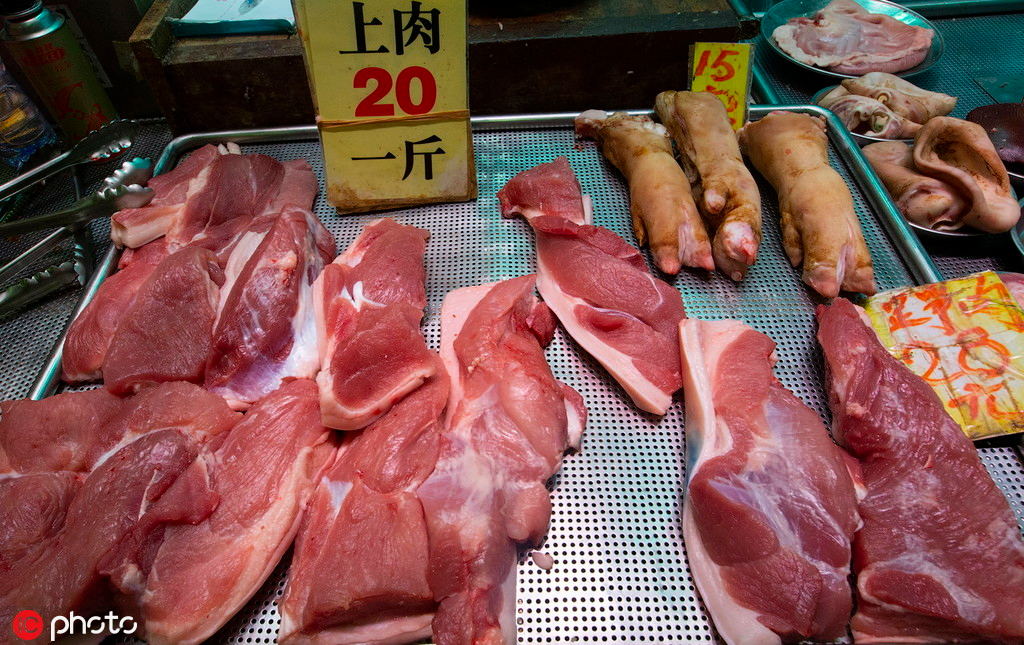 The supply of meat can satisfy domestic demand in the latter half of the year as the decrease in pork production continues due to African swine fever outbreaks, the Ministry of Agriculture and Rural Affairs said on Wednesday.

Tang Ke, chief of the market and economic information department at the ministry, said at a news conference that pork prices in China have kept rising since March, and at an accelerated pace recently.

Prices of pork will continue rising in the latter half of the year as the effect of African swine fever on the industry becomes more prominent, Tang said.

More than 140 African swine fever outbreaks have been reported in China since the first outbreak in the country was reported in Liaoning province in August. The outbreaks have resulted in the slaughter of 1.2 million hogs for prevention and control, the ministry said earlier, adding that the frequency of the outbreaks has reduced greatly this year. The illness is deadly to pigs but there has been no report that the virus could affect humans, according to the ministry.

Xin Guochang, an information monitoring official at the ministry, said despite the overall transparency of information being disclosed regarding the outbreaks, it cannot be ruled out that some farmers deliberately concealed outbreaks from authorities for various reasons.

Tang said that due to the outbreaks, the stock of female pigs for reproduction in 400 counties under its monitoring decreased by nearly 6 percent in October year-on-year, higher than the warning line of 5 percent, and the decline has been accelerating since－reaching nearly 27 percent year-on-year last month.

It takes usually 10 months between the birth of a pig and the time that it's ready to be slaughtered for the market, he said.

"Reduction in the reproduction of pigs since October has made the pork supply problem more prominent, resulting in a sustained increase in prices," he said.

However, "the supply of meat in general will be guaranteed due to increasing production of other livestock meat, … and increasing imports of pork and its products," he said.

China is the world's largest producer and consumer of pork, which accounts for more than 60 percent of the total meat production in China, according to the ministry.

Zhu Zengyong, a researcher in pork industry at the Chinese Academy of Agricultural Sciences, predicted the stock of pigs may stop declining and the number of female pigs used for reproduction will start to rebound gradually before the end of the year once there is greater control of African swine fever outbreaks.

With the decline in the supply of pork, consumption has also started to drop, partly due to the psychological effect of the virus, which has made some people reluctant to eat pork and so they turn to other meat, he said.

"The supply of alternatives to pork, such as poultry, will increase in the next two years, which will help ease the gap between the supply and demand of pork."