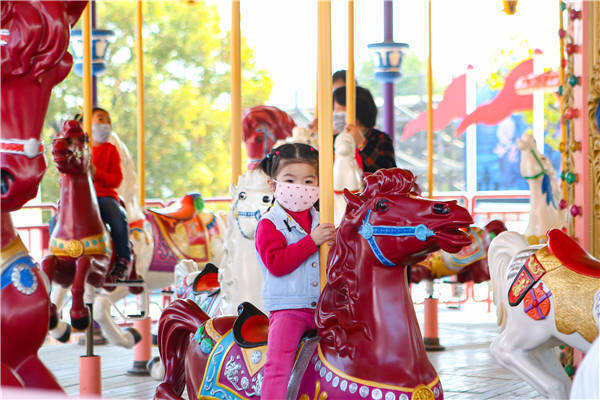 Tomb Sweeping Festival serves as the best opportunity for theme parks to see a revival in fortunes and get back on track. (Photo: China Daily)

Domestic tourism, which suffered blows amid the coronavirus outbreak, has shown signs of recovery after the Tomb Sweeping Day holiday.

Data cited from the China State Railway Group shows about 11.36 million trips were made by Chinese travelers by trains over the holiday.

Travelers expressed highest satisfaction in travel services, though total travelers and revenue saw sharp decreases because of the novel coronavirus pneumonia, according to a newly released report by the China Tourism Academy.

Domestic attractions received about 43 million visits during the holiday from Saturday to Monday, falling 61.4 percent compared with the previous year, the report said.

Among those travelers, about 53 percent went for spring outings and 33.6 percent sought out flower blossoms in parks.

Short-distance self-driven trips were the most popular type of journey among travelers during the holiday, the report said. Lvmama, an online travel agency in Shanghai, said about 83 percent of its users went for self-driving tours.

Some preferential policies and discounts on tickets and hotels also encouraged people to travel, according to the report.

Flights to cities including Beijing, Shanghai, Shenzhen in Guangdong province, Xi'an in Shaanxi province and Chengdu in Sichuan province were heavily discounted during the holiday. For example, an economy class ticket from Beijing to Shanghai was only 170 yuan on Saturday.

Tourism companies in 25 provinces and regions have gradually resumed work since mid–March, as Chinese residents who have been in quarantine and telecommuting for over two months since the Spring Festival holiday show a strong desire for travel, the report said.