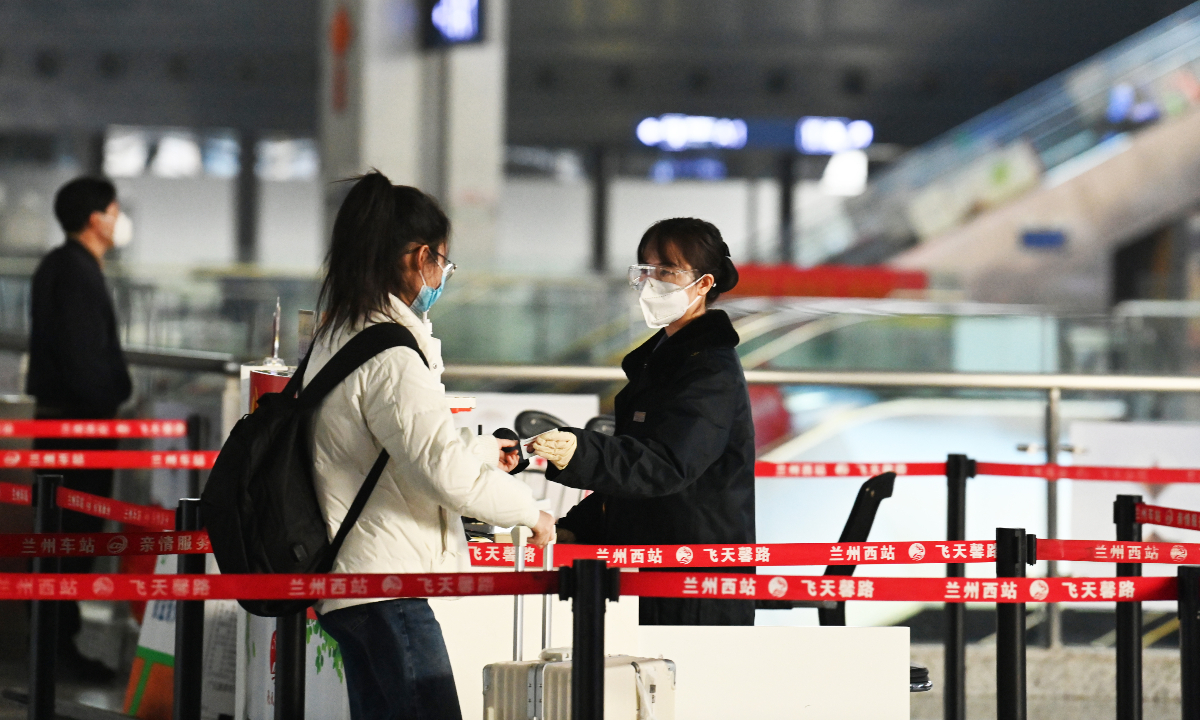 Passengers use their ID cards to enter a railway station in Lanzhou, Northwest China's Gansu Province on December 9, 2022. Starting from December 7, China Railway scrapped the previous requirement for a 48-hour negative nucleic acid result and health code for travel by train. (Photo: IC)

Domestic travel has seen an increase in demand, with tickets for trips between cities tripling on major online ticket booking platforms and some even selling out in advance of the three-day New Year holiday against the backdrop of optimized epidemic control measures in China.

The public's desire to travel has increased in anticipation of the upcoming New Year holiday, which runs from December 31 to January 2, the first extended holiday since the State Council, China’s cabinet, announced 10 new measures to optimize COVID-19 prevention and control.

Two weeks ahead of the New Year, pre-sales for train tickets, which are usually available for purchase 15 days prior to a holiday, have been quickly selling out online, the Global Times learned from several ticket booking platforms, suggesting a pick-up for the domestic travel industry.

The number of users booking train tickets for the New Year holiday has increased on a daily basis since the travel platform Qunar.com opened reservations on December 7, the company told the Global Times on Sunday.

On December 17, the number of reserved train tickets for December 31 rose by 35 percent compared with a week earlier. The popular destinations include Chengdu, Wuhan, Beijing and Zhengzhou, China Media Group reported.

The train tickets for Shenzhen to Guangzhou, Beijing to Harbin, Guangzhou to Nanning and some other short-distance routes on December 30 are sold out.

With universities across the country going on vacation early, railway departments predict that the passenger flow of students and migrants returning home will overlap, the report said. It is expected that December 31 may see a small peak of travel.

Flights and hotel rooms are also in high demand. Data from online travel platform Fliggy show that the number of air ticket bookings for New Year's Day increased by more than three times in the past week.

The number of reservations for warm-weather destinations in southern China has surged.

For example, hotel bookings for New Year’s Day in Guangdong and Hainan have tripled from the previous week, according to Fliggy.

A 38-year-old company clerk surnamed Zhang is one of the enthusiastic travelers who plans to take annual leave for a week-long trip to Yunnan Province for the holiday.

"I have just recovered from having symptoms and would like to go somewhere far away for a holiday escape," she said, adding that a cheap ticket is another important reason for her planned trip.

Another Beijing resident told the Global Times on Sunday that she is taking a short journey to Tianjin to be with her family for the New Year.

"The epidemic situation is optimized...but I will still be careful not to be infected," she said.

To make it easier for people to travel and business to resume, the central and local governments have rolled out measures to optimize epidemic control. A notice issued by the Ministry of Transport on Sunday requested speeding up the full resumption of road passenger transport services.

To create a good environment for people to travel, the report noted that non-high-risk areas shall not restrict the movements of people, while relevant regulations such as no longer checking negative nucleic acid test results and health codes for passengers should be strictly implemented.

Feng Rao, director of the Mafengwo Tourism Research Institute, told the Global Times on Sunday that policy adjustments are having a positive impact on the tourism industry, and it is foreseeable that the demand for inter-city and inter-provincial travel will rise.

After the State Council announced the New Year's Day holiday arrangement, “New Year's Day” and “New Year's Eve” related content became hot search terms, while the release of the 10 measures has driven searches of "New Year's Day Travel" up by 125 percent, according to a statement that travel service platform Mafengwo sent to the Global Times on Sunday.

The strong pre-sales for tickets before the coming holiday suggest that consumption is recovering, but experts warn that it remans too early to say if the tourism industry will experience a full recovery anytime soon.

“The epidemic has not yet subsided, and the revival of people’s confidence in domestic travel will not be achieved overnight,” Feng noted.

The recent pick-up is the result of the pent-up demand during the epidemic, but a full travel recovery will take some time, Yang Jinsong, a senior expert with the China Tourism Academy, told the Global Times on Sunday.

Due to their lingering concerns, many people may prefer to travel to neighboring places rather than distant destinations while others tend to go to less popular areas to reduce the risk of infection, Yang said.