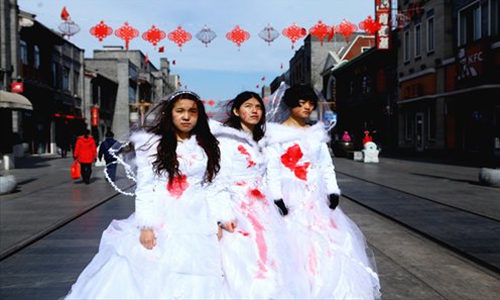 The video of a Chinese beauty blogger who suffered domestic violence at the hands of her ex-boyfriend has made waves on Chinese social media, triggering another round of discussions on how to eliminate domestic violence and protect victims.

The Public Security Bureau of Southwest China's Chongqing Municipality, where the domestic abuse took place, announced on Sina Weibo on Tuesday that the case is under investigation, and the local women's federation has also weighed in.

The 28-year-old blogger, known as Yuya on the internet, is famous for her mimic makeup of Mona Lisa and Einstein, as reported by the Daily Mail.

Yuya charged her 44-year-old ex-boyfriend of repeatedly beating and abusing her for half a year in a video she posted on Weibo on Monday. She also posted medical records.

Some surveillance footage in the video shows a man forcibly dragging a woman out of an elevator when she was sprawled on the floor and struggled to stay in.

The relevant hashtag has been viewed more than 2.3 billion times as of press time.

Chinese netizens hailed Yuya's bravery and urged severe punishment for the abuser. "Revealing his filthy behavior can help prevent others from being victims," one Weibo users said.

Yuya's ex-boyfriend, surnamed Chen, had been married several times before starting a relationship with her. One of his ex-wives confirmed in the video that their marriage ended up due to domestic violence.

"How about bringing domestic violence into the social credit system?" a netizen suggested. A bad social credit record could affect one's applications for loans or taking high-speed trains or flights.

According to statistics from the All-China Women's Federation, about 30 percent of 270 million married women have experienced domestic violence in China. Every 7.4 seconds a woman is beaten by her husband, it said.

Luo Ruixue, a member of Guangzhou-based women's rights protection group Women Awakening Network, told the Global Times on Tuesday that wide support for Yuya shows more and more people have realized that "abuse in intimate relationships is not a private thing."

Netizens pointed out that as the violence happened in a private space and victims usually lack the courage or are reluctant to speak out, relevant authorities and social organizations may not be able to offer help.

China's Anti-Domestic Violence Law, which took effect in March 2016, includes many measures, such as building temporary asylums for victims and applying for protective orders.

Yuya's ex-boyfriend was still active on Sina Weibo after the incident was exposed, but he closed the comments section of his tweets.

A screenshot uploaded by a netizen shows Chen said on WeChat that the violent incident is none of others' business. His social media post further infuriated net users.

Chen, a painter, has published at least three picture books. But no result showed up on Tuesday when searching his works on Taobao, the giant Chinese e-commerce platform.