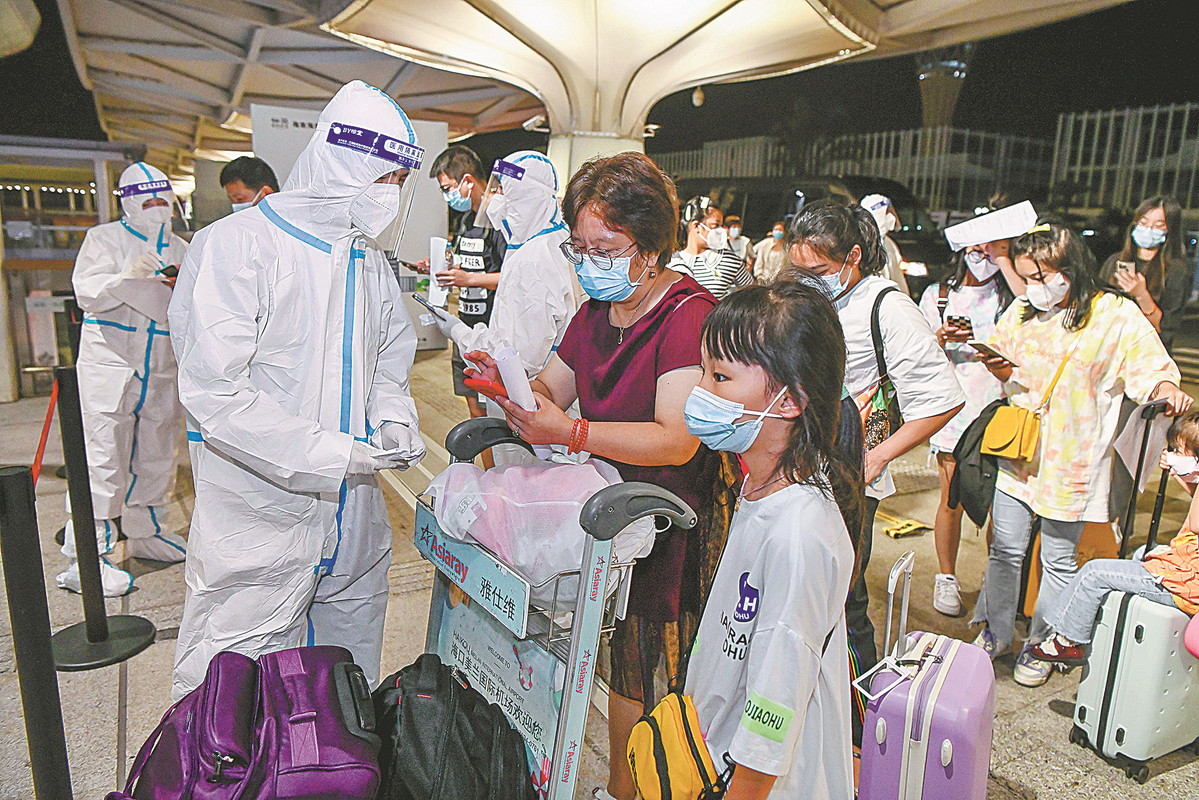 A first batch of 660 tourists stranded in Haikou, Hainan province, due to a recent outbreak of COVID-19 on the island, have their ticket information checked at Haikou Meilan International Airport on Friday before boarding flights back home. Photo/CHINA NEWS SERVICE

China's first domestically developed COVID-19 antiviral, approved by the top drug regulator last month and added to the national COVID-19 treatment protocol this week, has been shipped to regions coping with virus flare-ups, according to drug developers.

The oral drug, Azvudine, is priced at 270 yuan ($40) per bottle, containing 35 one-milligram tablets, said Genuine Biotech, which is based in Pingdingshan, Henan province.

Henan, which is battling sporadic infections, along with the island province of Hainan and the Xinjiang Uygur autonomous region which are experiencing new outbreaks were among the first to receive the drug.

Azvudine obtained emergency use authorization from the National Medical Products Administration, China's top drug regulator, on July 25, and was included in the latest COVID-19 diagnosis and treatment guideline on Aug 9.

The guideline stipulates that the drug will be used to treat adult COVID-19 patients with moderate symptoms. Each patient will take 5 mg per day and each course of treatment will last no longer than 14 days, which would cost 540 yuan at most.

The National Healthcare Security Administration also confirmed on Friday that Azvudine had been temporarily added to the national reimbursement list.

"Azvudine is the first domestic anti-COVID oral pill, and our pricing strategy has prioritized its affordability," the company told China Daily.

The company's plant in Pingdingshan, covering an area of 32,000 square meters, passed an inspection led by drug regulators in May and officially launched its operations earlier this month. The facility's annual production capacity currently stands at 1 billion tablets and is expected to reach 3 billion tablets.

"In the meantime, we have cooperated with several pharmaceutical companies, including the Beijing Union Pharmaceutical Factory, so as to meet epidemic control requirements," the company said.

The recent shipment destined for virus-hit areas was arranged by Genuine Biotech and Fosun Pharma, a Shanghai-based firm. The two companies reached a deal last month to advance the commercialization of Azvudine on the mainland, and it is likely to become available in foreign countries in the future.

Azvudine was first approved in July 2021 to treat HIV patients, and was also found to be promising in tackling COVID-19. In a late-stage clinical trial, 40.4 percent of patients showed improvements in their symptoms seven days after first receiving the drug, compared with nearly 10.9 percent in the control group, the company said in mid-July.

The drug is also safe and can clear up the virus in about five days, it said.

Chang Junbiao, vice-president of Zhengzhou University in Henan province and a leading researcher behind the drug, said that the development of small-molecule, oral pills could be "the last piece in the puzzle" in the fight against the virus, because such drugs have several advantages such as high convenience, few side effects and relatively low production costs.

Li Taisheng, an infectious disease expert at Peking Union Medical College Hospital, said that years of research on using Azvudine as an HIV drug had accelerated the launch of human trials to administer it to COVID-19 patients.

"As a new oral drug, it assists virus clearance, its toxicity is low and its price is very reasonable," he said on Friday.