The increasing number of blood stem cell donors on the Chinese mainland has given more hope to international patients with serious blood diseases, statistics from a national donor bank under the Red Cross Society of China showed.

By the end of July, the number of registered hematopoietic stem cell donors on the Chinese mainland exceeded 2.6 million with 8,680 donations completed, including 344 donations to patients overseas, according to the China Marrow Donor Program, a nonprofit organization that runs the national databank on donors. 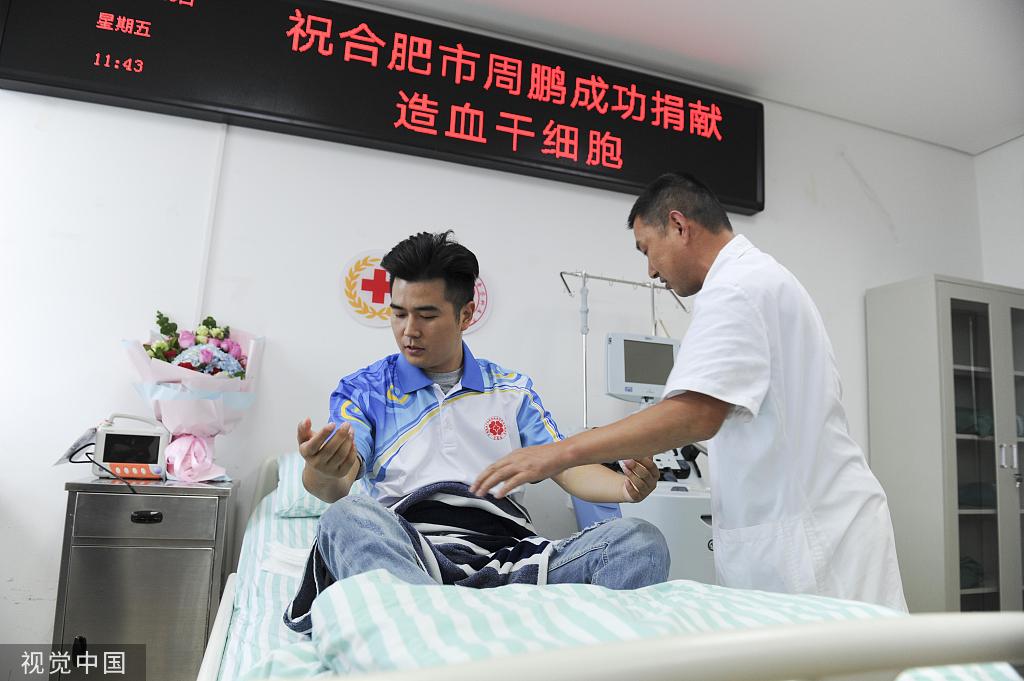 Zhou Peng, from Hefei, Anhui province, donates his hematopoietic stem cells at Anhui Provincial Hospital. The cells were used to save a 5-year-old in Beijing. (Photo: CNS)

Since 2004, when the organization made the first international donation to a patient from the United States, an increasing number of patients overseas have been saved after transplant surgeries with stem cells contributed by Chinese donors, according to the organization.

Twenty-seven international donations were made by the organization in the first seven months of this year, compared with 33 for all of last year, it said.

The 344 overseas patients who received donations come from 28 countries and regions, including the US, South Korea, Canada, Hong Kong and Taiwan, it said.

"Most of the receivers are of Chinese origin as hematopoietic stem cells from the same race are more likely to match," said an official with the donor bank who declined to be named. "But there are some Caucasian receivers who have successful matches."

In January, Li Mao, a 32-year-old policemen in Anhui province, donated hematopoietic stem cells to a blood disease patient in South Korea, making him the first donor involved in international donations in China this year.

Chances of a match are extremely low, making the expansion of donor banks and intensified international exchanges crucial, the official said.

"The demand for hematopoietic stem cells from overseas has been increasing, and we need to work harder to accelerate the expansion of the donor bank to better meet the demand from patients across the globe," she said.

Transplanting hematopoietic stem cells is an effective treatment for many serious blood diseases, such as leukemia and anemia, and some cancers.

In the past few years, government authorities, including the General Administration of Customs, have streamlined inspection and approval procedures, helping the cells get transplanted in a timely manner, according to the donor bank.

Transport authorities, including airlines such as Air China, and railway authorities have also increased support to ensure timely transport of cells, it said.

"We will intensify international cooperation in hematopoietic stem cell donation and transplantation, especially with countries and regions involved in the Belt and Road Initiative," the official said. "China boasts internationally advanced technologies in the transplantation of hematopoietic stem cells, which we hope can also benefit other countries."

In addition, the China Marrow Donor Program is considering helping other countries, such as those in Southeast Asia, to build their own national marrow banks and operate them.