CHINA Doubts prevail over debut of 'unsinkable' Titanic in 2020

Doubts prevail over debut of 'unsinkable' Titanic in 2020

A full-sized replica of the Titanic would hopefully be open to the public in 2020 despite widespread doubts since the project was launched in 2014. 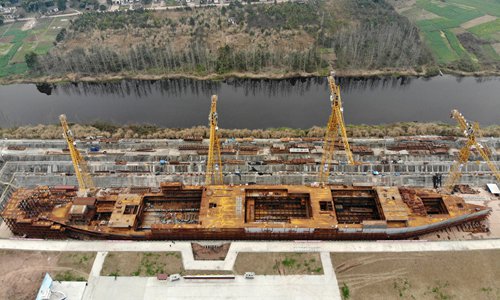 Main body of a full-sized replica of the Titanic is almost finished in Daying county, Southwest China's Sichuan Province. The project has over cost 1 billion yuan ($148 million). (Photo: IC)

The knock-off, called "the Titanic that will never sink" as it will never really set sail, is going to be part of a theme park in Daying county, Southwest China's Sichuan Province, according to the project's website.

It is located along the Qijiang River in Suining, Sichuan. Its main body will be completed in four to five months, followed by interior designing, which is likely to be completed in 2020, the Beijing Youth Daily reported Saturday, citing Su Shaojun, chairman of the Seven Star Energy Investment Group, investor of the project.

The imitation giant ship will contain features the original one had, including a banquet hall, theater, viewing deck and swimming pool.

It already cost over 1 billion yuan ($148 million), which many net users consider a waste of money. Others also said the project is unlucky, given the fact that the real ship had sunk.

Media reported that tickets for the ship would be about 200 yuan and accommodations would cost as much as 3,000 yuan a night.

But Su said the price has not been fixed.

Bernard Hill, who played Captain Edward Smith in the film "Titanic," attended a press conference for the "unsinkable" Titanic in January 2014 in Hong Kong, according to the project website.