Beijing (People's Daily) - Taiwan leader Tsai Ing-wen on Sunday gave a speech that touted “Taiwan independence” and peddled her “two states” delusion. Chinese experts on cross-Straits relations said the speech was an overt secessionist statement and cautioned against the escalation of tensions across the Taiwan Straits. 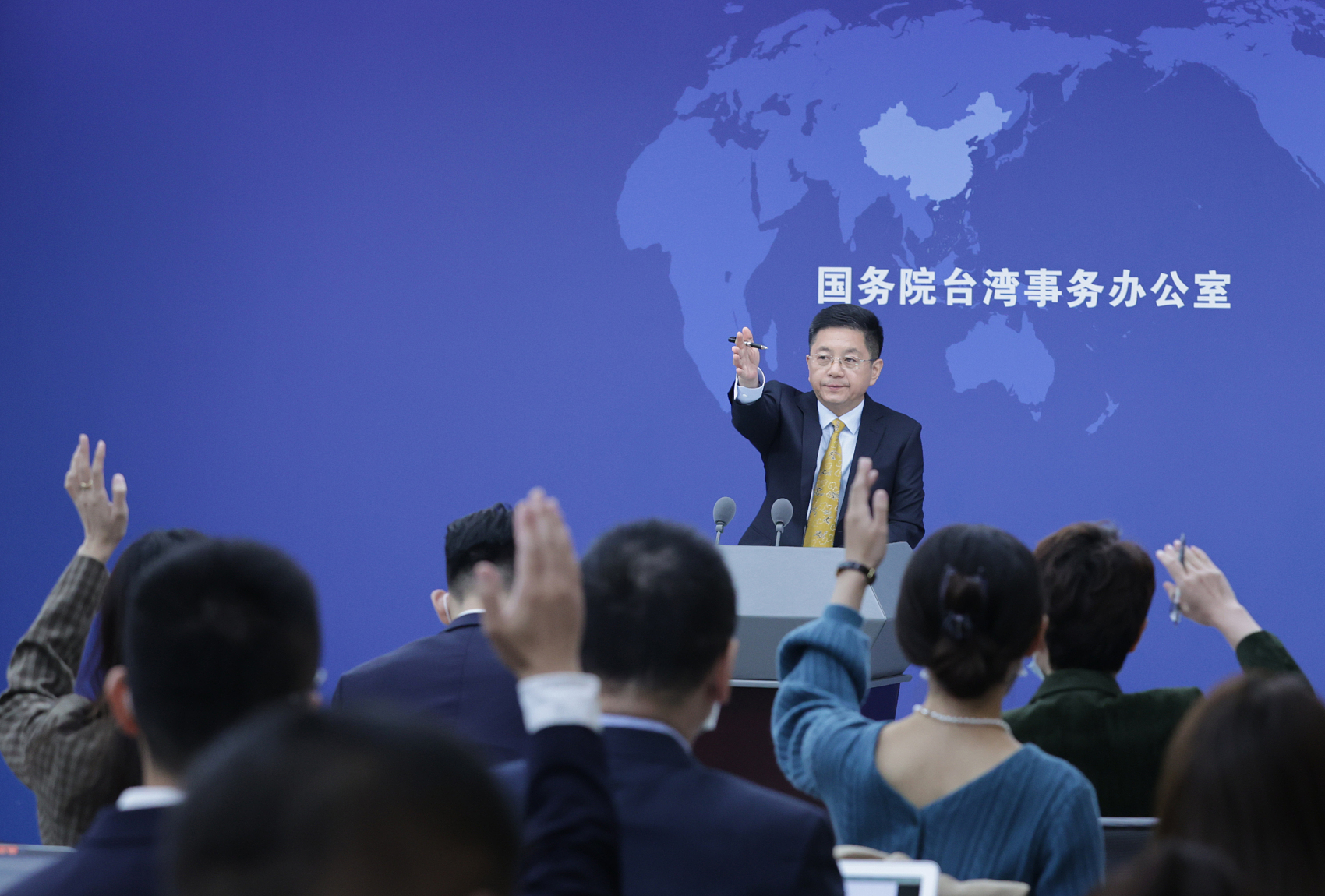 Ma Xiaoguang, spokesperson for the Taiwan Affairs Office of the State Council, gestures at a regular press conference in Beijing, capital of China, Oct. 13, 2021. (Photo: VCG)

Tsai’s recent speech, which was obviously meticulously prepared, was the most direct, hostile, confrontational, and adventurous statement on the Democratic Progressive Party (DPP) authority’s stance and policy in her term, said Yang Youyan, secretary-general of the National Society of Taiwan Studies, adding that the speech exposed the DPP authority’s nature of seeking “Taiwan independence” and its stubbornness in following a secessionist path.

The DPP authority has fallen into a governing crisis and is experiencing multiple layers of angst, Yang said, listing the DPP authority’s fear of reunification as the mainland has exhibited strength and resolve, the DPP’s fear of losing its ruling position, and its fear of being abandoned by the US.

Experts mentioned the possibility of further deterioration in cross-Straits relations given the DPP authority’s secessionist path.

Ma Xiaoguang, a spokesperson of the Taiwan Affairs Office of the State Council, said on Wednesday that compatriots on both sides of the Taiwan Straits should realize that the root cause of current tensions across the Straits is the DPP authority’s collusion with external forces and provocative acts seeking “Taiwan independence.”

The island’s people and development would suffer from a deteriorating situation, experts noted.

As an export-oriented, shallow-dish economy, Taiwan has for a long time benefited from cross-Straits cooperation to improve the region’s economic strengths and international competitiveness, said Sheng Jiuyuan, executive director of the Taiwan Studies Center at the Shanghai Academy of Social Science.

The DPP authority disregards Taiwan’s development interests and public welfare, adheres to the “Taiwan independence” route, and will eventually bring serious damage to the development of Taiwan and to the well-being of its people, Sheng said.

“If the separatists of the DPP move towards pursuing immediate ‘Taiwan independence,’ it will bring the people of Taiwan into the abyss,” said Wang Yingjin, director of the Research Center for Cross-Straits Relations of Renmin University of China.

Wang added that once the DPP authority steps on the mainland’s political red line, the mainland will surely escalate sanctions and even severely crack down on separatist acts by non-peaceful measures on the basis of the “Anti-Secession Law,” which was adopted in 2005. By then, peace and stability in the Taiwan Straits will be undermined, and the people of Taiwan will bear the brunt of the harm, he said.

Taiwan separatists believe that with US protection, the mainland will not and dare not take military strikes against the “Taiwan independence” forces, said Wang, noting that is very dangerous judgment.

Wang said Taiwan should not allow itself to become a victim of the US attempt to confront the mainland. “If there is a military conflict in the Taiwan Straits, no one believes that the US will send troops to defend Taiwan,” Wang added.

Sheng highlighted the importance of the DPP returning to the political basis of the 1992 Consensus to ease tensions. The expert also suggested the DPP take active measures to relax the restrictions on and resume the normalization of cross-Straits exchanges, and stop the policy of “de-sinicization.”

It is unrealistic to resolve the tensions in the short term, and what can be done now is to prevent an escalation and avoid the tensions turning into military conflicts, said Wang. Wang emphasized preventing the DPP’s provocative acts of seeking “Taiwan independence” and the intervention of external forces from becoming the trigger of military conflicts across the Straits.

According to Wang, this requires the resolution of two problems: First, the DPP authority continuously wanders on the edge of so-called “de jure independence” to provoke the mainland. Second, Taiwan authorities are willing to be used by the US as a “pawn” to counter the mainland.

Wang said if the DPP authority truly wants to engage in a dialogue with the mainland, they must first abandon activities seeking “Taiwan independence” to show sincerity to the mainland.