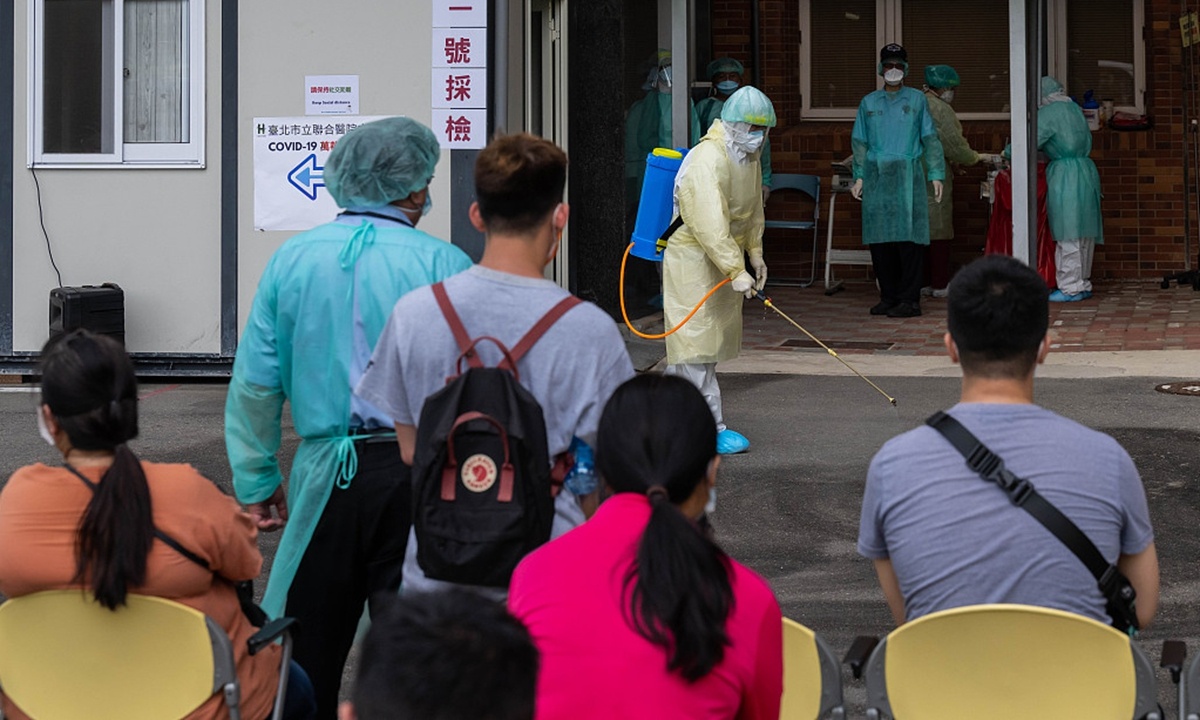 A healthcare worker sprays disinfectant on the floor at a hospital while people wait in line for nucleic acid tests in Taipei, island of Taiwan, on Monday. Photo: VCG

Despite a COVID-19 resurgence on the island of Taiwan, with more than 100 patients reported on each of four consecutive days, the pro-secessionism Democratic Progressive Party (DPP) authority has rejected kindness from the Chinese mainland, calling it "Greek gifts," which sparked controversy and discontent across the Taiwan Straits.

Tremendous public discontent is sweeping the island, due to not only a new wave of COVID-19 outbreaks but also two large-scale power outages within five days in Taiwan. Observers said that the outbreaks and power outages once again exposed the DPP authorities' disordered management and its ruling crisis, driven by political manipulation.

The island reported 245 new confirmed cases on Tuesday as of press time. Taipei and New Taipei City raised alerts and ordered schools to close from Tuesday until May 28, media reported.

Despite the DPP authority's discriminatory propaganda and hostile stance against the mainland, the mainland never shakes its stance of offering kindness based on humanitarian principles and family-style affection to Taiwan people.

As some pro-reunification political parties and organizations on the island urged the DPP to import mainland vaccines as soon as possible, Zhu Fenglian, a spokesperson of the Taiwan Affairs Office of the State Council, said on Monday that "We would like to make the greatest efforts to assist Taiwan compatriots to overcome the epidemic situation as soon as possible."

However, Taiwan's "mainland affairs council" rejected the kindness, instead calling it "Greek gifts." The DPP authority claimed that as long as the mainland does not stand in the way, "we can get more reliable vaccines from the international community more quickly."

These remarks triggered a backlash across the Straits.

Some netizens on China's Twitter-like Sina Weibo said that the DPP was "returning evil for good," and the mainland had no need to be warm-hearted. There were also rational netizens who commented that the assistance of the mainland to the island could show the major power's sense of responsibility and humanitarian concerns, which is beneficial for closer cross-Straits ties.

The controversy seemingly repeated the public disputes when China offered to assist India to fight against the epidemic, given the two sides' previous border conflicts.

Wang Jianmin, a senior cross-Straits expert at Minnan Normal University, told the Global Times on Tuesday that most mainland residents care about the safety and health of their compatriots in Taiwan, but it's also reasonable for some to be emotional, given the DPP's hostility.

Wang called on mainland netizens to understand that mainland-made vaccines will help rational compatriots, not the separatists on the island. "The mainland always takes into account the public opinions of both sides of the Taiwan Straits and properly handles issues."

Huang Chih-hsien, a TV commentator from Taiwan and expert on cross-Straits relations, told the Global Times on Tuesday that this is not the first time that the DPP has turned down vaccines that have a link with the mainland.

Some Taiwan officials reached a consensus to purchase BNT and Pfizer vaccines, but this was rejected by Taiwan's health authority only because the purchases would have been made through the general agent in the mainland, according to the observer.

Taiwan's anti-epidemic policy has been dubbed "little screening, little controls and few vaccines," as the DPP has tried to use the epidemic since the outbreak in early 2020 to serve as a means of political manipulation, and it has refused to conduct large-scale nucleic acid testing and impose strict home-quarantine policies, Huang noted.

Chang Ya-chung, a Taipei-based political scientist and member of the opposition party Kuomintang, told the Global Times on Tuesday that the DPP authorities actually are afraid of importing mainland-made vaccines, as they have smeared the vaccines as being "dangerous" and the mainland's kindness as being ill-intended.

But if the residents on the island really take the vaccines from the mainland and find them safe and effective, the DPP's propaganda hype and even its "ideological superiority" will crash.

While apparently refusing the kindness of the mainland, the DPP is eyeing vaccine assistance from the US. Hsiao Bi-khim, Taiwan's representative to the US, said Taiwan is trying to get US-certified vaccines after US President Joe Biden said the country planned to hand out 20 million doses overseas.

Pouring cold water on this wishful thinking, Chang and Huang said the DPP is in an entirely passive position as to whether it can get vaccines from the US.

"Will this 20-million-dose plan cover Taiwan? If yes, then how many doses will the US give to Taiwan?" Chang questioned.

Chang noted the news is likely to be merely a "stalling tactic" to appease the locals and stop locals from hoping to take mainland-made vaccines.

Some experts warned that the DPP could only get some vaccines by reaching a deal with the US, such as purchasing more military arms.

Taiwan's anti-epidemic policy is completely in line with its "pro-US and anti-mainland" strategy, which will only cause a long-term shortage of vaccines in Taiwan, Wang said.