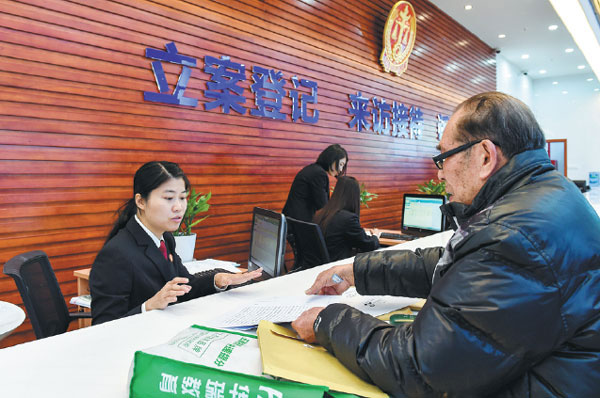 A man applies to file a case with a clerk at the First Circuit Court of the Supreme People's Court in Shenzhen, Guangdong province, on Feb 2, 2015. (Photo: Xinhua)

BEIJING, Oct. 22 (Xinhua) -- China's top legislature on Monday began the third reading of draft revisions to the organic laws of the people's courts and the people's procuratorates.

Lawmakers will deliberate the draft revisions at the bi-monthly session of the National People's Congress Standing Committee, which runs from Monday to Friday.

According to the latest drafts, the people's courts and the people's procuratorates must accept public supervision.

People's right to know, participate and supervise the work of the people's courts and the people's procuratorates shall be guaranteed, according to both drafts.

The draft revision of the organic law of the people's courts includes provisions to better explain and legislate the organization and power of judicial committees.

People's courts at all levels shall set up judicial committees, which are composed of presidents, vice presidents and other senior judges of the courts, and the number of committee members shall be odd, according to the draft.

The judicial committee of the Supreme People's Court (SPC) shall host plenary meetings to discuss and pass judicial interpretations before the SPC issues such interpretations.

The SPC judicial committee shall also host meetings of professional sub-committees to discuss and pass before SPC issued guiding cases.

The judicial committees can also discuss and decide whether to conduct a retrial on a legally effective judgment, decision or mediation ruled by the courts.

For a long time, the people's procuratorates usually set up supervision offices in prisons and detention houses to examine the execution of law.

The addition of inspection tours aims to improve work methods and effectiveness and prevent corruption and laziness during supervision work, according to Wang Songmiao, spokesperson for the Supreme People's Procuratorate.