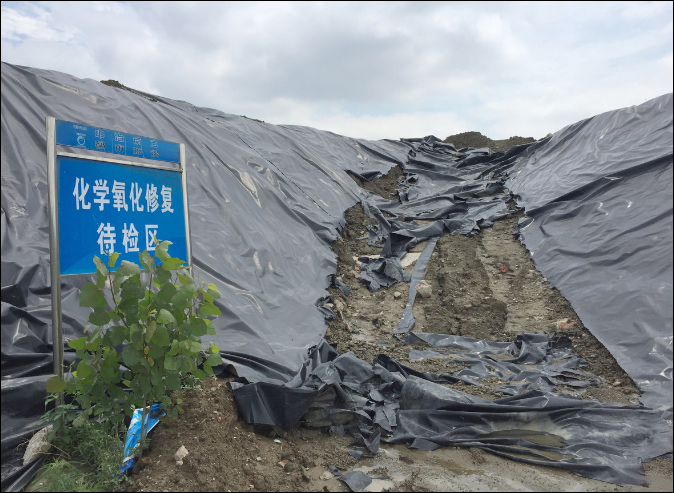 A remediation area of soil pollution in Wuhan, Hubei province on May 26, 2018. (File photo: IC)

With heavy metal pollution increasingly being curbed in agricultural areas, the country will be able to safely utilize at least 90 percent of its arable land by the end of 2020, senior environmental officials said on Friday.

More than 1,300 heavy metal-related enterprises have been shut down nationwide, and more than 900 projects to reduce discharge of the pollutants have been rolled out over the past three years, said Su Kejing, a director at the Ministry of Ecology and Environment.

"Emissions of heavy metal pollutants have been effectively curbed," Su said at a news conference.

Su said the ministry has particularly beefed up efforts to control heavy metal pollution after the State Council, the country's Cabinet, published an action plan to control soil contamination in May 2016.

In a campaign mainly targeting cadmium contamination, the ministry located about 2,000 polluting sources in its inspection of over 13,000 companies. So far, rectification work on 700 of the sources has been completed, cutting off polluters' access to arable lands, he said.

Su said a national survey on pollution in cultivated land across the country is nearly complete and shows a generally good situation.

"The current survey results show that the soil environment of the country's arable land is in generally stable condition, though some areas are still plagued by soil pollution risks," he said.

Su acknowledged that it's a pressing task to bring pollution under tight control in some affected areas. "Currently, local governments are adopting differentiated management in accordance with the survey results to enhance safe utilization," he added.

Zhong Bin, a deputy director general at the ministry, said that as national risk assessment on contaminated land continues, more than 550 plots of land around the nation have been listed as areas that need risk controls or restoration measures.

Risk control or restoration work has been accomplished on 460 of the plots, and the ministry has garnered instructive and successful experiences from about 200 pilot programs in the sector, Zhong said.

At Friday's news conference, the ministry also revealed that about 130,000 metric tons of pollutants had been found at an unauthorized dumping site on the edge of the Tengger Desert.

As of Monday, about 93 percent of the pollutants had been removed and sealed in waterproof bags, said Liu Youbin, a ministry spokesman.

"A monitoring and survey plan for underground water has been drafted, and workers are constructing wells needed for the installation of monitoring facilities to take water samples," Liu said.

The pollutants were discovered by a group of environmental volunteers as they were conducting a survey near Shapotou National Nature Reserve in Zhongwei, the Ningxia Hui autonomous region.

The pollutants came from a paper mill, which went bankrupt in 2015. The waste covered an area of about 120,000 square meters, according to China Environment News.

While urging the Zhongwei government to accelerate work on identifying the pollutants, the ministry has also required relevant authorities to hold those responsible accountable for the incident and provide information in a timely manner.

Liu said the ministry will launch a campaign to comb through the Tengger Desert and crack down on environmental violations.