CHINA Drone leads man out of 'Sea of Death'

Drone leads man out of 'Sea of Death'

A man who lost his way in a dangerous desert where men can hardly survive was saved by a drone, reported Beijing Youth Daily. 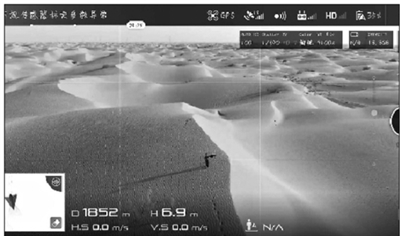 The lost man waves his coat to the drone, which located him in the Taklimakan Desert. [Photo/Beijing Youth Daily]

The man, in his 30s, was driving along a highway on the southern edge of the Taklimakan Desert in Northwest China on Sunday. The desert, the largest in China, is known as the "Sea of Death" for its extremely hostile environment.

Attracted by the beautiful desert scenery, the man got out of the car and walked into the desert to have a closer look. However, as he walked deeper into the landscape, he eventually got lost, according to the police of Qiemo county, Xinjiang Uyghur Autonomous Region.

It was around 2 pm and the temperature reached over 30 C. With no food and water, and no mobile phone signal, the man appeared to be doomed.

After he got lost, the man's friend reported it to the police. The police walked into the desert for more than 1 kilometer in search of the man, but failed to find him.

Then they deployed a drone to look for the lost man. The police said the drone was able to fly for around half an hour in one flight. To prepare for a long search, the drone carried five standby batteries.

Finally, after searching for more than one hour, the drone located the man in a place around 2 km away from the highway. Seeing the drone, the man waved his coat to it, as shown in a video clip shot by the drone camera.

A police officer said the drone was almost running out of power when it discovered the man. As the drone had no communication equipment, the police raised and lowered the device many times to signal him to stay put and wait for rescue.

The man followed the "instruction" and waited there until rescue personnel arrived to escort him out of the desert.

The police said, as the desert has no reference points, it is very dangerous for tourists to venture into it.