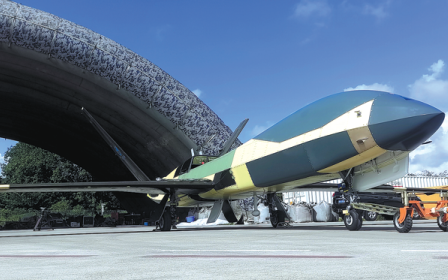 China has begun to deploy unmanned aircraft to carry out marine meteorological observation, according to Aviation Industry Corp of China, the nation's leading aircraft maker and the program's contractor.

The State-owned defense conglomerate said on Saturday that under a contract from China Meteorological Administration, it has started using a Wing Loong 10 unmanned aircraft to observe cloud cover, temperature, humidity and wind above the ocean's surface to provide data support to researchers at the administration.

The first flight took off from an airport in Hainan province and spent several hours collecting extensive data that traditional meteorological observation methods can hardly obtain, the company said in a statement. The Wing Loong 10 carried multiple meteorological instruments, such as millimeter-wave cloud radar and a Terahertz ice-cloud detector during the operation, it said.

The data has been transferred to researchers to complement the data obtained by space-, sea-and land-based platforms, the statement said.

"China has a long coastline and is often affected by marine disasters like typhoons. Though we have improved a lot in forecasting weather hazards, we still can't conduct close observations and measurement in a timely manner, due to the restrictions of our current air-based platforms," she said. "So it will be very useful for drones to make close observations of meteorological elements above the ocean surface. The data will enable us to improve the efficiency and accuracy of typhoon forecasts."

Li Liangxu, director of the observation center, said the shortage of timely meteorological data and emergency-response observation tools has been an impediment to China's marine economy and disaster-relief endeavors.

He said the center will continue working with Aviation Industry Corp of China to upgrade the drone system and develop more mission payloads.

The Wing Loong 10, previously named Yunying, or Cloud Shadow, is a high-altitude, high-speed unmanned aircraft that was placed on the market in 2016. It has several models designed for different missions, ranging from reconnaissance to airstrikes.

Aviation Industry Corp of China has built a series of civilian-purpose drones to serve emergency response, communication relay, weather forecast and other operations. This past summer, its drones played a leading role in transmitting communications to people trapped by the heavy rainfall and flooding in Henan province.