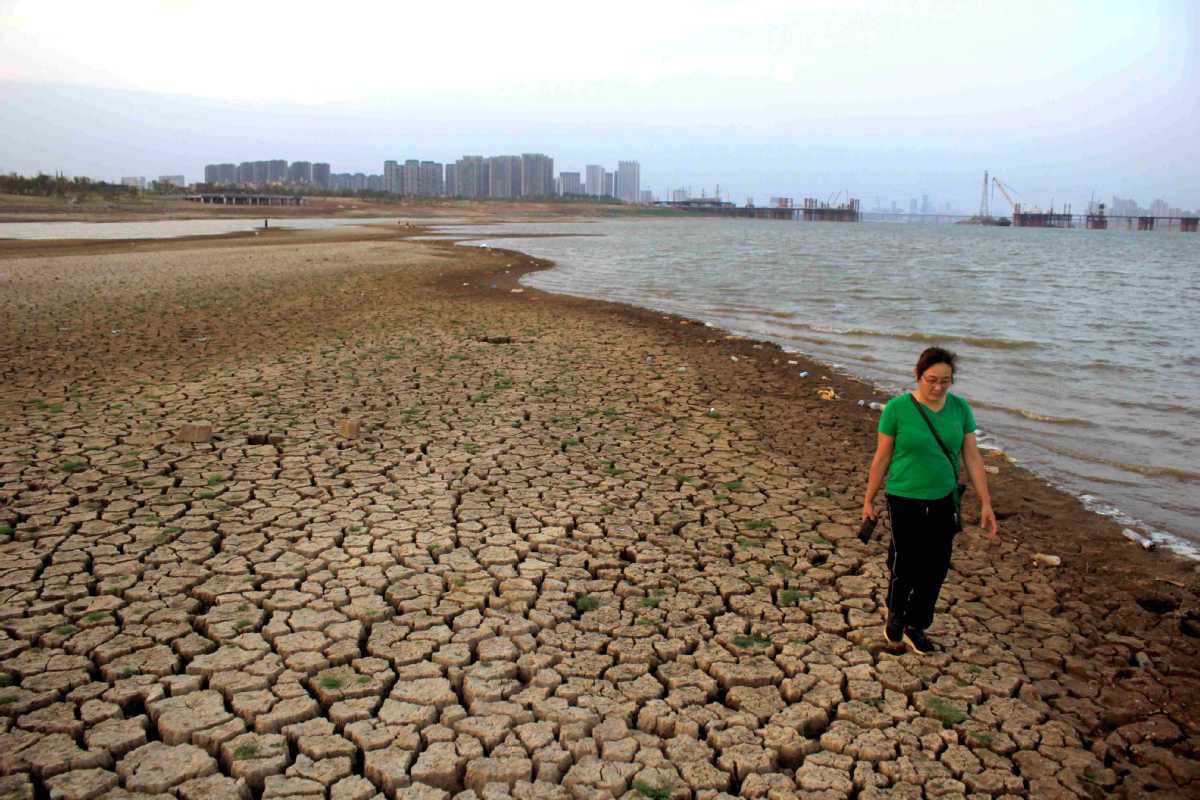 Due to the drought, cracks are seen on the bed of the Ganjiang River, which empties into Poyang Lake, in Nanchang, Jiangxi province, on Sunday. (Photo: China Daily)

Sand and dust fly up with the wind. This would be nothing strange in the desert, but the scene has been happening in the country's largest freshwater lake, Poyang, in Jiangxi province.

A recent video shot by a local resident that went viral on the internet depicts what parts of the lake look like at the moment. The lake has shrunk to only about 20 percent of its usual size. On Friday, the water level at the lake's landmark Xingzi hydrological station dropped to 7.1 meters, a record low since 1951.

Poyang provides a microcosm of the severe drought in the Yangtze River Basin since July, following lingering scorching heat waves and low precipitation.

The situation is forecast to persist, but water security in the region can still be guaranteed thanks to water stored in major reservoirs, flood control and drought relief authorities said.

Precipitation in the basin since July was almost half that in normal years, according to the Ministry of Water Resources. To date, the drought has affected almost 2 million hectares of farmland in six provincial regions along the Yangtze, including Chongqing municipality, and Hunan and Jiangxi provinces.

In an interview with Xinhua News Agency, Yao Wenguang, head of flood and drought control at the ministry, said that despite the persistent drought, water supply for drought relief in the affected areas in the basin is generally manageable.

"Water supply for large and medium-sized irrigated areas and urban areas is effectively guaranteed," he said.

On Sept 12, the ministry launched a water replenishment operation to release water from major reservoirs in the upper reaches of the Yangtze and around the two major lakes in the basin — Poyang and Dongting. The operation has so far seen a total of almost 1.9 billion cubic meters of water discharged, he said.

In a move to support the construction of emergency water supply facilities, including boreholes and water transportation equipment, 6.5 billion yuan ($910 million) in disaster relief has been allocated to drought-affected counties in the basin, he noted.

The lower reaches of the Yangtze and the regions around Poyang and Dongting are plains with high levels of groundwater. Some of the drought-plagued places in small irrigated areas and those located on the edge of large and medium-sized irrigated areas can dig wells to effectively address the shortage of irrigation water.

Forecasts show that precipitation in the lower reaches of the Yangtze will remain low in autumn.

The ministry will roll out tailored and timely adjusted water replenishment operations to cope with the situation.

In a media release on Saturday following a three-day drought control inspection to Hunan and Jiangxi headed by Vice-Minister Zhou Xuewen, the Ministry of Emergency Management depicted a gloomy situation.

"According to the forecast, there will still be no effective rainfall in the two provinces for some time to come," the ministry said, adding that local governments should take measures to ensure that drought relief responsibilities are fully assumed by all those involved.

Each township in the basin should hammer out specific drought control measures and work out emergency plans to secure water supplies for people's life and production, in accordance with the most unfavorable circumstances that may occur, it stressed.

The ministry also urged local authorities to boost the construction of drought mitigation facilities as they strive to beef up their capacities to cope with extreme weather events.