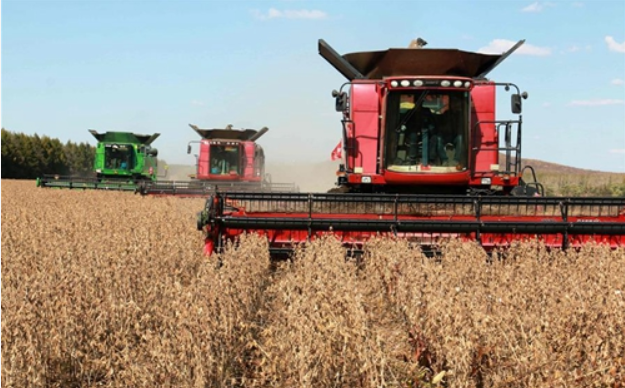 Chinese agricultural importers have moved to buy millions of tons of US soybeans following a trade truce reached between the two countries earlier this month, offering some relief to American farmers who have seen exports to China plunge during the trade war.China's purchase of 2.7 million tons of US soybeans, which is aimed at making good on its pledge, may be insufficient to address a supply glut in the US market, where prices continue to decline, Chinese analysts said. But Beijing is not to blame for the problem and Chinese imports of soybeans depend on domestic demand, they said.Two of China's largest agricultural importers - China Grain Reserves Corp and COFCO Corp - announced on Wednesday that they have bought soybeans in accordance with the consensus reached by leaders of the two countries on December 1.The companies, in separate brief statements, did not offer further details such as the amount of soybeans they bought. But citing US official data, Zhang Xiaoping, country director for China at the US Soybean Export Council, said that China might have purchased 2.7 million tons.  "China resuming imports of US soybeans is certainly a positive step and very encouraging for the US industry. But so far, the market reaction has been dull," Zhang told the Global Times.Despite the news of China's purchase, US soybean futures plunged to a two-week low on Thursday. The most active soybean futures on the Chicago Board of Trade dropped 0.4 percent at $8.96-1/2 a bushel early on Thursday morning, the lowest since November 30, Reuters reported, citing investor disappointment with Chinese demand. Zhang said that "the volume and the timing" of China's purchase has had a "limited" impact on helping to address a massive inventory of soybeans in the US resulting from a record harvest as well as a sales halt due to trade tensions.China not to blameChina's return to importing US soybeans is aimed at fulfilling its pledge under the trade truce deal to purchase US agricultural products and show its sincerity about addressing trade disputes through consultation, analysts said."They can't expect China to purchase all the US soybeans, right? They can't make such an unreasonable demand," said Chen Fengying, a research fellow at the China Institutes of Contemporary International Relations in Beijing, noting that China's imports would depend on demand.China is not to blame for the US soybean industry's supply glut, Ma Wenfeng, a senior analyst at Beijing Orient Agribusiness Consultancy, told the Global Times. "Let's not forget, their inventory pressure is caused by the trade war and the US was the one that launched the trade war, not China. China is not obliged to help the US address its self-inflicted problems."As the world's largest soybean importer, China was also a crucial market for US soybeans, importing as much as 31.7 million tons from the US in 2017, accounting for 60 percent of total US exports, according to Reuters.But after the US slapped punitive tariffs on Chinese products in July, China also imposed a 25 percent tariff on soybeans among other products, driving down imports from the US.Following the tariff, US soybean exports to China plunged 90 percent year-on-year to 130,000 tons in August and 97.66 percent year-on-year to 67,400 tons in September, according to Chinese and US official data.China meanwhile turned to countries like Brazil and Argentina for soybean imports. In the first three quarters, China imported 58.49 million tons of soybeans from Brazil, accounting for 83.55 percent of China's total imports, according to the National Bureau of Statistics.Apart from changes to import channels, Ma noted, China has also cut down on its foreign soybean reliance by cutting soybean consumption in animal feed.In October, the China Feed Industry Association lowered standards for protein content in feeds for pigs and chickens, according to Reuters. The adjustment could cut China's soybean consumption by 14 million tons a year, according to the report."China's demand for foreign soybeans will gradually decline and whether, how much or where we buy soybeans will depend on the prices in those countries," Ma said.Further imports of US soybeans could also depend on the outcome of the trade negotiations between Chinese and US officials. The Chinese Commerce Ministry on Thursday confirmed that the two sides are set to hold talks in January 2019.