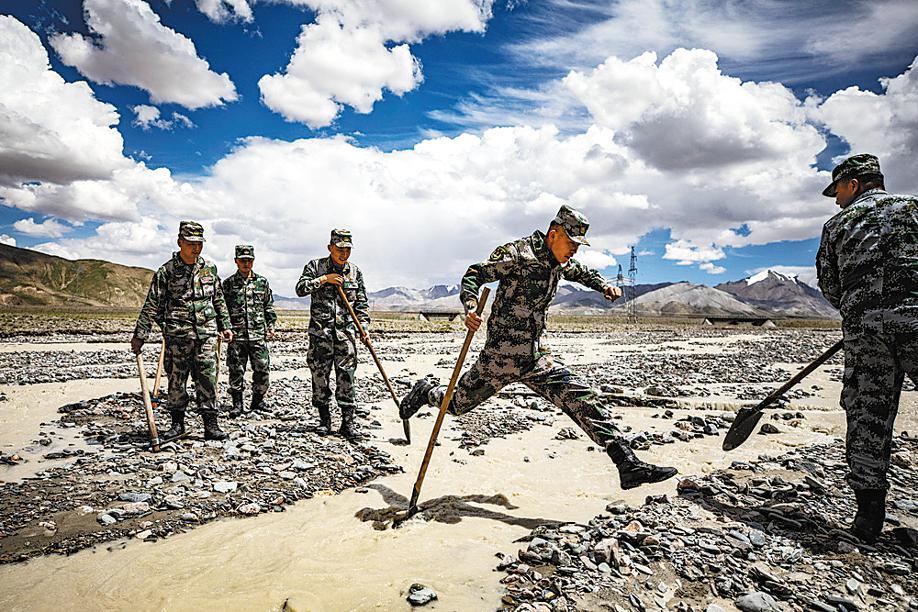 Soldiers cross a river during their regular patrol to guard a pipeline transporting refined oil from Qinghai province to the Tibet autonomous region. (Photo by Zheng Liang/For China Daily)

Against the backdrop of a crystal blue sky, scattered clouds spread across mountains covered with snow. Sometimes, an eagle flies overhead and wild mules run past. That's the kind of "boring" scene that has faced soldier Cui Xinze almost every day, and one that he has come to appreciate, for two decades at his post at a guard station near the Kunlun Mountains in Qinghai province.

Cui's mission is to guard the pipeline that transports refined oil from Golmud in Qinghai to Lhasa in the Tibet autonomous region, a vital artery that is dubbed a "lifeline" for Tibet.

The station sits at an altitude of more than 4,300 meters above sea level, where Cui faces a constant lack of oxygen. Also, he often has to endure harsh weather, such as heavy rain and snow.

His daily routine begins with a three-hour patrol to check for leaks along the pipeline, which crosses rivers and ravines in the mountainous region. If something appears abnormal, he and his team have to walk 30 kilometers to patrol the area for which they're responsible. The oxygen concentration on the plateau is just half of that on the plains.

"Although we lack oxygen, we never lack the faith and passion to guard the pipeline as soldiers," says the 39-year-old, who began his mission at the age of 19.

The world's highest pipeline, with an average altitude of more than 4,200 meters above sea level, it was built in 1972 and put into operation in 1977. Stretching 1,080 kilometers, the route crosses 108 rivers and nine mountains. 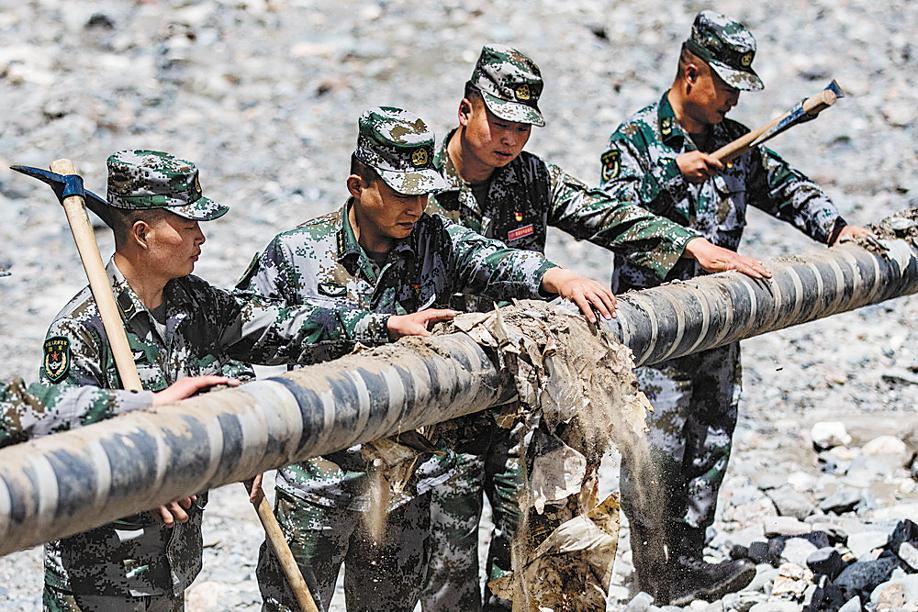 Li Mingtao, Cui's leader, says the region had no oil or electricity. Tibetans used to burn cow dung for heat and light their houses with kerosene lamps. Before the pipeline was built, oil was transported by truck, which led to a large amount of waste because trucks consumed lots of fuel.

"The pipeline has fueled Tibet's economy. That's why people call it the 'happy line'," says Li, who has guarded the pipeline for more than 20 years.

The job is more than just simply conducting a daily patrol. Sometimes when a spillage occurs, it can mean extreme danger, and it requires the guards to plug the leak and expose themselves to possible fires.

Cui recalls that in the winter of 2009, a leak happened near an electricity substation. A mistake in working to plug the leak would have resulted in an explosion. Cui volunteered to plug the leak alone. He fainted after a three-hour repair because of the shortage of oxygen and having breathed in too much noxious material from the leak.

"The doctor said that I might die. That was the first time I was at death's door," says Cui. Fortunately, Cui recovered after two months of treatment in hospital.

Many of Cui's peers call him "guardian angel" of the pipeline. In fact, lots of guards like Cui have devoted themselves to protecting the pipeline.

Apart from a lack of oxygen, they have to struggle with the bitter cold. The temperature can fall as low as-40 C in winter and they have to patrol regularly, despite the strong wind and snow.

Although it's summer, the station where Cui is based has its heating system on.

"Compared with the physical pain we have to endure, the loneliness is more painful," says Zhao Weiqiang, a soldier who has worked with Cui for 10 years.

Zhao says the life of a guard is more or less boring for young people. Day after day, they walk the same route, do the same exercise and even have the same meals, since food is not easy to transport to their station.

Except for surfing the internet in their downtime, they have very little entertainment. Now they're trying to cultivate vegetables and raise animals at their station to help alleviate the tedium. Despite the drawbacks, they still carry their sense of duty.

"To guard the pipeline is our mission and I'm proud to do it," says Zhao.