Putian, a city of 3 million residents in East China's Fujian Province, is dealing with the country's first school-centered flare-up that has seen more than 90 infections in the province in three days, though there is no trans-province contagion so far unlike the previous round concerning Nanjing, and Chinese health experts believe the latest outbreak was severe and complicated as early cluster cases involving unvaccinated students, indicating a possible rapid spread of the virus in the coming days and risk of severe cases involving elderly people living with students. 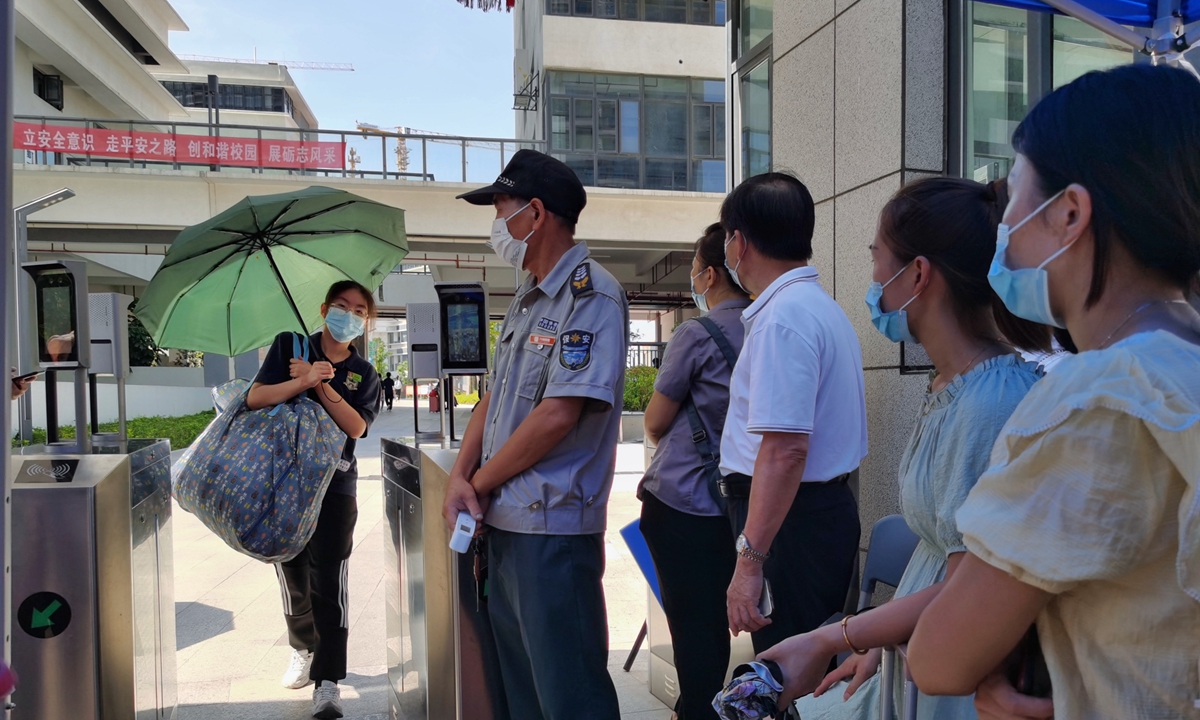 Students at a boarding school in Putian, East China's Fujian Province pack their things and leave the campus as the city on Monday suspended all in-person teaching for kindergartens, primary and middle schools due to the COVID-19 resurgence. (Photo: VCG)

Experts who called on the country to expand its vaccination program to cover children aged 3 to 12 said the Putian epidemic will unlikely be worse than the Nanjing outbreak in July and they said that the flare-up is unlikely to be tamed before the Mid-Autumn Festival (September 21), but could be put under control before the National Day holidays.

The suspected source of the outbreak is a returnee from Singapore who arrived in China on August but tested positive on September after finishing all quarantine requirements, prompting speculations on prolonged incubation and calls for longer quarantine requirement. But experts reached by Global Times noted such a long incubation is rarely seen and the outbreak may have started from other sources.

Since September 10, the infections linked to Putian's epidemic outbreak has soared to 96 in three days, 79 in Putian, 10 in Xiamen and seven in Quanzhou, as of press time.

Putian's locally-transmitted epidemic mainly has two chains of transmission - the one related to Putou Primary School and one to the Xiesheng shoe factory. The total infections from the school increased to at least 15 and 10 other infections from the factory. Xianyou county where the school and shoe factory are located started county-wide nucleic acid testing on Monday, covering more than 900,000 residents.

The local health authority linked the source of the infection to the Delta variant, which may have been caused by father of a student in the school, who recently returned to Putian from Singapore.

The city has since asked residents to stay in the city and all schools and kindergartens, excluding grade three senior high students and boarding schools, were asked to go to online classes starting Monday.

More cases from communities, schools and factories are likely to be detected and the risk of epidemic spreading to other places still exists, the visiting experts' team of the National Health Commission said on Monday.

Yang Zhanqiu, a virologist from Wuhan University, told the Global Times on Monday that early cluster cases were detected at a local elementary school where students have not received the COVID-19 vaccine, and more cases from the school will be found in the following days as the virus is likely to spread faster among those unvaccinated.

So far, around 20 cases involved children younger than 12 years old, according to the local authority.

Jin Dongyan, a professor at the School of Biomedical Sciences at the University of Hong Kong, told the Global Times on Monday that schools can easily be virus hubs, and the severity of a school outbreak in China lies in risks of more severe cases of elderly people, as most children live with their grandparents who may also be unvaccinated due to underlying health conditions.

Jin said a super-spreader probably already exists in the fresh cluster infections, and the local health authority had to identify the super-spreader to curb the spread.

Both Yang and Jin believed a prolonged incubation of Delta variant is unlikely despite some speculations, and the possible first patient could have infected after completing quarantine.

Jin also said the scale of this outbreak will be smaller than the Nanjing outbreak in July, the worst since the Wuhan outbreak, which has spread to four provinces from Northeast China's Liaoning Province to South China's Guangdong Province just three days after it was first reported, while the cases of Fujian are mostly confined in the province so far.

Under the current level II response policy, the outbreak in Putian city would be controlled around September 26, with the cumulative confirmed patients during this outbreak likely staying between 214 and 322, a research team from Lanzhou University predicted on Monday.

If the response level is lowered to level III or if there are still undetected chains of infection, the outbreak in Putian would be controlled around October 4, with confirmed cases of about 529, the research team told the Global Times. The team also said the prediction is a preliminary one and will be updated based on the progress of the outbreak.

Combating the virus for more than a year, China has formed a set of epidemic prevention and control measures with resources mobilized nationwide to help epidemic-stricken places. Affected districts and townships in Putian have been undergoing district wide nucleic acid testing, and medical staff from neighboring cities were dispatched to help in the testing, with volunteers being mobilized to provide daily necessities to the elderly and others in need, and various government departments have joined to prevent the spread of the virus.

The Fujian Communication Administration on Monday said that it launched epidemic big data immediately after the outbreak was reported on Friday, which worked day and night screening and analyzing travel records of people in the key areas and helped local health departments identify the information of people who tested positive.

Although fewer people and vehicles were seen in Putian on Monday, local residents said that the city was not locked down.

A man surnamed Zheng who runs a restaurant in Putian told the Global Times on Monday that his restaurant was closed since Sunday and communities without cases were not sealed off as he still went to his restaurant for cleaning on Monday after strict temperature checks outside the compound gate.

Many vaccination sites in Putian were temporarily closed on Monday as all medical staff were working with nucleic acid testing around the clock, and people lining up for vaccination may increase the risk of infection, an employee of the Licheng district center for disease control and prevention in Putian said on Monday.

She said that Putian has started vaccinating residents aged 12 to 17, but children aged from 3 to 11 years old were not covered. However, they would be vaccinated once they receive a notice from the local health authority.

The first school outbreak has highlighted the urgency of vaccinating students and children in China, experts said.

Yang said that Putian infections will raise the willingness of people to have their children vaccinated, and facts have proven that getting vaccinated could slow the spread of the disease.

An official at Sinopharm said that the company has finished phase II clinical trials for vaccine against the Delta variant, and they are expected to get the data, and the vaccine will be on the market by the middle of next year, China Central Television reported on Sunday.

The fresh outbreak also sounded the alarm on timely upgrading nucleic acid testing kits as nine test results of the patient were negative during his 21-day quarantine from Singapore.

Yang said that the testing kits were produced based on the genetic loci of the virus, and we cannot rule out the possibility that current testing kits cannot effectively detect the variant.

A major test kit producer who requested anonymity told the Global Times that the company was developing products based on the evolution of the virus.

Chinese genomics firm BGI Group said in a statement on Monday that it has developed testing kits that could differentiate variants, including Delta, Beta and Alpha, in two hours.