Every morning, Beilun Bridge swarms with thousands of Vietnamese commuters passing through the Dongxing border port on their way to work in China. 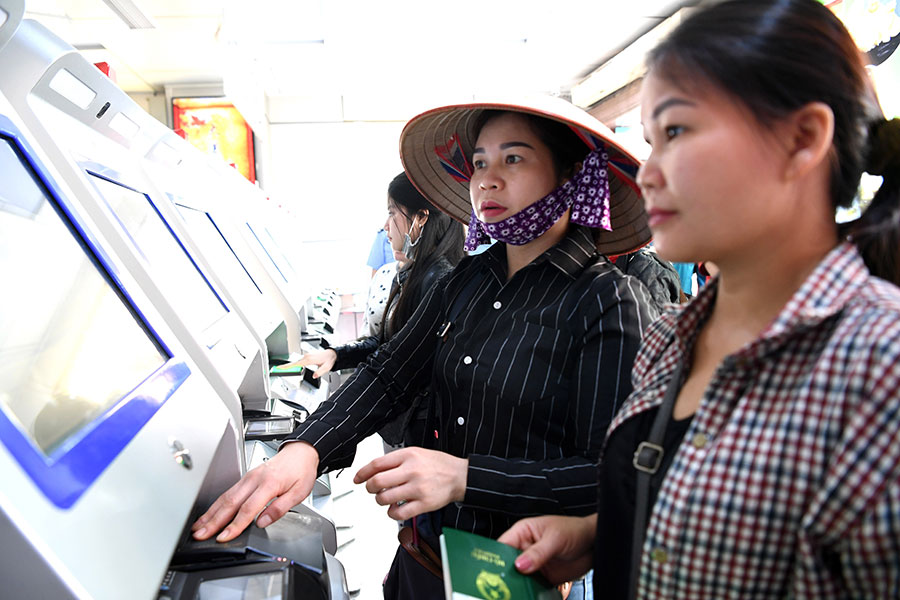 Vietnamese commuters scan their passports at the border port in Dongxing. (Photo: Xinhua)

The border bridge links the city of Dongxing in the Guangxi Zhuang autonomous region with the northern Vietnamese city of Mong Cai.

As an important border port, Dongxing provides a major trade link between China and Vietnam, as well as other members of the Association of Southeast Asian Nations.

In February 2017, a pilot project for cross-border labor cooperation was launched in Dongxing, allowing a greater number of Vietnamese to work in Guangxi.

One year after the project was launched, 20-year-old Nguyen Thi Hoai found a job as a shop assistant at a Vietnamese specialty store in Dongxing.

"After my graduation from high school, I visited here and fell in love with this place, so I decided to work here while studying Chinese," Hoai said, adding that a good command of Chinese helped her find a better-paid job.

To shorten her commute, Hoai rented an apartment in Mong Cai, which is 500 kilometers from her home in Vietnam's Yen Bai province.

More efficient border clearance has been a boon for cross-border workers.

"Twenty-six automated and four manual clearance channels were added last year, so it only takes six seconds to finish the customs clearance," said Wei An, a border officer with the inspection station in Dongxing.

Vietnamese accountant Be Thanh Tam works for a trading company in Dongxing and shuttles between China and Vietnam every day. "Working in China I can earn more than 3,000 yuan ($422) a month, 1,000 yuan higher than my salary in Vietnam," Tam said.

Some 2,200 registered Vietnamese work in the city of Fangchenggang, which administers Dongxing, according to official data.

Last year, Dongxing Port saw more than 12 million inbound and outbound tourists. In the first half of this year, there was a record high of more than 6.08 million tourists, an increase of nearly 100,000 from the same period a year earlier.

Hoai said: "I have adapted to the lifestyle of working in China and living in Vietnam."