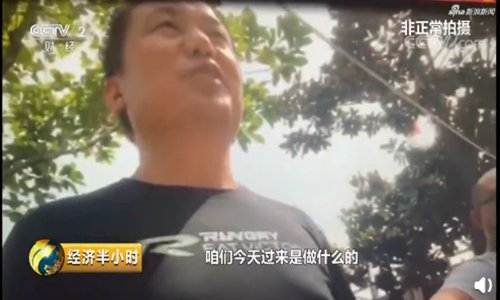 An official from the city of Zaozhuang in East China's Shandong Province whose name is not given,opens his mouth as if speaking but says nothing in front of a media camera. (Photo: Screenshot of China Central Television)

A Shandong official has drawn criticism for feigning speech to camera -- while silent -- after being asked to explain how fake crunchy cement came to be used to build a school dormitory.

The official, from the city of Zaozhuang in East China's Shandong Province, first declined to be interviewed, and when the reporter pushed, he opened his mouth as if speaking but said nothing, according to a video published by the China Central Television (CCTV) on Saturday.

The CCTV show producer told Beijing Youth Daily that they interviewed the official twice and he mimed speech for at least five minutes.

The official was loud and talkative when talking to a cement investigation team, the producer noted.

The official's name was not unveiled.

According to a press conference on Sunday, the official had been "criticized and educated."

The problematic cement was first revealed to the public in early July when a principal in Central China's Henan Province complained that 25 tons of cement from a Shandong company was of poor quality.

The cement did not dry properly and broke into pieces when thrown to the ground. The principal stopped construction after he discovered the cement was crunchy and contacted testing organizations which said the cement samples were below standard.

Samples taken on July 15 by Shandong government, part of a batch of 200 tons, were also proved to be below standard. The cement was sold to other places, according to the Sunday press conference. Two suspects from the cement company were taken into police custody.

Zhu Wei, a professor at the China University of Political Science and Law in Beijing, told the Global Times on Sunday that the official's odd behavior suggests some basic-level officials did not know how to deal with the media or address public concerns in a scandal.

It was a passive attitude to respond to public queries and no surprise sparked internet user discontent, Zhu noted.