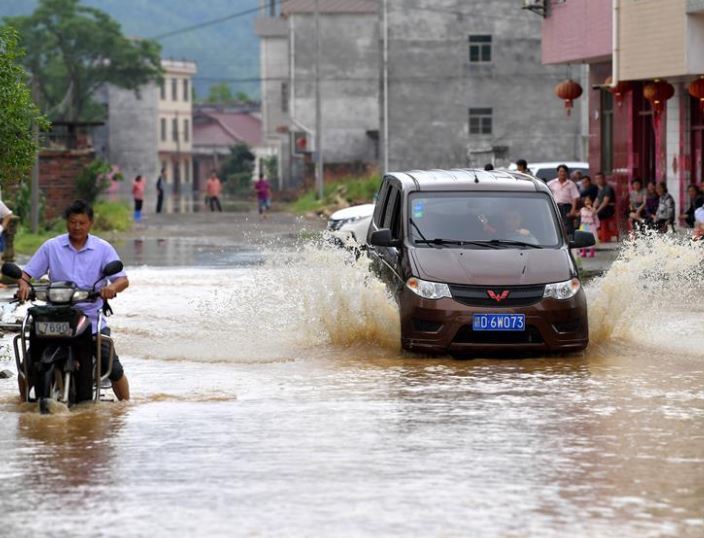 Strong rainfall has hit many places in Jiangxi recently. In the city of Guixi, the downpours caused landslides and collapsed roads, with disruptions of power, telecommunication and transportation in rural areas.

Crop-fields have been inundated. So far, the floods have affected 6,038 people in the city, with 776.4 hectares of crops damaged, leading to a direct economic loss of 31.89 million yuan ($4.6 million).

Several major rivers in Jiangxi will soon see their water levels reach warning levels, and the water level in Poyang Lake, China's largest freshwater lake, has been quite high.

Authorities have enhanced supervision to guarantee the safety of the public.

In a related development, Guizhou Province in southwest China is also bracing for rain-triggered floods, as a new round of heavy rainfall is forecast to hit a vast area in the province's central part from Friday night to Tuesday.

The Guizhou provincial flood control and drought relief headquarters activated an emergency response at 8 p.m. Friday, warning of possible flooding in cities and major rivers as well as landslides and mudslides.

Torrential rain starting Wednesday has also continued to batter the eastern province of Zhejiang. Cities including Quzhou, Jinhua, Lishui and Taizhou recorded precipitation of over 50 millimeters in 24 hours since 7 a.m. Thursday.

Data from the Zhejiang provincial hydrological administrative center showed the water levels of five major rivers in Zhejiang have risen above warning levels.

The water levels of 46 reservoirs in the province have also exceeded warning levels.

The Ministry of Water Resources on Friday warned of extreme weather during the flood season and called on local authorities to prepare for the floods.

Since the start of this year's flood season, 279 rivers in 17 provinces were struck by floods above-warning-level, 50 percent higher than that of the same period since 1998, the Office of State Flood Control and Drought Relief Headquarters said.

Forecasts showed China has entered the main flood season with more extreme weather and heavier precipitation to be expected.

Stronger typhoons and severe floods are expected to hit the middle and lower reaches of the Yangtze River, Taihu Lake, the second Songhua River and Liaohe River.

The upper reaches of the Yellow River are also likely to face floods, the forecasts said.