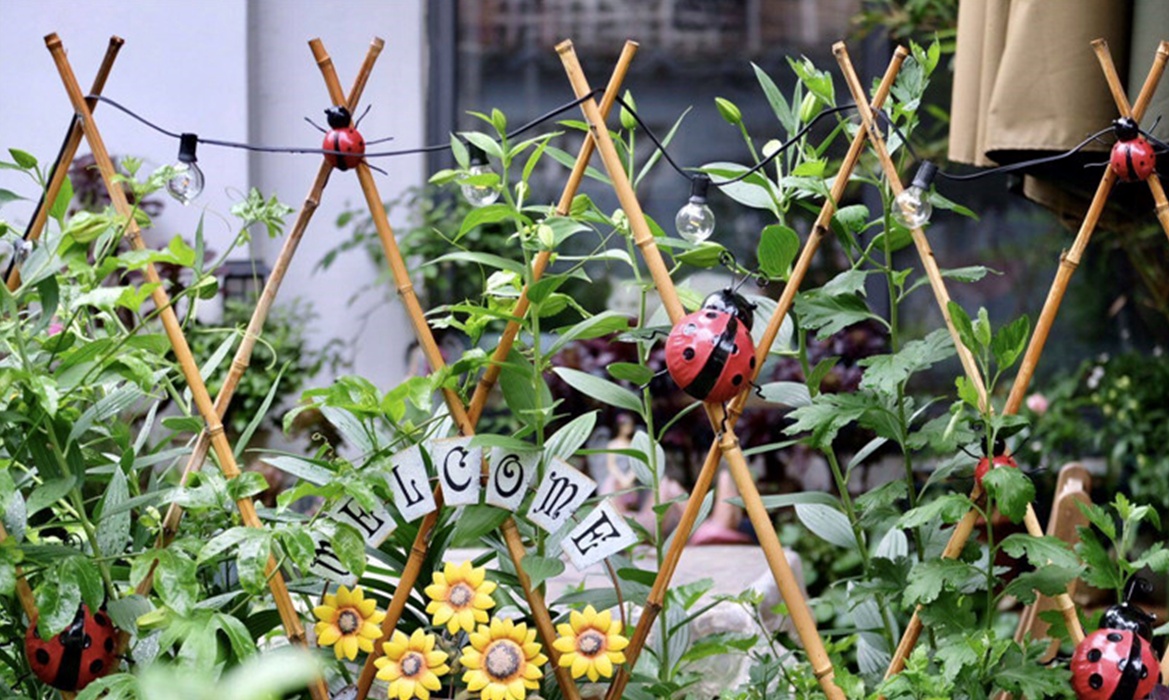 Photo shows a corner of a garden in Zijuan neighborhood, Ningbo. (Photos from http://nb.wenming.cn)

A campaign to improve urban environment was carried out in Ningbo, East China’s Zhejiang Province, in an attempt to give a “facelift” to the city’s old residential areas, by-streets and suburban areas with artistic innovation.

The campaign has brought unique views to used-to-be dead corners in the cleaning work, made living environment neat and tidy, and beautiful urban spaces.

Colorful flower beds are established; zebra crossings in front of schools are painted with colors; “shared gardens” are built by citizens along the pavilions by the streets. People tend to stop and enjoy these beautiful details of the city.

Qianlong neighborhood in the city’s Yinzhou district is now more and more popular among nearby residents after micro renovation. Even those relocated to other areas of the city went back there to take photos, saying the neighborhood has taken on a completely new look.

“Every day we get together here for chatting while appreciating the flowers after grocery shopping,” said a 78-year-old senior citizen Sun Amao in a “shared garden” of the neighborhood that was built with the potted plants contributed by local residents. Over 200 pots of flowers are placed in a well-designed setting, becoming an attraction in the community.

“We also gather here to cook black rice and make zongzi (a sticky rice ball with Chinese dates wrapped in reed or bamboo leaves), and do potluck when it comes to the Beginning of Summer and Dragon Boat Festival,” Sun introduced, adding that the garden has brought more fun to the life of the residents.

As the urban lifting campaign is being carried out, more and old residential areas and by-streets in Ningbo are revitalized.\

A trash room is transformed into a garbage sorting service station in Ningbo.

In Beijixing village of Beilun district, the bumps on the roads in residential complexes are replaced with painted “piano keys;” garbage dumps near the farm produce market neighboring the Ningbo University disappeared, and an innovative entrepreneur incubation base was established; volunteers in Tai’an neighborhood, Haishu district cleared lumbers along the Shengfeng River bank and planted flowers in recycled tires.

Starting from the trivial matters, the urban lifting campaign has planted a seed of healthy, green and environment-friendly lifestyle in the hearts of the citizens.

In Gangwuxincun village, Ningbo’s Zhenhai district, there is a trash room built in the 1980s filled with slumbers. Now the room has been transformed into a garbage sorting service station where sorting and upcycling training is offered on every weekday. “Garbage sorting is the new fashion,” said Chen Xumin who volunteers at the station. “Now our residential complex has become cleaner and warmer, and it was listed as a provincial-level demonstration complex for garbage sorting,” he added.

The campaign, joined by a great number of citizens, has stimulated the passion of them to manage their city, and sparked their enthusiasm to jointly make their home more beautiful.

A green corridor is now being constructed in Huangli neighborhood, Yinzhou district, and no one would imagine that this place was once covered by weeds and garbage. This corridor is constructed and managed by surrounding residents, and even attracted participation of many enterprises. Local railway department donated sleepers for landscape building, and a construction company offered 250,000 yuan ($35,975). Besides, employees of a security company also raised 6,666 yuan for the corridor.

“It’s not just a simple project for us, but a piece of artwork in our doorway,” said Ye Shengjiong, head of a company responsible for the project’s landscaping.