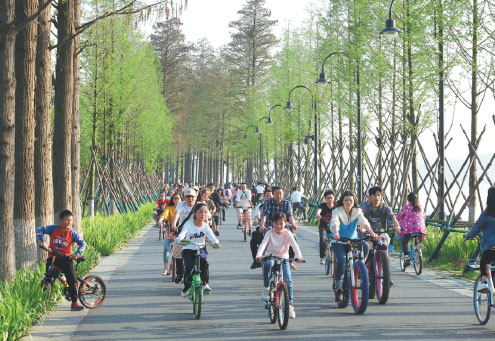 People cycle on the greenway along Donghu Lake in Wuhan, Hubei province, in April. (Photo: Chinadaily)

Donghu Lake, or East Lake, in the east of Wuhan, Hubei province, has become popular among tourists and locals alike since the completion of greenway along the lake in February this year.

The 102-kilometer greenway, with trees planted on the lakeside, connects islands, lakeside parks and nearby small ponds. The green stretch has been attracting families, marathon runners as well as elders, who would like to soak in the beauty of the place, go for walks or just limber up.

The greenway project began in 2015. "Before, the road was used mainly by cars and big trucks that made the road bumpy and dusty. Now it has entirely changed," Zhang Lan, who lived by the lake, told Xinhua News Agency.

The transformation was quick. Paved walkways, new benches and trees provided a "welcoming space" to people from all ages.

The United Nations Human Settlements Programme, or UN-Habitat, and the Wuhan Land Use and Urban Spatial Planning Research Center started the greenway project to promote urban public spaces in China. It was focused on turning the largest urban lake in China into an integrated and people-friendly green space in the center of metropolitan Wuhan.

The UN-Habitat is the UN program for human settlements and sustainable urban development.

Since then, the greenway, with a 1.5-meter-wide walking lane and 6-meter-wide cycling lane, has hosted several marathons and cycling competitions, besides drawing nearly 40 million visitors since 2016, according to the administrative committee of the Wuhan East Lake Scenic Area.

Greenways have been transforming cities across the country. The figures from the Ministry of Housing and Urban-Rural Development show that a total of 56,000 kilometers of greenway had been developed in China by the end of 2018.

Guangzhou, the capital of Guangdong province, is one of the first cities in the country to build a greenway, with an 80-km road specially designed for cycling in its Zengcheng district in 2008. Now, Guangzhou has a 3,500-km greenway network connecting 500 scenic spots in and around the city, Guangzhou's Forestry and Landscaping Bureau has said.

It said Guangdong province took the lead in building the first greenway network in China in 2010, connecting parks and nature reserves in different cities, such as Zhuhai, Zhongshan and Dongguan, in the Pearl River Delta.

Ma Xiangming, an urban planning engineer at Guangdong Urban and Rural Planning and Design Institute, said the greenways have given a big push for tourism in the Guangdong-Hong Kong-Macao Greater Bay Area, according to a report in the Southern Metropolis Daily.

"Developing greenways along the river or lake banks helps protect environment as well as serve as leisure destinations," said Ma, who participated in the planning of the greenway network in the Pearl River Delta.

In Shanghai, along the city's mother river, the Huangpu, a 45-km greenway was completed in 2018, turning the banks of the river into a long, green park.

"We wanted people to get closer to the mother river," said Zhu Xiaojun, director of the Huangpu District Greenery Management Station's planning and construction department.

Shanghai is currently working on connecting the separate stretches of greenway along the Suzhou Creek, another river that flows through the city. A part of it-in the Changning district-is expected to be completed by end of this year.

Zhao Jianrong, deputy supervisor at the Ministry of Housing and Urban-Rural Development's urban construction department, lauded the local governments in a news conference in March, saying they have played an active role in developing greenways, which helps to protect environment by changing people's lifestyles.

"Greenways provide the right environment for cycling and walking. Once people experience healthy ways of getting around, it will be easier for them to maintain a greener lifestyle," Zhao said.