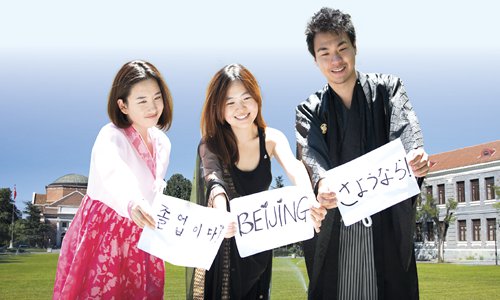 As the quality of higher education in China improves, more international students are attracted to prestigious Chinese universities. (Photo: IC)

Universities should brief international students on Chinese regulations and laws, campus discipline and safety rules, seriously punish those who violate the rules and not tolerate those suspected of committing crimes, said the Ministry of Education (MOE) in a statement on its website on Saturday.

Universities and educational administration departments at all levels are required to step up efforts to regulate the management of international students and offer education and test assessment to Chinese students with the same standard.

The ministry would establish a management system for international students. Local governments should enhance their accountability systems and crack down on illegal behavior.

China has signed deals with other countries offering scholarships to those who conduct scientific research, which has sparked skepticism in Chinese media, with some internet users complaining that foreign students are having money lavished on them.

The MOE said that funds are directly allocated to colleges and universities, most of which is spent on training and managing overseas students in China.

The statement appeared to come in response to a series of negative media reports targeting foreign students for their perceived extra benefits at Chinese colleges, which was widely picked up on social media.

In Fuzhou, East China's Fujian Province, an international student pushed a police officer who tried to stop him for illegally carrying a person on an electric scooter. The student was released only after being criticized, which many netizens considered a very light punishment. They said the punishment would have been harsher if the driver was Chinese.

The problem is "rampant," Chu Zhaohui, a research fellow at the Beijing-based National Institute of Education Sciences, told the Global Times.

Some Chinese colleges overlook the quality of international students they enroll to boost their numbers in the colleges in order to get more government funding, Chu said.

Some colleges in Beijing do not require an entrance examination for international students, he noted.

"International students can easily enter these colleges as long as they apply and register," Chu said.

As the number of overseas students increases, the MOE has already stepped up efforts to regulate their enrollment and quality.

The ministry said it punished 18 universities for irregularities in international student admissions, visa applications and on-campus management, and suspended the qualifications of 16 such institutions for accepting foreign students in 2018.

The MOE also stressed that international students should also be provided with needed assistance in their everyday life due to differences in customs and languages.

Universities should help them understand Chinese culture and get along well on campus and with society as soon as possible, as well as offering academic assistance and guidance in extracurricular activities to boost cultural exchanges and mutual understanding between Chinese and foreign students, the ministry said.

A total 63,000 international students were granted Chinese government scholarships in 2018, or 12.8 percent of all foreign students in China, according to the ministry.

In 2018, China received 492,000 international students from 196 countries and regions at 1,004 universities and research institutes, reports said.