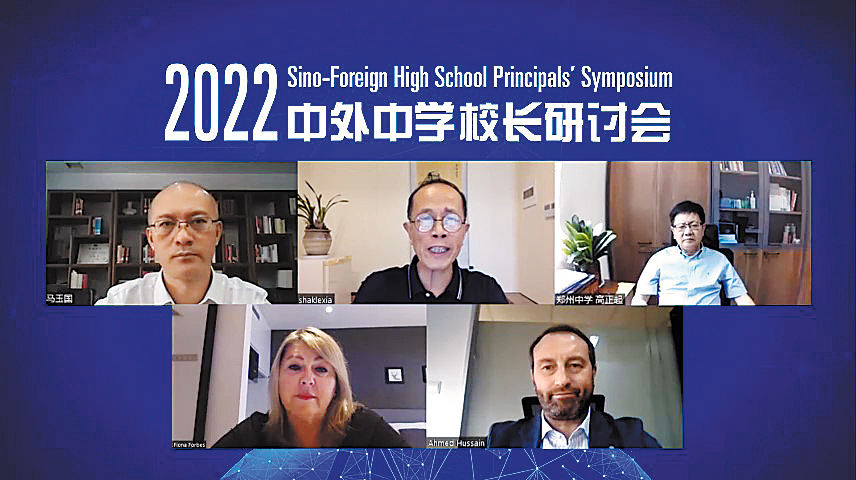 Despite COVID-19 disrupting the movement of some young people around the globe, international exchanges among them should still be strengthened and improved upon by using evermore innovative methods, educators said at a symposium on Thursday.

More than 5,000 participants, including researchers, teachers and school administrators, attended the livestreamed symposium, during which they shared their insights on international education exchanges and collaboration.

"One of the goals of today's education is to train young people with an international vision－a global competence," said Ma Yuguo, principal of The Affiliated High School of Peking University.

Education is not about competitiveness or winning everything, but an ability to understand other cultures, to resonate with people from different situations and backgrounds, and to think in others' shoes, he added.

He also noted that international exchanges should be implemented in respectful and equal terms.

"We aim at offering a high-quality curriculum and to establish a multilateral cooperation system to train outstanding young people," he said, adding that the school integrates disciplines, culture and technology to promote international exchanges and development.

The Affiliated High School of Peking University is one of the top high schools in China, known for its education reform and diverse resources.

At Dalton Academy－the school's international department, students can select courses suiting their own interests and receive tailored guidance from tutors in small classes.

Before the pandemic, students could carry out research and independent studies overseas, such as studying the natural environment in the prairies in Kenya.

However, as people's movements became restrained by the pandemic, Ma proposed to preserve and consolidate online international communication to deal with the uncertainty of the future situation.

He chose to follow two main goals－for students across the world to study together, and to develop themed international activities.

For example, the PKU-affiliated high school carried out an art-based activity with a school in Germany. Students were tasked with drawing a picture or composing a song for the partner school. Through online communication and research, the works were presented to each other. It was a way to enhance mutual understanding and appreciation, he added.

The school, established in 1997, received overseas students and sent Chinese teachers and students abroad to enhance mutual understanding before the pandemic.

In addition to going overseas for culture and heritage studies, the school also underscores the students' understanding of China's own culture through a variety of activities such as field trips to the Shaolin Temple.

"By tapping into local resources, we hope students can have a better and deeper comprehension of our own culture and be more confident with it," he said.

In April, eight Chinese government organs including the Ministry of Education released a joint guideline aimed at nurturing more high-quality teachers in basic education, while the ability to adapt to the high demand of international education exchange and cooperation is one of its key focuses.

Ahmed Hussain, chief education officer of Asia International School, who is also an associate professor at Durham University in the United Kingdom, said he saw educational exchanges not as "a physical movement of people between geographical positions", but as "the sharing of ideas, belief, knowledge, experience from people in one context, one cultural, traditional context with those from another".

One of the best practices for international exchanges in education is to "develop implementing strategy for establishing multiple bilingual schools in China", he stressed.

"We are training students with the Chinese identity, but with an awareness of culture, heritage, traditions, language beyond that of China," Hussain said.

Other participating experts agreed with the importance of international exchanges and sharing.

"I'm a firm believer in cultural and academic exchange. I think that's what makes us rich when we share in practice and when we share our understandings," said Fiona Forbes, professor at La Trobe University in Australia.

Peter Kent, president of the International Confederation of Principals, said, "We learn from one another nationally, but also we take and learn from and share the best practice internationally," he said.

He said the goal of China's international education is to serve the country's economic development and the training of innovative talent, as well as building a shared community of human beings.

Thursday's symposium came ahead of the Global English Education China Assembly, which will get underway in Hangzhou, Zhejiang province, on Friday.