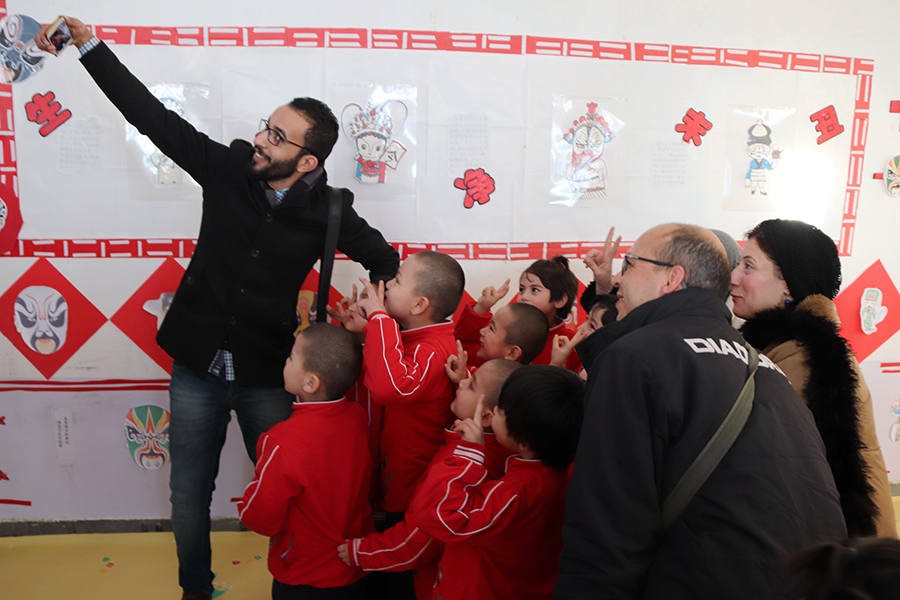 URUMQI－A media delegation from Egypt spoke highly of the stability, development and work against extremism in the Xinjiang Uygur autonomous region after visiting the area.

The delegation visited Xinjiang for a week starting on Jan 25 at the invitation of the State Council Information Office and the Chinese embassy in Egypt. After visiting and talking with residents and students at vocational training centers, the Egyptian journalists noted China's experience in effectively combating terrorism and extremism through addressing both its symptoms and root causes.

During a visit to a newly opened night market in Hotan, Adel Ali, a senior editor and researcher for Egypt's State Information Service, found that the development of tourism in Xinjiang had helped improve people's lives and reinforced social stability.

In a village of Shufu county, Egyptian group saw Rehman Abdulla making a traditional music instrument called a dutar. His sons were playing music on their own instruments.

"Through traditional music and dance, people can display their distinctive culture and share their joy with others," said Lamiaa Ramadan of Nile TV. "It is the efforts of the Chinese government that have enabled the diverse culture in Xinjiang to be passed down."

In houses of worship such as the Id Kah Mosque in Kashgar, modern facilities abound, providing water, electricity and air conditioning. Local clerics told the visitors that their religious activities had been very well protected.

After visiting the Xinjiang Islamic Institute Kamal Gaballa, a columnist for Al-Ahram newspaper, said. "The government has created a very good environment for the clerics."

In the past, southern Xinjiang was home to many impoverished people, and some residents had poor language ability and lacked the skills to find jobs, which may have contributed to terrorism and extremism. Last year, Xinjiang poured 33.4 billion yuan ($4.98 billion) into anti-poverty efforts to help people live better lives. Most of the money, more than 92 percent, was channeled to southern Xinjiang.

The group visited a garment factory in Shule county, which employs more than 200 local people, including Arizgul Nurmemet. Arizgul has been working in the factory for more than a year, and makes more than 3,000 yuan a month.

"In Egypt, farmers must go to cities to find jobs if they want to increase their income," Elwerdany said. "This factory in a rural area is a good example for us to learn from, so that farmers can get rid of poverty without leaving their hometown."

Nermin Khalil, a senior TV announcer in Egypt, bought clothes for her children at the factory. She said that the factory had truly improved local people's livelihoods.

"Poverty and ignorance are a hotbed of extreme thoughts, and if people can live good lives, extremism will certainly disappear," she said.

Xinjiang has been promoting preschool education in recent years, with modern kindergartens built in many villages in Kashgar and Hotan.

At one in Hotan, children were dancing with their teacher. The classroom has a full range of modern facilities, and the beds were clean and tidy.

"Education can shield people from the impact of extremism," said Lamiaa Ramadan.

Meanwhile, Xinjiang has provided lots of job opportunities thanks to its cross-border trade. Maher Maklad of Al-Ahram newspaper said stability was the key to continued economic growth. "That's true for any locality in the world," Maklad said.

At a center in Hotan, trainees can choose cooking, vehicle repair or hairdressing classes."I found that the training centers are completely unlike the reports of some Western media, which said they mistreated learners," said Kamal Gaballa, who visited several training centers in places such as Hotan and Kashgar.

Trainees study language and law, and learn how to treat others kindly. This great measure is an effective means to get rid of extremism. I will explain all of what I see here truthfully to the Egyptian people."

Villager Nurmemet Tursun has just finished his training at the center. Relying on the noodle-making skills he acquired there, he opened a vegetable and noodle shop. His family lives a much better life than before.

"My camera captured the smiling faces of many trainees," said Hamdi Emam, a cameraman for Nile TV. "They understand that the training is to help themselves."