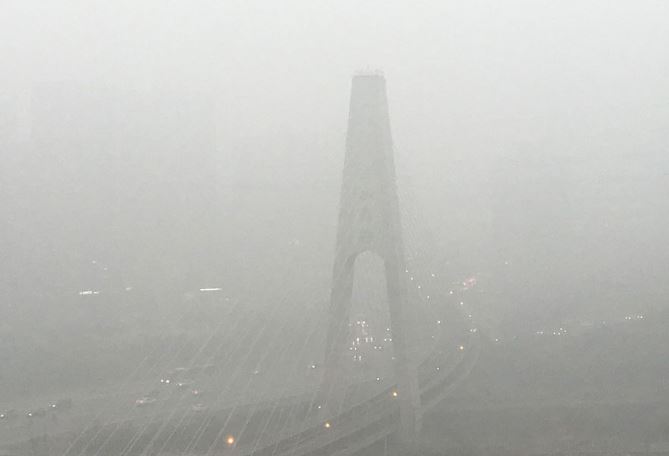 Photo taken on Nov 14, 2018, shows the area near Lishui Bridge in Beijing's Chaoyang district in the morning. (Photo: VCG)

Most forecast models predict temperatures in the Pacific Ocean will remain at El Nino levels through the remainder of 2018 and into the first quarter of 2019. The chance of a full-fledged El Nino, which is called as Super El Nino, during December to February is estimated to be about 75 percent to 80 percent, according to a report published by the World Meteorological Organization late last month.

Currently, the prediction has been endorsed by research done by many meteorological researchers at home and abroad.

The Japan Agency for Marine-Earth Science and Technology forecasted that the El Nino event, with moderate strength, will peak in February with a sea surface temperature 1.7 C above average in the central and east Pacific. The event will linger till next autumn with dwindling strength. The United Kingdom Meteorological Office gave a similar forecast, said Wu Bo, also from the Institute of Atmospheric Physics, Chinese Academy of Sciences.

According to Wu, however, the National Oceanic and Atmospheric Administration of the United States said it’s yet to conclude that an El Nino event has occurred, based on current observations,.

"Generally speaking, El Nino will pose a great effect on the occurrence of haze in North China," said Liu Yanju, an engineer from the National Climate Center.

While it's not expected this time, Super El Nino events have occurred three times in history. Observations have shown that there would be heavy smog in North China every time a super event occurred, she noted.

In such an event, an anticyclone is prone to occur in the northwestern Pacific, which could help transport water vapor and air pollutants to North China, she said.

"In the near future, as El Nino upgrades with the increase of sea surface temperature, more smog may occur in North China than in the near past," she said.

Experts also said the El Nino event will greatly reduce the frequency of cold air from north of the country, which has been playing an important role in helping disperse air pollutants in North China.

He Chao, associate professor from the Institute for Environmental and Climate Research, Jinan University in the Guangdong provincial capital, Guangzhou, said, due to limited winter precipitation, dispersing North China smog in winter depends on help from wind from north of the country. In southern parts of the country, however, the more precipitation, the less severe the smog will be during the annual cold period.