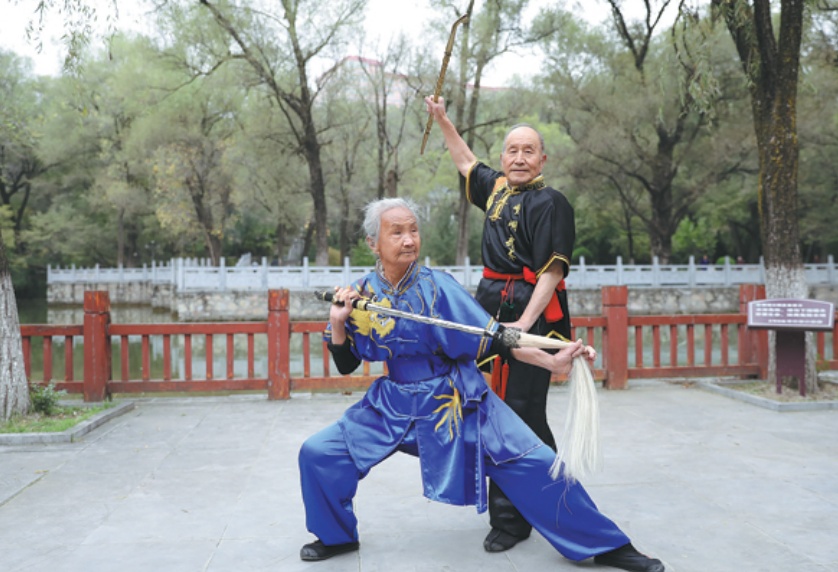 LANZHOU－Yue Qizhong stood in the setting sun and clenched a long copper smoking pipe in his hand, while his wife Zhang Weiying brandished a fly whisk at him. The two "weapons" clashed and separated at lightning speed.

Married for 63 years, the couple has practiced martial arts for more than half a century in Pingliang, Gansu province. The city is known as the birthplace of Kongtong, one of China's five traditional martial arts, and has a history stretching back 2,000 years.

Yue started training in 1962 at the age of 28, and Zhang at 25, under the guidance of the same master. They fell in love and immersed themselves in the allure of the ancient sport.

"Kongtong is famous for its fantastic weapons," Yue said."Compared with blades and sticks that people widely use in combat, martial artists in Pingliang developed a unique arsenal of weapons, including fly whisks, smoking pipes and iron fans."

Zhang said at the beginning, basic training was hard and painful. "But once you build up the physical foundation of your body, the moves and tricks are much easier to learn afterward," she said.

Kongtong became second nature and an indispensable part of the couple's lives.

They even transformed the parlor in their house into a training room, in case the weather prevented them from practicing outside.

At the entrance of their training room, dozens of weapons lean against the wall. Against a wall, gold medals and trophies are displayed in a glass cabinet, with awards piled one on top of another.

"Thanks to this lifelong habit, we have traveled to many beautiful places in China for competitions and met fabulous people. We have spent such good times together,"Yue said."Most importantly, physical exercise gives us a healthy body and positive attitude. This is truly priceless."

In recent years, the couple has concentrated more on promoting and researching the Kongtong martial art.

In 2014, they set up a training course and gave free lessons to young people. Over 200 amateurs aged between 15 and 30 signed up, generating great interest on social media.

Yue and Zhang have also set up a research team and organized regular seminars on ensuring the legacy of the martial art form."Kongtong has a history of more than 2,000 years, but sadly parts of it have already been lost. Right now it is our duty to preserve it and hand it over to the next generation," Yue said.