On May 5, Cui An, a 65-year-old coronavirus patient was lying on a hospital bed in a special isolation ward in Wuhan, once the epicenter of the coronavirus in China. Two weeks ago, doctors in Renmin Hospital of Wuhan University managed to successfully save the man at "death's door" by replacing his lungs. And today, reassuringly, without an artificial lung machine, he is on the road to recovery. 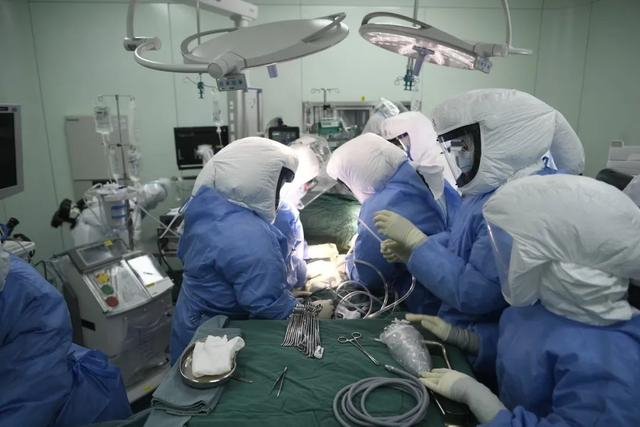 During the surgery to replace both of Cui's lungs, surgeons have to wear positive-pressure headgears in a negative pressure operating room. (Photo: youth.cn)

Cui is reportedly the first end-stage COVID-19 patient in central China's Hubei Province to receive a lung transplant for pulmonary fibrosis caused by the deadly disease. Before the surgery, the 65-year-old had been hooked up to the ECMO (extracorporeal membrane oxygenation) for life support since February 18, 2020.

The elderly started showing symptoms of a high temperature on January 23 and was diagnosed with COVID-19 on February 7. However, his condition deteriorated rapidly and he had to be intubated on February 17 at Wuhan Red Cross Hospital. Failing to maintain his blood oxygen level, the critically ill patient was then put on the ECMO artificial lung machine the next day.

After living on life support for over a month, Cui's condition continue to get worse. Almost three weeks, on March 18, he was transferred to the east branch of Renmin Hospital of Wuhan University, which was taken over at that time by West China Hospital of Sichuan University, one of the leading medical centers dealing with complicated and severe cases in China, Cui was again transferred to the intensive care on April 6.

During the treatment, although repeated nucleic acid tests (NAT) indicated that the 65-year-old patient had recovered from the virus, irreversible yet lethal damages to his lung tissue, such as pulmonary fibrosis, leading to respiratory failure, putting the elderly patient on the brink of death.

Doctors decided the only way to save his life was through a double lung transplant. On April 20, a set of the compatible vital organs provided by a donor who passed away on the same day due to brain death were flown to Wuhan from southwest China's Yunnan Province and then transplanted that evening. The life-saving surgery took place in a negative pressure operating room that could help prevent the disease from spreading, with all medics dressed in positive-pressure headgear and hazmat suits over the course of a six-hour operation.

"High risks exist when it comes to lung transplants for the end-stage COVID-19 patients," said Lin Huiqing, chief physician at thoracic surgery department of Renmin Hospital of Wuhan University and member of the national expert team of lung transplant in China, "medical workers who participated in the surgery could barely communicate with the headgear, which posed extreme challenges to their physical and psychological strength and required further teamwork and chemistry."

At around 8:00 pm, April 22, about 44 hours after the transplant, the ECMO once Cui could barely live without was removed for the first time in 62 days. What became more gratifying was that, under the meticulous care of doctors and nurses, the once critically ill elderly weathered multiple risks including transplant rejection.

On April 24, Cui was fully conscious. He was then unable to speak properly due to throat damage caused by the months-long intubation. Despite this, he was reportedly cooperating with the medics.

Starting from April 27, chest tubes once inserted into Cui's left and right pleural cavities were removed. Moreover, on May 1, the urinary catheter and peripherally inserted central catheter (PICC) were also taken off. On May 4, Cui could swallow, drink, cough and speak as well as sitting up and move his arms and legs.

According to Wang Gaohua, president of the Renmin Hospital of Wuhan University, Cui is so far the lung transplant recipient who had the world-record longest ECMO run before surgery. In order to help Cui restore his muscle strength after being bed-bound for a long period of time, a sound and thorough rehabilitation plan is underway.

The 65-year-old patient was also scheduled to resume eating by himself on May 6 and to breathe without any oxygen support, according to Li Guang, deputy professor at the department of intensive care medicine of the Renmin Hospital of Wuhan University. Li also mentioned that there could be a long way to go before Cui is completely back to normal, but the medical team would spare no efforts in helping him.