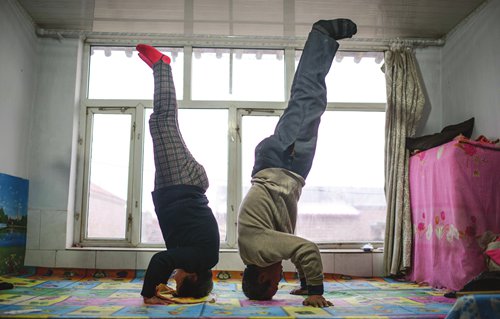 Guo, 72, and his wife stand on their heads on the hard bed. This is their practice of yoga.They are residents of Yugouliang village, home to a large population of older people, in Zhangbei county, North China's Hebei Province.Guo's wife is one of the seven people who first started practicing yoga in the small village."I did not get sick in seven years. Yoga is so good," she said.Yugouliang village is a national-level impoverished village. It has 193 households. Most of the young villagers have left to work in bigger cities, and now only 100 residents remain.A cold climate and less developed medical care once resulted in health problems for the villagers.However, a yoga storm changed the village, bringing hope to the villagers.In 2016, Lu Wenzhen, the village Party secretary, 52, was appointed as the Party chief of the village.He found that the empty-nesters in the village scratched out a living by farming. After a hard day's labor, their only entertainment was playing poker. Lu began to provide free singing lessons for elderly residents. While singing, they were also encouraged to stretch their arms and legs by imitating actions such as sweeping the yard, washing clothes, and drawing well water.However, the villagers were not interested in doing these exercises, so Lu began to introduce yoga to them.The villagers had never heard of yoga before and were embarrassed to try the new activity in public. Lu had to teach himself yoga from pictures and videos online before inviting the villagers to join him.Guo also started yoga in 2016. He is now proud that he can stand on his head, as it is difficult for many people.He said that he practiced this action by a tree while tending to cows. After half a month, he could do it easily.Now, many people in the village are doing yoga, mostly the elderly. They can stand on their heads and do splits or back bends. They walk with more energy. More than 20 villagers have grasped 60 percent of the basic poses of yoga. Several elderly people can do more difficult poses.In one year, the elderly villagers' health and spirit has improved greatly. They say that yoga has changed their lives.The village is now called "the No.1 yoga village in China". The label is also painted on the wall in the Yugouliang village in big characters.