Electoral changes get underway in HK 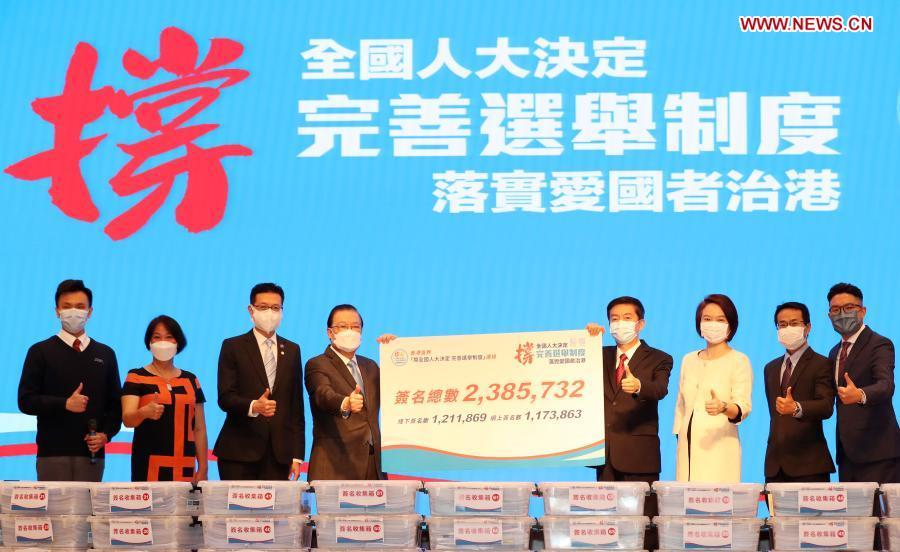 The Hong Kong Special Administrative Region government set electoral system improvement in motion on Wednesday and launched all-around campaigns to explain the changes to the city's legislature, as well as legal and business sectors, and the community.

These moves came a day after the Standing Committee of the National People's Congress adopted the amendments to Annex I and Annex II to Hong Kong's Basic Law that deal with the method of selection of its chief executive and the formation and voting procedures of the Legislative Council.

On different occasions, the electoral improvement received a groundswell of support, with representatives of various sectors saying it will lift the city out of the quagmire of internal strife and over-politicization.

Chief Executive Carrie Lam Cheng Yuet-ngor said in an open letter to the people of Hong Kong published on the front page of local newspapers on Wednesday morning, "I firmly believe that by improving the electoral system and implementing 'patriots administering Hong Kong', the excessive politicization in society and the internal rift that has torn Hong Kong apart can be effectively mitigated, thereby enhancing the governance capability of the HKSAR."

Other key government officials, including Secretary for Justice Teresa Cheng Yeuk-wah, and Secretary for Commerce and Economic Development Edward Yau Tangwah, talked with social groups. They have separately met with leading trade groups, including representatives of the legal sector and local chambers of commerce, to seek understanding and support from the industry representatives.

Fourteen legislators that made up a subcommittee on electoral improvements convened for the second time on Wednesday. At the meeting, Secretary for Constitutional and Mainland Affairs Erick Tsang Kwok-wai said the government would vigorously coordinate the implementation of the amended annexes.

Detailed bills will be introduced in the legislature for deliberation in mid-April, and the government hopes they will be passed by the end of May.

Many local residents also urged speedy implementation of the amendments by petitioning at the government's headquarters on Hong Kong Island.

Some waved banners that said, "Let patriots who care about Hong Kong and people's livelihoods run the city" and "Hong Kong will have a better tomorrow without saboteurs."

Fabrizio Goldoni, a Hong Kong-based Italian investment company manager, told China Daily he believed the improved electoral system would be an effective measure for restoring stability as well as the confidence of investors in the world financial hub.

The businessman, who has lived in the city since 1993, said the rioting in 2019 created a lot of concerns among investors and his clients.

Oriol Caudevilla, a member of the FinTech Association of Hong Kong, dismissed claims that the changes would undermine the principle of "one country, two systems".

"To me, the main mistake that most people make when talking about this principle is that they tend to realize or focus just on the 'two systems' part.... But you cannot forget the 'one country' part," he said.