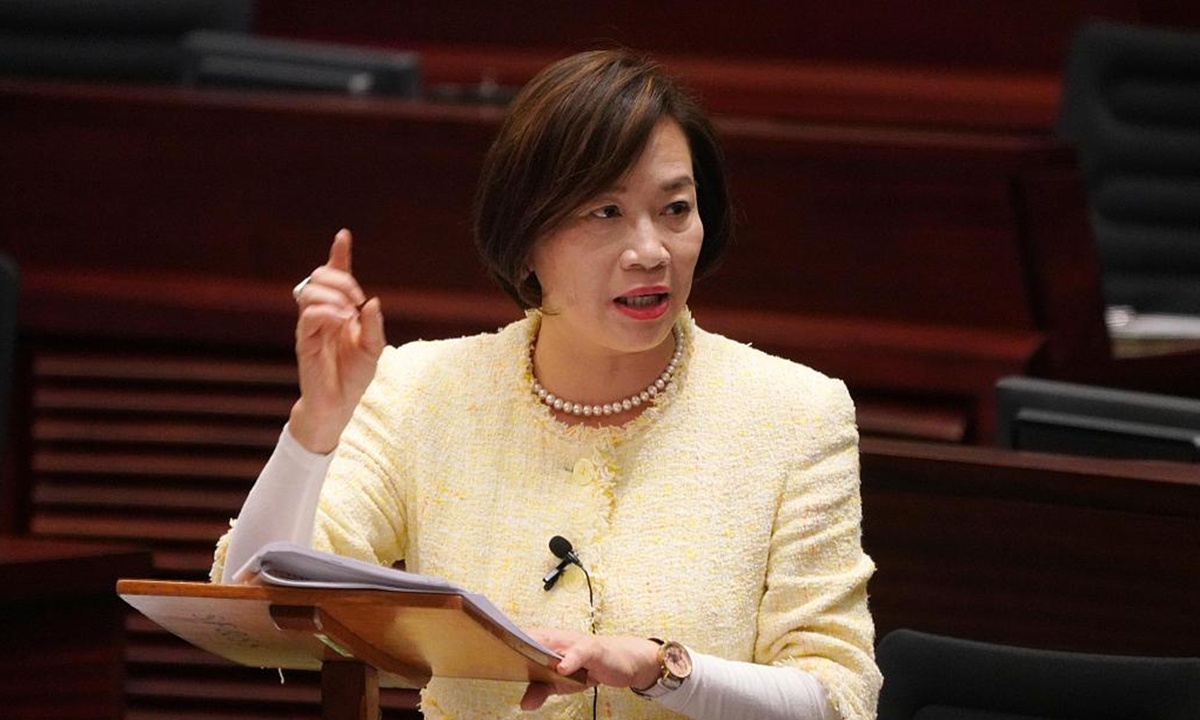 The electoral reform for Hong Kong set the tone for the city's future development for the next 25 years and more on which the central government won't take any comprises when dealing with Hong Kong affairs, Priscilla Leung Mei-fun, a member of the Basic Law Committee, told the Global Times in an exclusive interview, by referring the reform as "a mid-term surgery" for the city's political path in the past two decades.

Chinese lawmakers voted overwhelmingly on Thursday to adopt a decision on improving the electoral system of the Hong Kong Special Administrative Region (HKSAR) at the closing of the fourth session of the 13th National People's Congress (NPC), the country's top legislature, in a move to fix loopholes in the city's local governance.

Implementing the national security law for Hong Kong and now electoral reform is like having a mid-term surgery, as we're getting close to 25 years, while the baseline policy of "one country, two systems" will remain unchanged for 50 years. This surgery will help the city get better by carrying on policies better, Leung, who is also a lawmaker at the Legislative Council (LegCo), told the Global Times.

"Over the past years, the country adopted a mentality of 'maintaining the current situation and seeking compromises' in dealing with Hong Kong affairs, however, given the internal and external environments, such a mentality won't work anymore, and the central government won't compromise in governing Hong Kong," she said.

In helping Hong Kong to pursue its democratic processes, the central government has come up with decisions about the election of the fifth chief executive of Hong Kong in 2017 through universal suffrage as early as 2007, and in 2014, the top legislature defined the roadmap and timetable for this target, Zhang Yong, deputy head of the Commission for Legislative Affairs of the NPC Standing Committee, told a press conference on Friday.

"Regretfully, anti-China rioters exploited the 'five steps' mentioned in the Basic Law to veto such plans of universal suffrage, making those targets impossible to be reached," Zhang said, noting that it is pretty clear who should be responsible for impeding the city's democratic processes.

Leung said the central government had no intention to take the initiative of making the changes, hoping that Hong Kong could fix its problems by itself, "but the city failed to safeguard those bottom lines."

In any place around the world, for those in office, there's no need to make testimonies on their loyalty and allegiance to their own country, as it's such a natural thing that those who govern should be patriots, which is also undoubtable, the Hong Kong lawmaker noted. "However, in Hong Kong, with some distorted values, it's become a problem, forcing the top authority to take action and send out a warning to anti-China rioters to stop exploiting institutional loopholes," she said.

The central authority won't tolerate any anti-China rioters entering the governance system of Hong Kong and openly takes part in local policy-decision process, which is pretty clear, Zhang Xiaoming, deputy director of the Hong Kong and Macao Affairs Office of the State Council, told a press conference on Friday.

While Western media covered the Hong Kong electoral reform in a biased way by saying the central government "ended democracy" and "tightened control" by ruling out opposition parties, local lawmakers like Leung refuted such claims, as it has become clear that the reform only aims to screen out anti-China rioters and it's not a question of democracy, but a question of subversion.

In 2005 and 2015, the central government had sincerely pushed forward political reform in Hong Kong, but the opposition camp did not seize the opportunity, with no willingness to make any compromises, Leung said, noting that opposition groups turned LegCo and district councils into platforms for political battlegrounds while trying to paralyze the HKSAR government and society, even asking foreign countries to impose sanctions.

"The opposition groups should ask themselves why they got into the current situation," Leung said.

On the question of whether the ultimate goal of Hong Kong democracy — universal suffrage — is still on the table, Leung said it'll never be completely scrapped as long as the principle of patriots governing Hong Kong could be carried on effectively. "When such a basic requirement has not been met yet, how can we push forward democratic processes?" she asked.