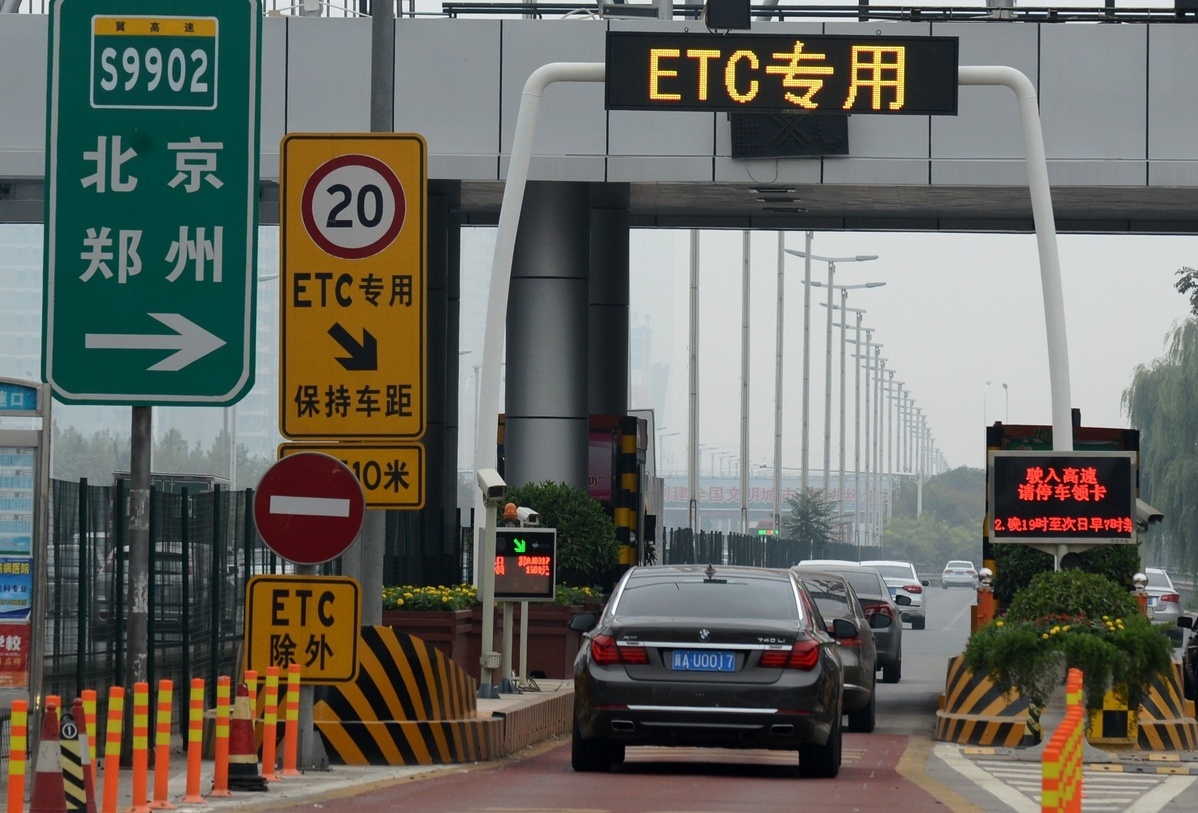 The Ministry of Transport has been taking steps to rectify defects in the newly launched national automatic payment system to ensure a faster and cheaper travel experience on the country's vast motorway network.

Since May of last year, the ministry has been sparing no effort to accelerate the adoption of electronic toll collection devices nationwide, which enable drivers to automatically pay tolls without stopping on freeways, reducing emissions and logistics costs and relieving traffic congestion.

On Jan 1, the country eliminated all 487 physical expressway toll booths on provincial borders and put the nonstop electronic toll collection system into operation on its 140,000-kilometer highway network, said Wu Chungeng, the ministry's spokesman during a news conference on Friday.

As of Jan 10 over 200 million users are signed up for the system, exceeding the ministry's goal to install at least 190 million ETC devices by the end of last year per the National Development and Reform Commission.

However, early implementation of the automatic charging devices has seen some problems, with drivers complaining about a hefty rise in toll costs and severe traffic congestion at expressway entrances.

"In the early stage of switching into the new system, drivers have come across some problems such as intensified congestion in the existing manned booths and incorrect toll costs," he said, adding the ministry has strengthened monitoring of massive traffic jams and reviewed toll fees to guarantee a smooth and satisfactory travel experience.

Wu Dejin, director of the ministry's highway department, said a few drivers might run into higher toll fees as calculations are now made based on vehicle type for trucks and distance for passenger cars.

Trucks on toll roads are now charged according to number of axles instead of by weight, as was done in the past. When the trucks are fully loaded, the new rules will bring a minimum 10 percent discount compared to the previous one, he said. He added that drivers operating empty trucks, who paid less under the old system, are now faced with an increased cost.

Wu Dejin also noted it's the same when it comes to some passenger vehicle drivers who used to pay toll fees based on the shortest route between two manned booths. With the current rules based on actual driving distance, drivers who chose a longer route have to fork over extra money.

Li Aimin, deputy dean of Research Institute of Highway, said: "The changes in the toll charging standard have reduced overall logistics costs for the majority of drivers, and are aimed to help optimize public transportation resources and reduce traffic congestion on the highway."

The accurate and time-saving calculation can be realized due to electronic toll collection gantries at entrances and exits, as well as multiple locations along the road. Each time a vehicle passes through a gantry, the system will charge accordingly but give only one total bill to the drivers after leaving the highway.

The sectional fare mechanism, coupled with contemporary technical problems in the system, however, led to some drivers' phones buzzing during their entire trip with payment notices for every road section, which made them confused about total costs.

The ministry has been working on technical improvements to the ETC system to ensure its stability, and will make drivers well aware of the toll fees, Wu said.

According to the ministry, a passenger vehicle with an ETC device only takes 2 seconds to pass through a toll booth, compared with 14 seconds for a manned booth. And it takes just 3 seconds for a truck, 26 seconds less than traditional means.

Wu Chungeng said the ministry has also stepped up efforts to reduce traffic congestion at manned toll booths for drivers who haven't installed the devices.

"Together with the provincial transport authorities and toll stations across the country, we have established a 24-hour monitoring mechanism. After spotting traffic congestion stretching over 500 meters, local authorities will take immediate measures to ease the gridlock," he added.