A herd of wild Asian elephants that has wandered Southwest China's Yunnan province for more than 17 months appears to be heading home to its traditional habitat in Xishuangbanna National Nature Reserve. 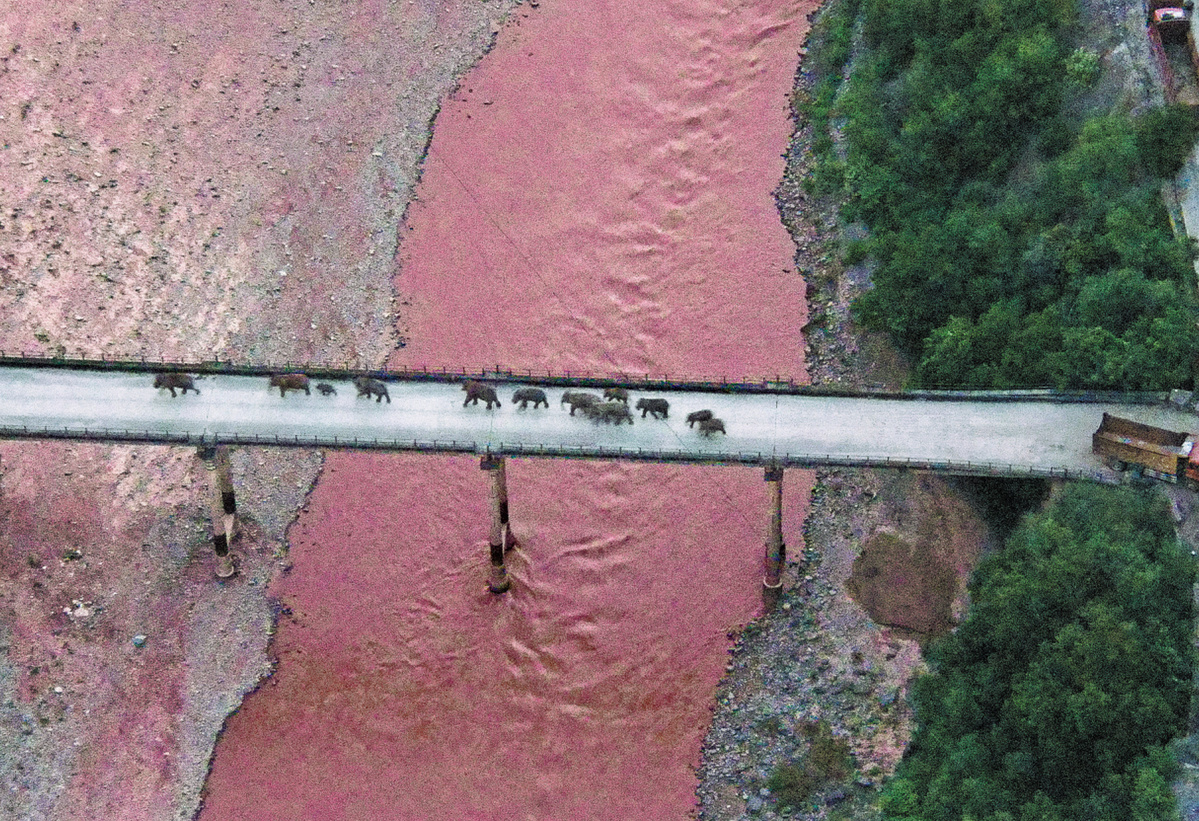 A herd of wild Asian elephants crosses the Yuanjiang River in Yuanjiang county, Yunnan province, on Sunday. The herd, which has been wandering for about 17 months, is now safely on its way back to a nature reserve in Yunnan province, according to the National Forestry and Grassland Administration. YUNNAN FOREST FIRE BRIGADE

At 8 pm on Sunday, the herd was guided across a bridge over the Yuanjiang River, said Wan Yong, head of the Yunnan Forestry and Grassland Administration and also director of the management and control headquarters in charge of protecting the roaming elephants.

The elephants were on Monday approximately 26 kilometers from Mojiang county, Pu'er city, one of their major habitats in Yunnan along with Xishuangbanna Dai autonomous prefecture.

"The elephants are monitored and kept away from residential areas. The herd's condition is stable and we will continue to guide them back to their habitat and guarantee both the safety of the elephants and local residents," Wan said.

Before the herd arrived at the Yuanjiang River, forestry experts spent days scoping 80 km of the riverbank before they chose a bridge on the 213 national highway for the elephants to cross.

The herd of 14 elephants, ranging in age and size, has traveled more than 500 km.

Sixteen elephants departed Xishuangbanna, but three of them dropped out of the trek and two calves were born en route. In July, a bull elephant that had broken away from the herd was sedated and returned to the nature reserve.

Heading north, the herd passed through Pu'er, Honghe and Yuxi. In June, they reached the outskirts of Kunming, the provincial capital, which has 8 million residents.

Local authorities deployed trucks, workers and drones to monitor the elephants 24 hours a day, evacuated roads for them to pass safely and lured them away from populated areas with food.

More than 180 metric tons of food, including pineapples and corn, has been fed to the herd, Wan said. Even as they encroached on communities, none of the elephants or people were injured.

In recent months, real-time monitoring has provided researchers with rare opportunities to study the herd.

"They can identify the direction of food and water resources very precisely. And they also showed great performances in solidarity and group decision-making. Their division of work is impressive, too," said Chen Fei, director of the Asian Elephant Research Center under the National Forestry and Grassland Administration.

The Asian elephant, which is included on the International Union for Conservation of Nature's Red List of Threatened Species as "endangered", enjoys the top level of protection in China. Yunnan is its sole habitat in China.

At a news conference on Monday night, Shen Qingzhong, a senior official from the Xishuangbanna reserve, said it's likely that the elephants will head north again.

"Historically, Asian elephants used to live in many parts of the country. Migration is in their nature. It helps the species expand its territory and have more chances to improve their gene pool by mating with different groups," Shen said.

The forestry department and the provincial government plan to develop a national park, which aims to provide habitat protection for the elephants and a balanced relationship with residents.