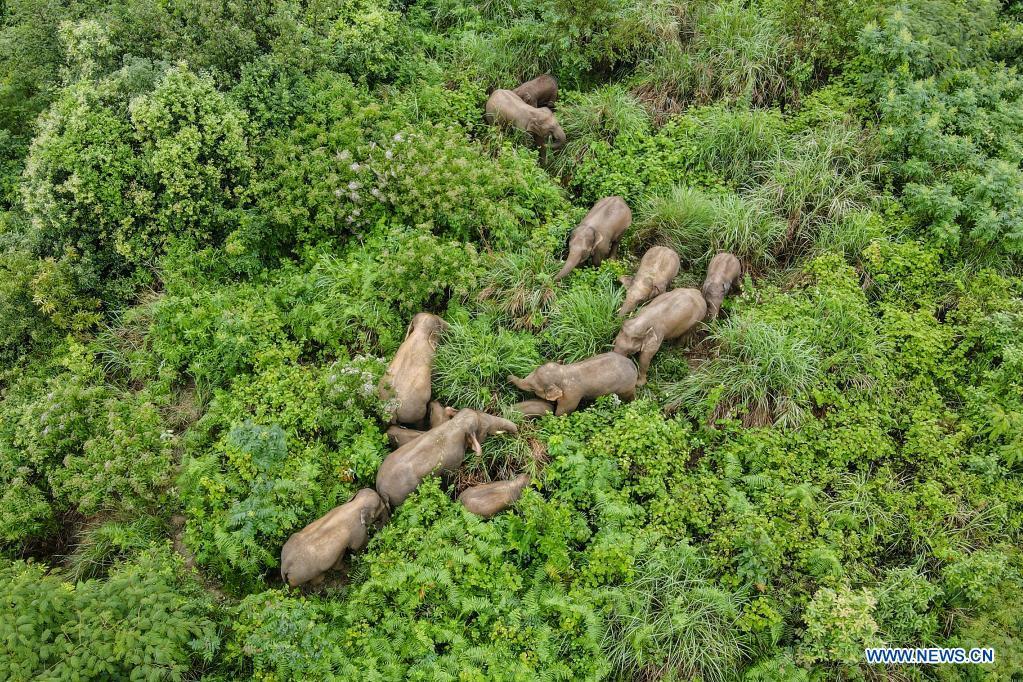 The herd of 14 wild Asian elephants roaming around in southwestern China's Yunnan province successfully went through the last natural barrier on its way home and returned to its traditional habitat in Pu'er city on Friday.

At 1 am, the elephants, which had left their habitat in Xishuangbanna National Nature Reserve, crossed the Babian River and entered Ning'er county in Pu'er city, one of the three major habitats of Asian elephants in Yunnan.

The northbound trip, lasting about 18 months, finally ended without any harm to either the elephants or local residents, the provincial headquarters in charge of protecting the herd announced on Friday.

The headquarters has withdrawn the provincial surveillance group and passed the monitoring work to city and county-level forestry departments.

The herd departed from its traditional habitat in Xishuangbanna Dai autonomous prefecture last year and started traveling north in April.

It passed through eight counties in the province during the journey. In June, it eventually reached the outskirts of Kunming, the provincial capital, which has about 8 million residents.

The herd started its journey with 16 members, but three of them dropped out, while two calves were born en route. In June, a bull elephant broke away from the group and wandered off on his own.

In July, the bull elephant was sedated with a tranquilizer dart, lifted into a cage on the back of a truck and returned to Xishuangbanna.

To safeguard their journey, local authorities deployed trucks, workers and drones to monitor the elephants 24 hours a day, evacuated roads for them to pass safely and lured them away from populated areas with food.

The herd's safe return from its journey is "very meaningful", said a notice released by the headquarters on Friday. "It provides us with a chance to know more about the elephants and also shows China's resolve in building an environmentally friendly country."

The Asian elephant is listed as an endangered species by the International Union for Conservation of Nature. The animal, which can be found in the areas of Yunnan bordering Myanmar and Laos, is also under first-class State protection in China.

Due to ongoing wildlife protection efforts, the number of wild Asian elephants in the province has increased from 170 in 1980 to 300 today. Their major habitats are in Yunnan's Pu'er city, Mojiang city and the Xishuangbanna Dai autonomous prefecture.

Shen Qingzhong, a senior engineer from the Xishuangbanna National Nature Reserve, said it's inevitable that the elephants will make another journey in the future as migration is a normal activity for elephants.

"Historically, Asian elephants used to live in many parts of the country. Migration is in their nature. It helps the species expand its territory and have more chances to improve its gene pool by mating with different groups," he said.

The forestry department and the provincial government plan to develop a national park, which aims to provide habitat protection for the elephants and a balanced relationship with residents.