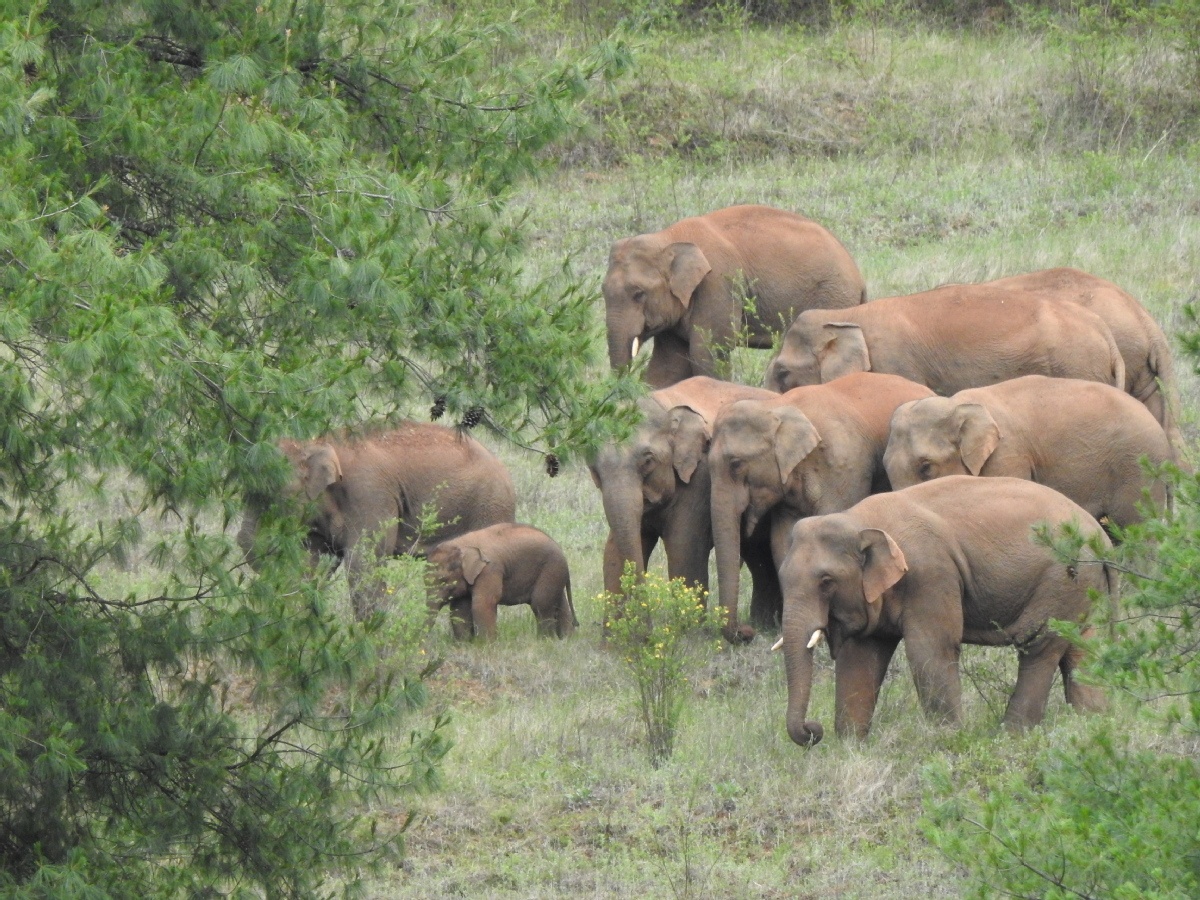 The trek of a herd of endangered wild Asian elephants in Yunnan province is unlikely to have been caused by human activities because their natural habitat is a heavily protected national nature reserve, according to experts.

And the so far safe handling of the event is mainly due to an effective monitoring and warning system, as well as joint efforts by authorities and local residents, they said.

As of Saturday evening, local authorities reported the 14 elephants of the main herd, including three calves, were roaming in Yimen county, Yuxi. A male elephant that left the group about a week ago reached Jinning district of Kunming, the provincial capital, straying about 15 kilometers from the group.

Chen Fei, director of the National Forestry and Grassland Administration's Asian Elephant Research Center, told journalists on Saturday that the elephants had left their forest habitat in the Mengyang region of the Xishuangbanna National Nature Reserve last year.

Elephants from the area have a habit of migrating, sometimes into human settlements, Chen said. In 1995, five Asian elephants marched north to Pu'er city. In 2005, a herd of 13 ventured west into Lancang Lahu autonomous county. Last year, a family of 14 females and three males left Mengyang and traveled south to the Menglun region of the reserve.

As of Saturday, that group was still in the reserve, and local authorities have been mobilized to protect the extensive plant life in the area, according to the reserve's forestry and grassland bureau.

"Asian elephants' roaming area has been expanding in all directions. Long distance migration of wild animals depends on the environmental conditions and the area's connectivity," Chen said.

"This time, a herd of 15 Asian elephants can go north all the way to Kunming unimpeded because there is plenty of food from farms and restored forest land along the way. The local government and residents have also escorted the herd and reduced the likelihood of human-elephant conflict."

Xiang Ruwu, the head of the department of fauna and flora of the Yunnan Provincial Forestry and Grassland Bureau, said in a news briefing on Sunday that the safe handling of the elephants' journey is due to effective monitoring and protocols, including a round-the-clock surveillance and warning system for elephant migrations launched in February.

While addressing speculation that the herd's trek was caused by human activities destroying the elephant's natural habitat, Chen said the reserve is State-owned and local authorities have strictly managed and protected its natural resources.

"There are no instances of forests in the reserve being severely damaged," he said, adding that over the last three decades, the number of wild Asian elephants in the region has grown from around 150 to 300.

These elephants are generally located in the reserve's Mengyang, Mengla, and Shangyong regions, Chen said, but wild animals may not recognize the protection zone borders drawn by humans.

To ensure long-term scientific protection for these animals, since 2016, the provincial Forestry Administration has been planning to create a national park for Asian elephants, "so the protection prospects are positive and optimistic," he said.