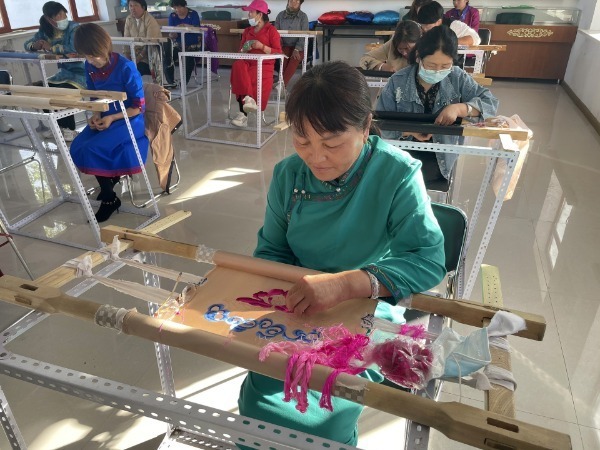 Basking in the morning sun in a seat against the window, Liu Menglan is doing magic on clothes, stitching life-like flowers with the dexterity of her hands.

For Liu and some other women from North China's Inner Mongolian autonomous region, the spacious embroidery studio has upended their lives - in a good way.

"I never imagined a life like this. My family earned almost 60,000 yuan (around $9,331) last year," Liu said in contentment. She is now capable of making as much as 40,000 yuan a year from embroidery products.

Liu and her fellow embroiders are just some of the 26,000 women from the Horqin Right Wing Middle Banner of Hinggan League to capitalize on their talent in embroidery and secure a stable income on their doorstep.

Back in 2015, Liu's extended family lived on an annual income shy of 5,000 yuan. "We couldn't even afford the forage for our sheep and didn't have anything left at the end of the year," Liu recalled.

In 2017, she began to learn embroidery skills in a training program supported by the local government.

According to the local government, 140 such training programs were launched in 173 villages across the banner. "The skills helped 2,895 impoverished rural residents increase an average of 2,000 yuan in their annual incomes," said Bai Jingying, a local official in charge of promoting embroidery skills in fighting poverty.

Liu's family has moved into a new home, and her husband works as a ranger, earning an annual income of over 10,000 yuan.

For some, traditional handicrafts, such as paper-cutting and carving, have enriched their daily lives.

Feng Suyan, a local from Tuquan county, has taken to the art form after she attended paper-cutting classes taught by Zhao Rixia, an intangible cultural heritage bearer of paper-cutting in Inner Mongolia.

"I started learning paper-cutting six years ago with Zhao. And now, when I see a new pattern, I would take a picture of it and cut it out," said Feng.

Zhao launched her own workshop in 2015. With the support of the local government, she taught over 1,000 students the art of paper-cutting. "Most of the students came to learn it just for fun," Zhao said.

"Paper-cutting represents a traditional culture. At the same time, it enriches people's lives during off seasons," Zhao added.

Feng is now a passionate paper-cutting artist. Whenever she is free, she will make a piece and share it on social media platforms.

"Even my son sensed that my life is becoming artistic," said Feng.