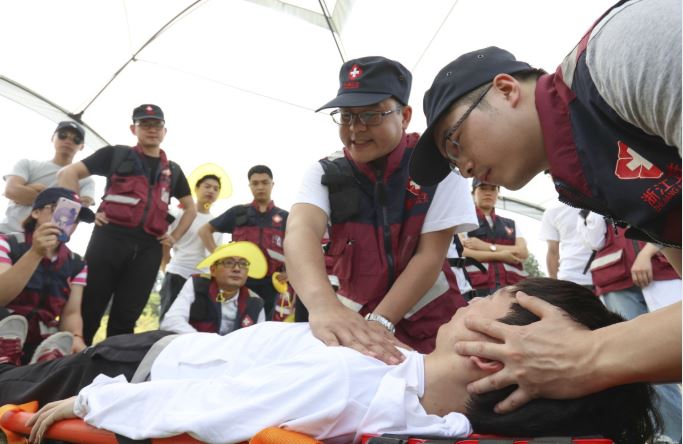 Medical workers conduct a simulated CPR operation during an exercise in preparation for a typhoon in Wenzhou, Zhejiang province, in May. (Photo: China Daily)

Mankind has never stopped fighting natural disasters. In modern times, creating an emergency warning and response system that can minimize casualties has been a key concern for governments around the world.Despite efforts worldwide, natural disasters with major casualties continue to make headlines.So China's latest reforms may be instructive.With the establishment of a central government body that oversees all natural disasters in the country, China has seen a decrease in both casualties and economic losses from natural disasters in the past half year.Super Typhoon Mangkhut, which wreaked havoc in southern parts of the country after landing in Guangdong province on Sept 16, illustrates the effectiveness of the newly established system. The typhoon killed six people and brought direct economic losses of 5.3 billion yuan ($769 million) on the Chinese mainland.But that was a significant improvement over the other three super typhoons of similar strength and trajectory in the past decade, including Super Typhoon Hato in 2017.The death toll and direct economic losses from Mangkhut were, respectively, only 17.5 and 22 percent of the average of those caused by the last three similar super typhoons, according to the Ministry of Emergency Management."The ministry dispatched three work teams to areas that were about to be hit by the storm to help local governments take precautionary measures. The major tasks of the teams were to evacuate people from dangerous areas, prepare facilities and materials needed for disaster relief and create emergency plans," said Guo Zhiwu, head of rescue coordination at the ministry.As Mangkhut came ashore, these teams immediately mobilized rescue efforts, both in the typhoon-stricken areas and also from outside of those areas to help local governments in their disaster relief work, he said.