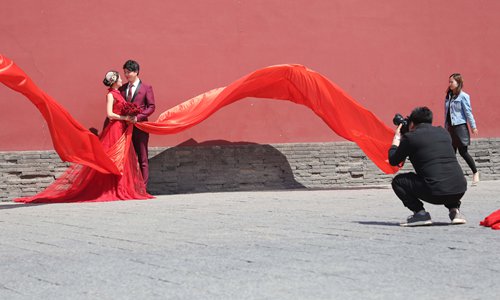 They pose as neighbors, colleagues or community workers and try to talk xiaosan - literally 'little three', the lover of a married man or woman - into ending their extramarital affairs. While this may sound like a premise for a movie, it is a service that is becoming increasingly widespread in China. The people who provide them are called "persuaders." Zhu Lifei is the founder of a marriage counseling agency based in Changzhou, East China's Jiangsu Province. He told the Global Times that he become a "persuader" in 2012 after discovering that about 75 percent of divorces are caused by extramarital affairs, based on his experience in the business. Since then, Zhu has opened branches in several cities in Jiangsu, including Wuxi, Suzhou and Nanjing, to offer marriage counseling as well as persuading xiaosan to end their affairs. An online search of "persuaders" or "persuading lovers to end affairs" leads to over 900,000 results on China's search engine baidu.com. According to media reports, these services can be found in many cities in China, including Beijing, Shanghai, Chongqing and Shenzhen. Costly businessIn the last year alone, over 2,000 couples came to Zhu for marriage counseling. He says he saved 351 marriages and successfully persuaded about 200 xiaosan to end their affairs. About 35 percent of these xiaosan were male. Zhu explained that many married women take on lovers out of revenge after discovering their husbands are having affairs.A typical "persuader" case can cost at least 100,000 yuan, and in some cases can even go up to a few million yuan, according to Zhu.Zhu's company will sign contracts with customers while their lawyers are witnesses, with terms covering length of time and payment.  "Persuading requires certain techniques. We normally adopt the method of awakening a xiaosan's consciousness, which means getting them to realize the consequences of their conduct. We also try and find a suitable boyfriend or girlfriend for the lover," Zhu said. In one example, a female college student agreed to be the mistress of a manager of a company. One of Zhu's female employees tried to get close to her and eventually became her friend. After convincing her of the error of her ways, she eventually persuaded her to leave the manager. Zhu's company later found the student a boyfriend. In many cases, "persuaders" have to pretend to be their target's neighbors, colleagues or community volunteers to get close to them and win their trust. "This necessary 'role play' is conducted in a kind-hearted way, and aims to let xiaosan better understand their behavior," Zhu said.However, Zhu does face certain risks in his job. In some cases, people who become xiaosan for financial purposes will hit back at their "persuaders" by verbally abusing them or slandering them online. "Persuading xiaosan to end their affair is just part of our job. We will also try to help the relationship of the couple involved and save their marriage," Zhu said. Zhu's company does this by offering them advice on how to improve their dressing style, conversation and even their sexual skills. Oversight neededPeng Xiaohui, a sexology professor at Wuhan's Central China Normal University, told the Global Times that "persuaders" help contribute to creating a harmonious country and society, and should be promoted in China. "It is part of marriage therapy, and in some universities in Hong Kong, it is listed as an official major, but there are no such courses in the mainland as far as I know," Peng said.  "China should come up with regulations to supervise the industry," Peng said. Zhu believes that the industry has good prospects, and lovers should be persuaded to abandon their affairs in a positive and kind manner from a third party, rather than being abused or, in some notorious cases, publicly beaten. However, Peng said that posing as someone else instead of identifying themselves from the beginning is deceptive, and although it may be harmless, some agencies that hire private detectives to spy on xiaosan may be breaking the law. "All the parties involved, including the couples and xiaosan, have the right to be informed of what's going on so that the agency can remain neutral," Peng said. He suggested that "persuaders" should have to pass certain psychological assessments before they are allowed to engage in the business.