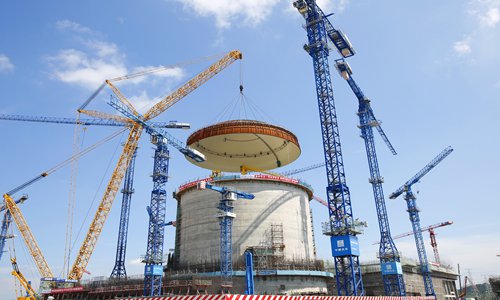 Chinese industry insiders said the new technology with the world's highest safety level and efficiency will be applied to those projects.

One of the three newly approved projects based in Rongcheng county of East China's Shandong Province is already under construction, reported Shanghai-based news portal thepaper.cn.

The other two in South China's Guangdong Province and Southeast China's Fujian Province are poised to start immediately, according to the report.

"But excess electricity has been used up in the past three years so we need to launch new projects," Lin said.

After the 2011 disaster at the Fukushima Nuclear Power Plant, China paused to increase the safety and technological perfection of nuclear power, Han said.

With approval for the three projects, the technology would be constantly reviewed, the nuclear power insider noted.

According to the announcement, CNNC Zhangzhou branch evaluated the environmental and residential impact of the three-month, 10 million ($1.45 million) yuan project.

The Chinese mainland had 45 nuclear power units in commercial operation, with an installed capacity of 45,895 megawatts of electricity, according to data released March 31 by the China Nuclear Energy Association.