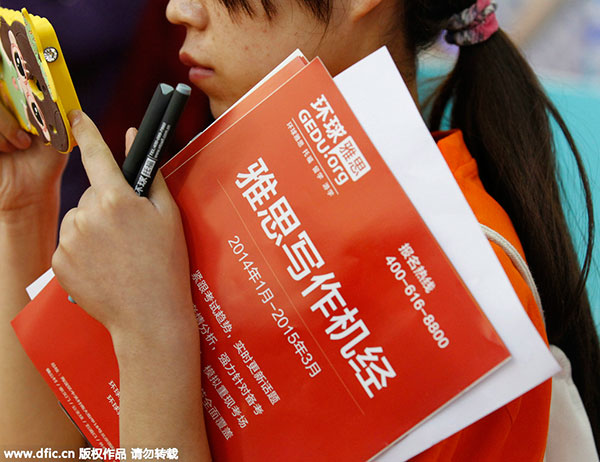 China's Standard of English Language Ability, or CSE, the country's first evaluation standard for English proficiency, has been linked with the International English Language Testing System and Aptis, marking its official entry into the international examination system.

The National Education Examination Authority under the Ministry of Education is developing an English exam that will apply the CSE standard to college students, said Yu Han, the authority's deputy director.

The authority and the British Council released the results on Tuesday.

The linking of IELTS and Aptis to the CSE displays the CSE's value in practical English learning, Yu said at a news conference.

"It also contributes to the opening-up of China's education, bringing its standards to the world and sharing Chinese wisdom in the field of language education," he said.

In 112 pages, the English proficiency standard lays down detailed requirements for listening, speaking, reading and writing. It also includes practical skills, such as translating, where standards are rare worldwide.

The CSE applies to all levels of English learners from elementary school to university and focuses on students' ability in everyday practical language, broader communication skills and understanding of the culture in English-speaking places.

The standards aim to unify various kinds of English tests in China that have different standards and clarify the educational objectives of English education in China. It can also guide the country's reforms in various English language tests, so they will be more focused on testing students' practical skills in using English, rather than skills in taking tests, Yu said.

Barry O'Sullivan, head of assessment research at the British Council, said: "Both IELTS and Aptis are communication-based tests, as they focus on all four language skills－listening, speaking, reading and writing－and assess test-takers' actual ability to use the English language, which lays a solid foundation for linking the two tests to the CSE."

The linking results will be of particular value to policymakers at educational institutions by helping them meet curriculum goals.

They will also encourage the improvement of teaching methods, learning materials and teaching practices in classrooms, he said, adding that the results will also allow test-takers to have a deeper understanding of their English proficiency by referring to the descriptions of language ability in the CSE that are mapped to their IELTS or Aptis test scores.

The national examination authority is also working on linking the standards with the Test of English as a Foreign Language, or TOEFL.