English hours less than other major subjects, but won't be de-emphasized at basic educational level: MOE 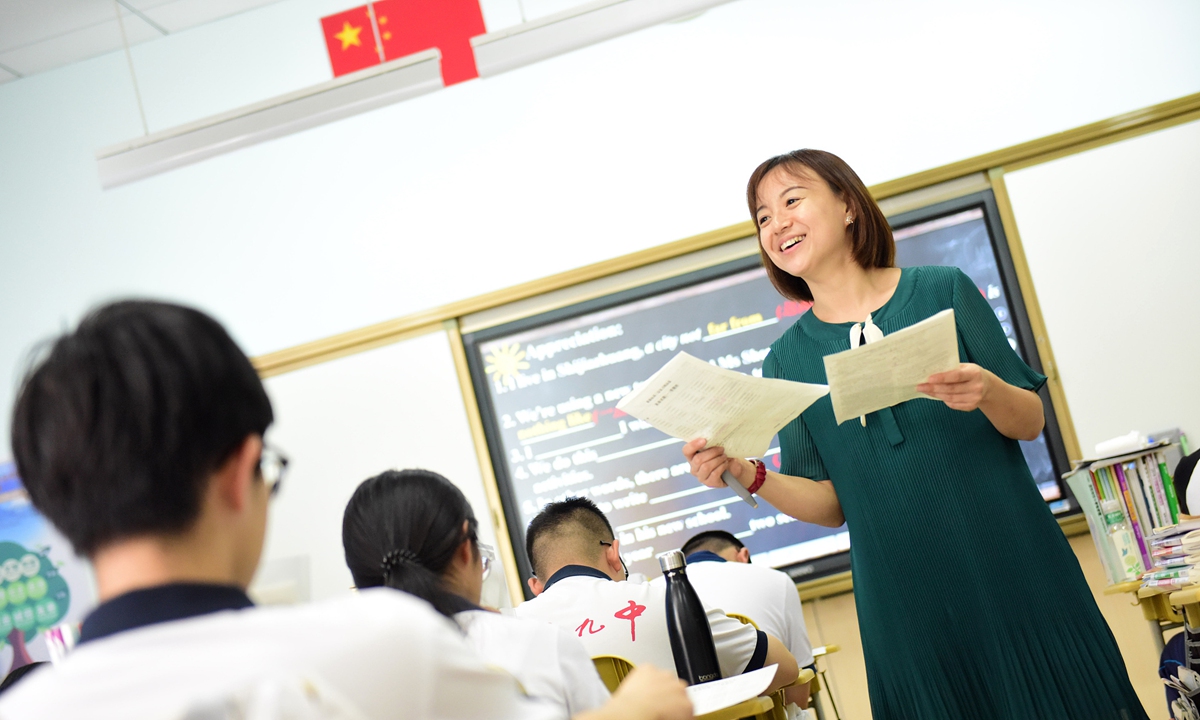 As debate rages once again over whether primary and secondary schools in China should further reduce the weight of English language teaching, China's Ministry of Education (MOE) said foreign languages learning plays an important role in cultivating students' international vision and cross-cultural communication skills, while stressing the importance of strengthening education that passes on traditional Chinese culture and reinforces culture confidence.

A response from the MOE to the suggestion raised by a deputy to National People's Congress has attracted wide attention over the weekend. The suggestion said schools could use the time taken away from foreign language education to increase the teaching of traditional Chinese culture in order to "exposing children to more Chinese culture at a critical time in the formation of their worldview, and increasing their cultural pride and confidence from an early age."

The "foreign languages" is generally referred to English in basic education.

"Foreign languages are an important part of students' overall moral, intellectual, physical and aesthetic development, and help cultivate and develop students' core literacy factors such as language skills, cultural awareness, thinking quality and learning ability, as well as their Chinese sentiment, international perspective and cross-cultural communication skills," the MOE said in a reply.

The MOE wrote that the curriculum arrangement for foreign languages is determined in accordance with the central government's top-level design for the gaokao (national college entrance examinations). According to the requirements published by the State Council, China's cabinet, in 2014, there will be no change in the subject settings and scores for Chinese, mathematics and English in the gaokao. According to the standards currently in place, these three subjects will carry the same portion of the total score in the gaokao.

The MOE pointed out that the proportion of foreign language hours in the total number of hours in basic education is 6-8 percent. This is less than 20-22 percent for Chinese, 13-15 percent for math, or 10-11 percent for physical education.

According to the curriculum standards currently in force, the teaching of Chinese, politics, history and other subjects has been organically integrated into education about traditional Chinese culture. Moreover, the content of Chinese traditional culture is included in the gaokao.

Discussion about reducing the proportion of English in basic education and in the gaokao has taken place frequently over the past decade amid calls for rising attention to the teaching of the Chinese language and physics as Chinese people are showing a growing confidence in their culture.

In the new curriculum standards, the goals of students learning English at the basic education level include "comparing the similarities and differences between Chinese and foreign cultures and deepening their understanding" and "strengthening the identification with Chinese culture."

English is still the world's lingua franca. Chinese people need to be more proficient in English in order to be exposed to the frontiers of human knowledge, which is essential for China at a time of rapid development, Chu Zhaohui, a research fellow at the National Institute of Education Sciences, told the Global Times on Sunday.

"Learning English is not just a way to learn a language for Chinese students, but a way of thinking and a vision," he said. "Learning English will not affect students' learning and absorption of traditional Chinese culture, but it can even serve as a kind of integration and facilitation."

He said that more than whether English is over-represented in basic education is how to improve the ineffective and exam-oriented mode of English teaching that prevails in China.