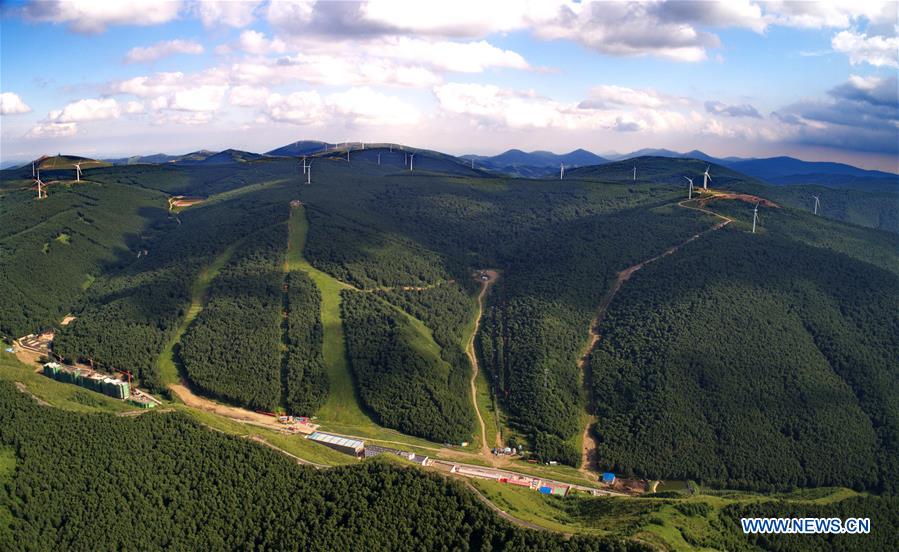 Photo taken on Aug. 24, 2017 shows a forested area in Chongli District of Zhangjiakou, north China's Hebei Province. The city government has made lots of efforts in its ecological construction in recent years. (Photo； Xinhua)

A report on the implementation of the Air Pollution Control Law, which uncovered problems and put forward targeted measures, was submitted for review at the session.

When delivering the report, Li Zhanshu, chairman of the National People's Congress (NPC) Standing Committee, said since the 18th Communist Party of China (CPC) National Congress in 2012, central authorities have waged a war on air pollution with unprecedented strength and pragmatic measures.

Stating that making the skies blue again is the top priority for pollution control, Li called for efforts to comprehensively and efficiently enforce the Air Pollution Control Law and control pollution through legal means.

China has identified preventing and controlling pollution as one of three "tough battles" in the process of building the moderately prosperous society, along with forestalling and defusing major risks, and carrying out targeted poverty alleviation.

The 13th NPC Standing Committee has put air pollution inspections high on its agenda in its first year of performing duties.

The top legislature's session is held every two months, but can be convened temporarily for special purposes. The report on the implementation of the Air Pollution Control Law, which was originally scheduled for the session in August, was deliberated at the extraordinary session in advance.

According to the inspection report, China's air quality has improved across the country and the implementation of the action plan on air pollution control has seen positive achievements.

According to the report, the main reasons for air pollution in some regions are irrational industrial structure and layout, and unreasonable energy structure and transportation structure.

In another case, Linfen City in Shanxi Province was found to have fabricated environmental monitoring data from April 2017 to April 2018, with major enterprises failing to publicize their pollutant discharging information timely, accurately and completely.

The report also raised a number of suggestions to fix the problems, calling for efforts to formulate supporting policies and strengthen supervision on law enforcement.

A regulation on issuance of pollutant discharging licenses should be in place by the end of 2019 to manage stationary pollution sources and coordinate efforts to control multiple pollutants, it suggested.

Environmental protection authorities are asked to put into force a list on toxic and harmful air pollutants by the end of this year, it said.

Local legislatures are encouraged to formulate laws on air pollution control ahead of national legislation and provincial-level people's congresses and their standing committees should make or revise their regulations according to reality, it said.

The NPC Standing Committee sent four teams to eight provincial-level regions to check the implementation of the law from May to June. It also entrusted local legislatures in 23 other provincial-level areas with law enforcement inspections.

In Linzhou, central China's Henan Province, a leading local official said that the first thing he does in the morning is to open the window and check whether Taihang Mountain can be clearly seen. "I immediately get nervous if the smog in the city obscures the mountain," the official said, hinting at his increasing sense of responsibility.

China has formulated a series of measures to ensure governments and enterprises bear due responsibilities in air pollution control in recent years, making it clear that the major official of an administrative region shoulders ultimate responsibility in environmental protection in the region.

Targeting at perfunctory local officials, the inspectors innovated their mean of inspection by holding a symposium attended by representatives of legislature at all levels and the public, as well as inviting local officials and business owners to sit a pop quiz on air pollution control.

"The attendees are required to finish 10 questions within five minutes," said Zhang Shuli, deputy head of the Department of Environmental Protection of Inner Mongolia Autonomous Region.

Cheng Lifeng, a member of the inspection team and NPC Standing Committee, said the quiz results showed that studying the law is still not enough for some officials and business owners, and some are even unfamiliar with important laws and regulations.

Photo taken on Aug. 24, 2017 shows a forested area in Chongli District of Zhangjiakou, north China's Hebei Province. The city government has made lots of efforts in its ecological construction in recent years. (Photo； Xinhua)