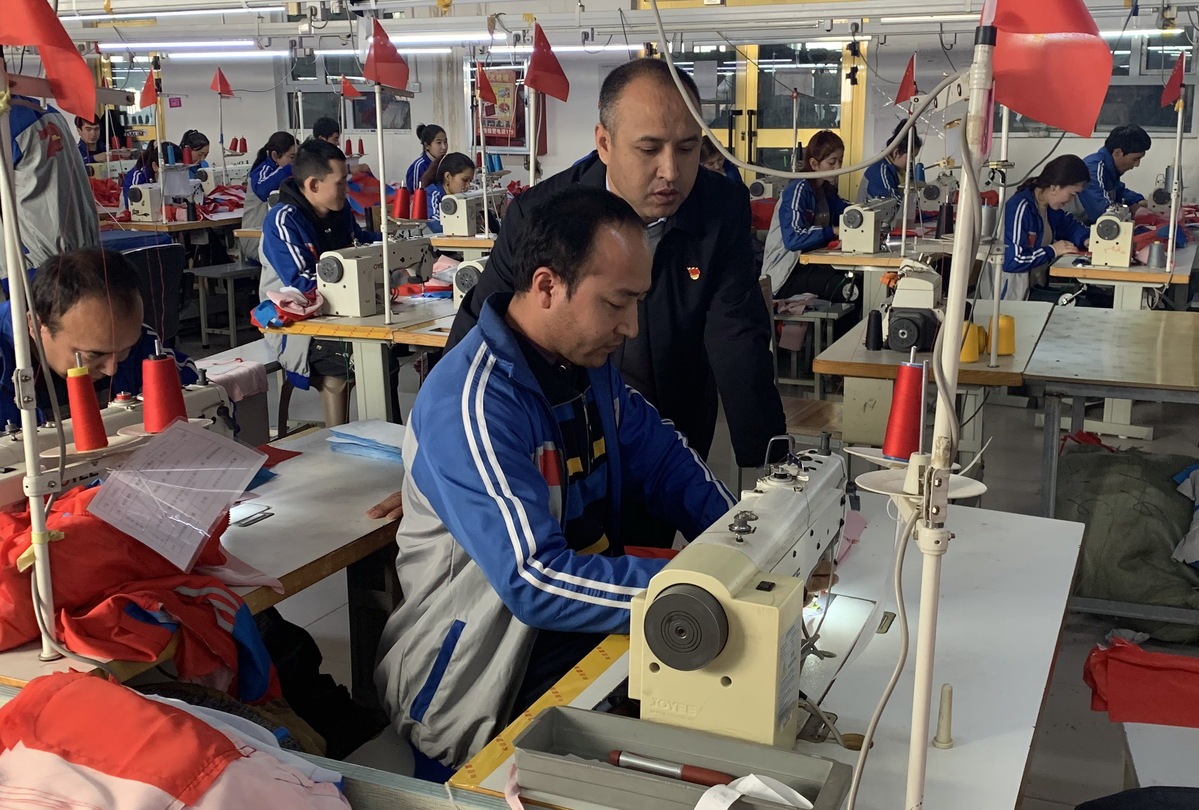 "I feel even happier than my employees when I see the bright smiles on their faces," said Obulasan, a winner of the innovation award for national poverty alleviation in 2019.

Obulasan said he would not be satisfied if he were the only one to become rich in his village.

"I hope I can help more poor families in the village get rid of poverty and become rich in the coming years," he told China Daily.

Obulasan, 39, was born into a poor family in Lagan village in Moyu county, located in the southern part of the Taklimakan Desert in Xinjiang.

Due to the tough geographical environment, Moyu has been a poverty-stricken county in the country for decades, and most of the families in the village are poor.

Obulasan left home and moved to Shanghai to start his business selling jade and snacks in 2001. But the entrepreneur never forgot the poor people in his hometown and wants to help them shake off poverty.

Once Obulasan had acquired enough wealth after working for a few years, he returned to Xinjiang and eventually established his own garment factories in 2010, employing local villagers to fulfill his grandfather's wishes.

"My grandfather was a member of the first Communist Party of China group in my village, and he always encouraged his fellow villagers to work hard to escape poverty when he was Party chief of the village," Obulasan said. "He always told me not to forget the poor villagers if I became rich in the future."

Many villagers, particularly the women, can do needlework. Thus, establishing garment processing factories was a good way to help bring jobs to locals, he said.

Obulasan set up his garment processing cooperative, one of the first to be established in Hotan prefecture.

With the support of preferential policies introduced by the local government and the great efforts he has made, the garments and related products that Obulasan's company produces quickly became bestsellers in local markets.

His company has built 11 workshops in four counties, employing more than 1,500 local residents.

Furthermore, in 2013, he established a vocational training school, encouraging residents to learn Mandarin, working skills, laws and related knowledge to master the abilities and skills to help them shake off poverty.

The lives of many residents have gradually gotten better after being employed in Obulasan's company.

Buzainap Jappar said the living conditions of her family have been fundamentally improved since she began working at the cooperative.

Buzainap has been disabled since she was 5 years old after she failed to receive timely treatment for a high fever. She began working in Obulasan's garment factory after completing a training course at his school. She now earns more than 2,500 yuan ($358) a month.

Buzainap's colleague Turnisa Samat said she can now send 80 percent of her salary-which is also 2,500 yuan a month-back home every month to help her parents.

Turnisa, 19, said her father was in poor health, and her five-member family used to rely on the little income they earned farming before she was employed after graduating from a local vocational school a year ago.

"Food and accommodation are all free since I became a worker at the company," she said.

Munira Muhtar, a workshop director, said she can earn from 5,000 to 6,000 yuan a month. Combined with her husband's salary, the family can earn a monthly income of more than 10,000 yuan.

Munira's husband is a director in the company's general office.

"We plan to purchase a car this year since we have been offered a free apartment by the company," Munira said.

Obulasan's company has grown to include a headquarters and 11 small factories, covering an area of 13,000 square meters.

The company has now become one of the key enterprises in Hotan with an annual output of more than 80 million yuan, playing an important role in helping locals get rid of poverty. Moreover, in 2019 Obulasan invested more than 5 million yuan to build a special commercial street that combines commercial trade, tourism and sightseeing, culture and entertainment, farm restaurants and garment processing.

The commercial street employs more than 150 people from poor families in Lagan village.

In addition, a supermarket and a barber shop have been built in the village. The supermarket regularly offers free meats, vegetables and daily use articles to poor families and free garments to students, while the barber shop provides free service to poor villagers.

Lagan is now connected with other cities and counties in Xinjiang by highways and has been equipped with tap water.

Most of the families in the village have escaped poverty. The average per capita annual income of local villagers reached more than 8,400 yuan in 2018.

With his achievement in local poverty alleviation, Obulasan also won the National May 4th Youth Award and was chosen as a model worker in Xinjiang.

Obulasan is currently deputy chairman of the Xinjiang Youth Federation and a member of the Standing Committee of the Federation of Industry and Commerce.

Obulasan said he will continue his efforts to help more people shake off poverty in the following years.