Jing Fengying, 57, and her husband are parents to four youngsters at a home for orphans and abandoned children in Hohhot, capital of the Inner Mongolia autonomous region. 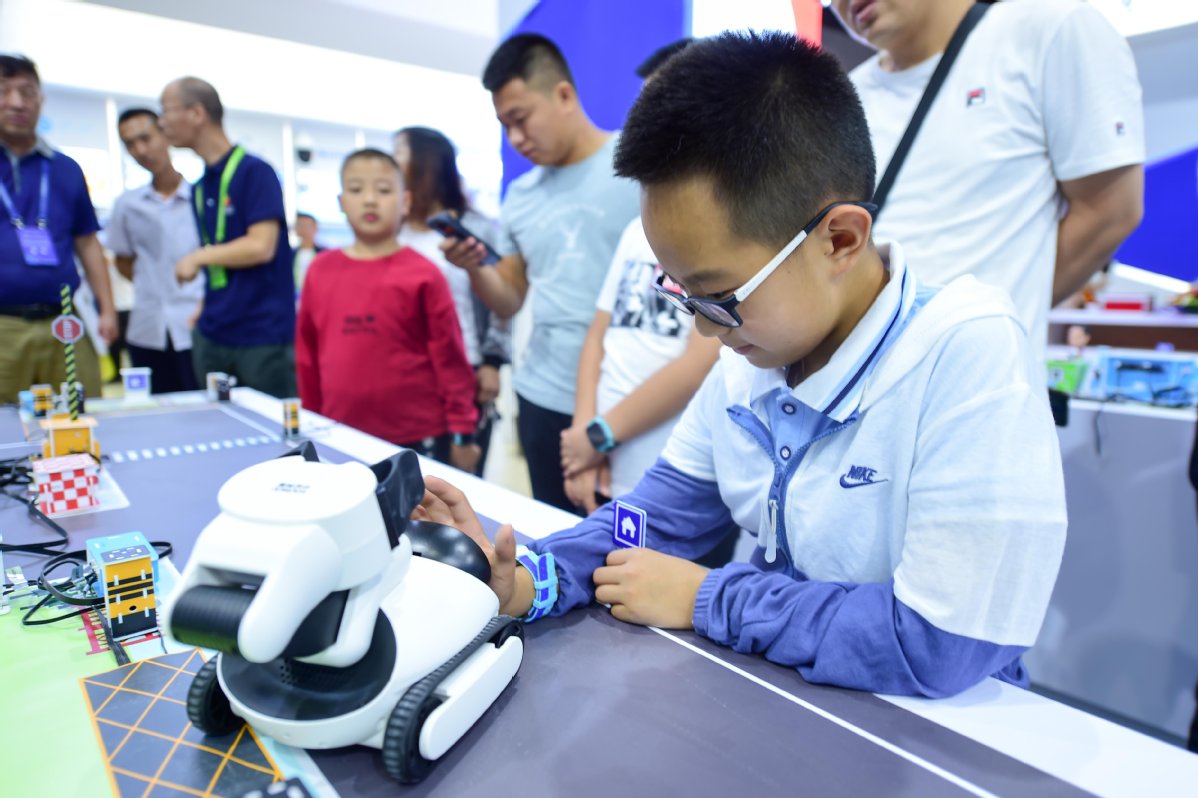 A student at an innovation expo in Ulaanqab of the Inner Mongolia autonomous region explores a gadget on Aug 12. (Photo: Xinhua)

Three-month-old Zi Ang, one of the four children, has Down syndrome, a condition usually associated with intellectual disability, a characteristic facial appearance and weak muscle tone in infancy. Also, one of the children has a cleft lip.

"I have worked in the institution for 10 years," Jing said.

In January 2014, when President Xi Jinping visited the institution, he spoke highly of the "families" for the children, she said.

Jing has been a mother to more than 20 children in total. "Almost 98 percent of the children in the institution are either physically or mentally challenged. We have to care for them with a lot of attention and patience," she said.

The institution is a local government-funded home for orphans and abandoned children, according to Zhang Yang, deputy director of its education section. Besides raising the children, it takes care of their education and medical treatment, Zhang said.

The institution also helps its children find foster parents or places to work when they are over 18 years.

The regional authorities have worked hard to improve the livelihood of its people in recent years, in line with the president's emphasis on the region. As early as 2009, Xi had inspected places including Hulunbuir, Baotou, Ordos and Hohhot. He said the local people's problems should be resolved quickly, and the benefits of the country's reform and opening-up should reach all the ethnic groups.

Inner Mongolia is home to a mix of ethnic groups, including the Mongolian, Manchu, Hui, Ewenki and Korean groups.

Following Xi's instructions to not rest until the people's problems are resolved, the local government has geared up its work on poverty alleviation and the provision of pensions and medical services.

In July, the president visited Inner Mongolia again and said the region needs to promote the growth of its animal husbandry and urban-rural development.

While stressing on environmental protection and green development, Xi also called for efforts to improve people's well-being and to focus on helping out areas experiencing extreme poverty.

In April, the regional authorities called a meeting to discuss the impact of industrial growth on the environment. The local government said it would target projects with high levels of pollution and energy consumption.

"We won't pursue short-term growth at the cost of the ecology and environment," said the autonomous region's Party chief, Li Jiheng. "We don't want a 'polluted' GDP."

The local government has lifted 1.41 million people out of poverty since 2013 and allocated 70 percent of its budget to improving welfare facilities, said Ma Xuejun, the region's vice-chairman.

Sixteen years ago, Wang Ruhe, 58, almost followed in the footsteps of other people in Qihetang village of Linxi county in southeastern Inner Mongolia to relocate his family to seek a better life.

Wang grew millet and corn, which earned the family only 1,500 yuan ($213) a year. He could not make ends meet, let alone afford his son's educational expenses. Every time the child's new school term began, Wang had to borrow money from his relatives.

Yet, the couple stayed on in the village. Their life has improved now, thanks to a policy adopted in 2003 to encourage local farmers to grow fruit trees. The "conversion of cropland to forest program", also known as "grain for green", helped many local farmers.

Wang waited three years to see how the policy would improve villagers' lives. It was worth the wait. He began to grow apple, pear and plum crops, from which he now makes 90,000 yuan a year. Qihetang village has also become cleaner, greener and wealthier.

Inner Mongolia stretches from the expansive Hulunbuir grasslands near the Russian border in the northeast, to the Gobi Desert in the west.

The region, with a population of 25 million, is known as a land of bread and milk. It is also home to large reserves of resources such as oil, iron, coal and geothermal energy. Its energy sector contributes to more than half of the autonomous region's industrial output.

The region's northern area is known for animal husbandry and the south for its farming.