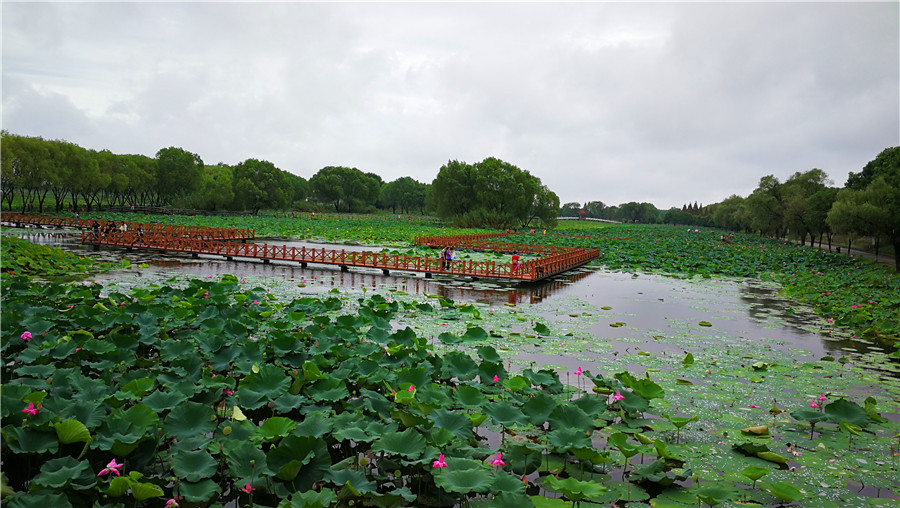 Chen Yuxiang lived on Honghu Lake in Central China's Hubei province for 40 years since his birth. He now works as a machine operator at a shoe factory.

"I used to live on Honghu Lake and made a living as a fisherman, but the water became heavily polluted and we had to find another way to earn money since there were hardly any fish in the lake," Said Chen, 41.

Now, after a string of environment protection campaigns, all the fishermen have left the waters and now live and work onshore with the help of government, restoring Honghu Lake's charm and beauty.

Honghu Lake, the seventh biggest freshwater lake in China, was "a place better than paradise," as a popular song goes, with abundant fish, lotus and ducks.

In the 1980s, a crowd of fishermen from the east of China rushed in and settled down on Honghu Lake due to its rich natural resources.

With more and more people gathering at the lake, it became overrun with fences and nets used to trap fish. Pollutants discharged by residents living in the area went directly into the lake, and water quality went from bad to worse.

"We could drink directly from the lake at the beginning, but a few years later, the water began to stink, and we had to buy bottled water onshore" Chen recalled.

Overfishing and other human activities put the lake in crisis.

Realizing the need to clean up the lake, the local government took a series of protective measures including relocating all the fishermen and getting rid of all the fences and nets.

Under the government policy on relocation of fishermen, Chen got 170,000 yuan (around 25,368 U.S. dollars) of subsidy after moving onshore. Using the subsidy, the 110,000 yuan he got from selling his boat to the government and his own savings, he bought a nice apartment not far from his workplace.

In addition, a job was arranged for him by local authorities, who also offered free skill training to every fisherman onshore.

"In the past, I would have never imagined that one day I would live onshore working and have my own house. All of this would not have happened without the help of the government," said Chen.

Now, after continuous efforts, the lake is coming back to life. Water quality has largely been rehabilitated and the number of wild birds living on the lake has risen from 2,000 to more than 100,000.

The local government also set up three lake-patrol stations around Honghu Lake to protect the water, plants and wild birds, guarding a water area of 17,000 hectares around the clock.

"The water is clean again, ducks are coming back and I'm so glad to see all the changes," Chen said.

Recalling the old days living on boats, Chen Yuxiang said that the life was hard. "Children had to be bound by a string in case they fall into the water, and education and medical treatment were two big problems, but such inconvenience and worries will never come back again."