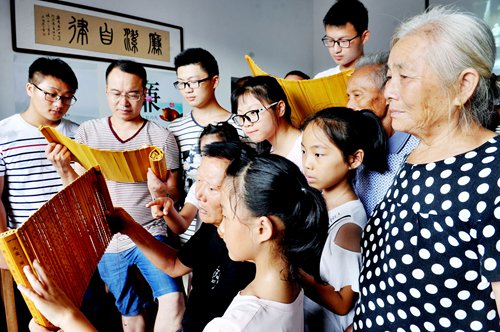 Family values have been considered the most significant influence on individual behavior since ancient times in China. Now, they are expected to help protect the environment.On the wall of Lu Yuming's house in Changshui village of Jiangxi Province hangs a scroll bearing his family's values, some of which have survived over 1,000 years.In addition to the clean and simple words emphasizing traditional Chinese virtues such as duty, filial piety, integrity and loyalty, the respected and elderly members from the Lu family suggested adding something new - "Respecting nature and protecting the environment."The suggestion was approved by over 200 households who have the surname Lu in the village in 2013.Family values written by wise and respected forebears have been used by Chinese to enlighten future generations. They establish a code of conduct in the home and in society at large.Lu's family has updated their pedigree and modified their family values every decade or so according to the changes in the world. The addition of "protecting the environment" was the 19th modification since they moved to the village in the Song Dynasty (960-1279)."We added environmental protection into our family values because we learned a painful lesson a few years ago," said Lu.Changshui is surrounded by forests and mountains, leaving villagers with little farmland. In the 1980s and 1990s, they had to make a living by selling trees."I cut down many trees, which I now regret," said Lu, 64."We even sold a 500-year-old Chinese yew," said villager Yu Jingchun who once owned a furniture plant near the village.Due to the excessive deforestation, many hills in the village became bare. When there was a thunderstorm, mud and rocks rushed into the river, which was the main source of drinking water for the villagers. Young people gradually left their hometown to seek jobs in cities."Looking around our village, we started realizing what terrible things we had done," said Lu.There was a chance for villagers to rectify their errors in 2004 when Changshui village became a pilot zone of China's household contract system in the management of collective forest land and ownership of wood. Around 8,267 hectares of forest land in Changshui were contracted to villagers."We began to plant trees on the bare hills," said Lu. Over the past 15 years, the villagers have created a forest covering an area of more than 200 hectares.Trees have brought them fortune. Through developing industries like tourism and bee raising, the per capita net income of Changshui villagers reached 16,137 yuan (around $2,432) last year, 2,000 yuan more than the average figure in the county.To set a code of conduct for future generations, Yu's family bans cutting down trees and the Zhang family added "loving nature and protecting the environment" to their family values.All big families once had "ancestral halls" where they gathered to honor virtue and punish transgression, according to the norms set by these documents.Since these halls no longer exist, family elders have come up with new ideas to ensure that family values have a role to play.In many villages of Wuyuan county, if someone is found cutting down trees, he must write a letter of apology."He would even be asked to slaughter a pig he raised and offer the pork to others for free if he makes a serious mistake," said Dai Xiangyang, Party chief of Changxi village. Pigs are usually slaughtered when villagers need some money or during the Spring Festival.Children are not immune from punishment either. Years ago, Lu's 8-year-old grandson snapped off many branches from a Chinese yew seedling when he played outside.He had to kneel on the ground for two hours, skip two meals and write almost 2,000 Chinese characters in a letter of apology."I hope my children will remember that a price must be paid when they harm the environment. If not now, it will be paid tomorrow," Lu said.